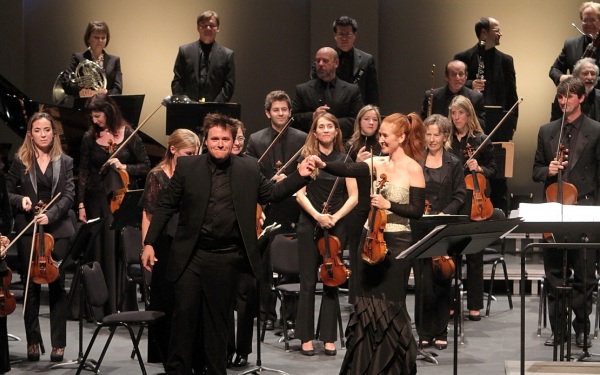 One of the best bargains in the city available to college students ages 17 to 30 is Los Angeles Chamber Orchestra's (LACO) “Campus to Concert Hall All Access Pass,” which provides admission to eleven concerts during LACO's 2015-16 season for just $30. The Pass allows holders to attend all seven Orchestral Series concerts at either Glendale’s Alex Theatre or UCLA’s Royce Hall; all three Westside Connections programs, which this year highlight the connections between music and the brain, at Santa Monica’s Moss Theater; and the Discover Bach’s Cantata, “Sleepers Awake” program at Pasadena's Ambassador Auditorium.

As an added bonus, the Pass includes access to performance after-parties where students can mingle with musicians; an invitation to a LACO rehearsal; advance reservation privileges; and the option to reserve up to three additional tickets at just $12 each for college friends (valid college ID required). This popular student pass, offered for the fifth year and sponsored by Marina Graphics, is designed to build appreciation for classical music among younger audiences.

LACO has a long history of educational outreach to the student community, and is particularly focused on bringing students inside the concert hall to experience the Orchestra’s live performances in world-class venues. The ‘Campus to Concert Hall All Access Pass’ makes it affordable for students to attend multiple performances for about $2.80 per concert, much less than the cost of a movie or a latte. The pass is available to students new to classical music as well as those who are seasoned concertgoers. LACO also offers Student Rush tickets at $12, but the ‘All Access Pass’ makes tickets are even more affordable and enables students to reserve tickets in advance.

LACO presents several other vital outreach programs integral to LACO’s mission of nurturing future musicians and composers as well as inspiring a love of classical music. In addition to the “All Access Pass,” the orchestra hosts 3,200 fourth-, fifth- and sixth-grade students of varied cultural and musical backgrounds each year through “Meet the Music,” a series of eight live performances of classical works and often an upcoming program's soloist at Zipper Hall. LACO also offers free concert tickets and transportation to LACO concerts to "in need" community service organizations through its “Community Partners” program.

The intensive “LACO-USC Thornton Strings Mentorship Program,” launched in 2010, enhances the preparedness of strings students for a professional career with select Thornton students invited to participate in a mock audition that may lead to an opportunity to perform in the string section of the Orchestra for a LACO concert. Additionally, LACO offers Master Classes, including in-depth composition Master Classes led by LACO Composer–in-Residence and Pulitzer Prize-finalist Andrew Norman for the AP music class at North Hollywood High School, providing vital mentoring to a new generation of musicians and composers. This season Norman also visits several fourth-, fifth, and sixth-grade LAUSD and charter school classrooms to introduce the joy of music and music composition to younger students through an engaging interactive presentation.

More information on the "Campus to Concert Hall All Access Pass" is available at laco.org/college, where students can purchase it online.

Los Angeles Chamber Orchestra (LACO), proclaimed “America's finest chamber orchestra” by Public Radio International and “resplendent” by the Los Angeles Times, has established itself among the world's top musical ensembles. Since 1997, LACO has performed under the baton of acclaimed conductor and pianist Jeffrey Kahane, hailed by critics as “visionary” and “a conductor of uncommon intellect, insight and musical integrity” with “undeniable charisma,” “effortless musicality and extraordinary communicative gifts.”

Under Kahane’s leadership, the Orchestra maintains its status as a preeminent interpreter of historical masterworks and a champion of contemporary composers. During its almost 50-year history, the Orchestra has made 31 recordings, toured Europe, South America and Japan, performed across North America and garnered eight ASCAP Awards for Adventurous Programming.

Headquartered in downtown Los Angeles, LACO presents its Orchestral Series on Saturdays at Glendale’s Alex Theatre and on Sundays at UCLA’s Royce Hall; Baroque Conversations at downtown Los Angeles’ Zipper Concert Hall and USC’s Bovard Auditorium; Westside Connections chamber music series, designed to illustrate the relationship between music and other artistic disciplines, at the Moss Theater in Santa Monica; and an annual Discover concert, which features an in-depth examination that sheds new light on a single piece of music, at Pasadena’s Ambassador Auditorium.