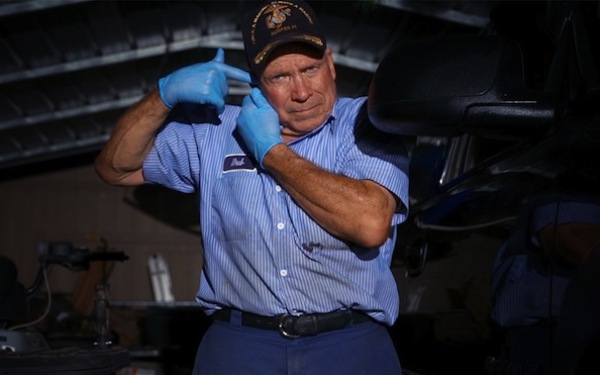 It’s a matter of us versus them, or at least that’s what we’ve grown accustomed to feeling and believing when it comes to our, the citizens’, relationship with the very people we hire to protect us. The police and everything it encompasses has throughout the years steadily become a force of not admiration and honor, but menace, fear, and mistrust—a shift that has caused an extreme rift in our own categorization of safety. For this reason alone, Peace Officer, a documentary about the wild expanse of police militarization, is a necessary and formidable investigation of the people we once called heroes.

The two directors leading us toward insight of this complex and precarious rift between the citizen and the police are soon-to-be-known Scott Christopherson and Brad Barber, two guys with lots of shorts under their belt, but now have a meaty narrative to show off. The task of embodying the evolving issues of police militarization must have been daunting, but after receiving such awards as SXSW’s Documentary Audience and Grand Jury Prize Awards, it can be said with much confidence that something willfully important was captured in Peace Officer.

It begins with a man who had a vision of bringing peace to his small town thirty years ago when he once reigned as sheriff. Taking note from the first SWAT teams organized in Los Angeles after the Watts Riots, “Dub” Lawrence thought that by implementing that same template in his town—a template that promised organized, tactful protection to its citizens—that a meaningful step was being taken towards a better community. Because, back then, that same notion of community was what defined a policeman’s role, where his relationship with a person he served was one based off of respect and communication.

To Lawrence’s dismay, he had to watch as the same SWAT team he fathered unnecessarily strike down his son-in-law in a long-winded stand off. How could the very institution that he once led, and then, as a retiree, relied on to carry out justice in a responsible and honest way, go on to betray its own profession and community? This is what he wanted to find out.

The richness of Peace Officer rests in its ability—one that all documentaries should at least attempt to do—to take account of multiple perspectives that have equal weight and measure on the rightfully contentious subject of police brutality. While Lawrence meticulously and obsessively pieces his son-in-law’s case together, as well as investigates other incidents that exemplified unnecessary police tactics, we gain insight into the machine that is not only the police force, but also the psychology of what it means to protect versus aggravate. Interviews with current and ex-cops who were involved in shootouts where suspects, who may have had reason to be questioned, were unnecessarily harassed, wounded, or even killed, detail the unrivaled complexities of being in a life-threatening situation. Lawrence may be the central subject of focus, but it’s the inclusion of the cops who refuse to stand down and admit fault in situations that most of us cannot fathom where we begin to understand why middle ground has been scarcely found in recent years among the enforcers and the enforced. Barber and Christopherson know that, if we are to make headway in the search for a trustworthy police system, then we must take into account the experiences of those who live it daily and who’s decisions are constantly weighed and measured in life or death terms.

There is one word that does seem to be left out of Peace Officer’s message, and that is “race.” While it is true that the issues of a heightening militaristic police extend far passed race, we cannot simply ignore the facts that a majority of them are proliferated by racial prejudice. As wide of a reach in points of view that the directors embrace, its surprising that not even one testimonial is by a black individual. This is by no means to say that the film should have focused on issues of race, but it seems neglectful to ignore it completely when it is such a driving force of our social conversation today.

Taking that into consideration, Peace Officer is a step in the right direction in extending awareness of a current and ever-evolving climate of doubt that engulfs our police culture, but is by no means the end game. Barber and Christopherson, with deft and succinct storytelling, shake us awake to what is a living nightmare—a nightmare in which our saviors have become our grim reapers. With that realization, we can, hopefully, be able to look ahead to rouse ourselves to change.

Peace Officer opens in NYC on Wednesday, Sept. 16th, and LA at the Nuart Theater on Friday, Sept 18th.