Early impressions: USC, UCLA might be for real, SEC not so much 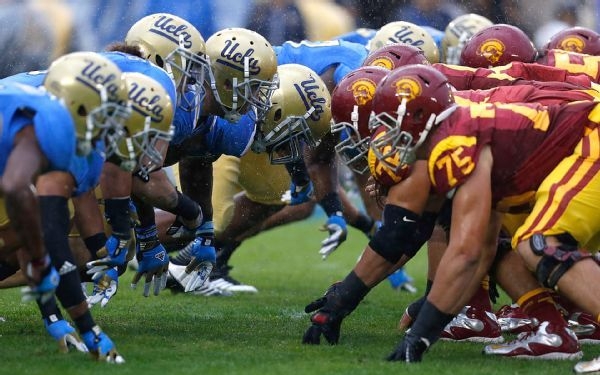 Making proclamations on college football after two weeks is about as shaky as having a late lead on Brigham Young, or thinking someday the USA Today coaches poll will get a clue.

Sunday, yep, the whistle blowers blew it again, dropping Auburn and Oregon eight positions each for their Saturday performances.

Auburn nearly lost at home to lower-division Jacksonville State, while Oregon lost on the road, by three, to top-10 Michigan State.

The Associated Press circled closer to the wobbly truth by dropping Auburn 12 spots and Oregon only five, while the Football Writers Association of America’s “Super 16” found the sweet spot by demoting Oregon only two spots, to No. 9, while dropping Auburn from sixth to “take a hike.”

What we extracted from the weekend were inklings and feelings more than conclusions, like a paleontologist brushing a molar loose from a dinosaur dig site.

Every week, though, you get to piece together more bits of information.

Some early thoughts and observations:

UCLA and USC may be the best teams in this year’s Pac-12 Conference. Forget the opponents and the scores. USC cleaned and gutted two Sun Belt teams, Arkansas State and Idaho, by the total score of 164-15. It was the biggest pair of opening blowouts since Pete Carroll’s 2005 team bounced Hawaii and Arkansas by the sum total of 133-34.

Forget, also, the superficiality of UCLA beating up on Virginia and Nevada Las Vegas.

Local wins over Arkansas State and Virginia meant little without some context, but now we have some.

Arkansas State followed its 55-6 loss to USC by losing by only one touchdown, at home, to Missouri, the two-time defending East Division champion of the Southeastern Conference.

That could mean that Arkansas State is not as bad as USC made it look.

UCLA soundly defeated Virginia in its opener and then watched the Cavaliers nearly pull off a major upset against Notre Dame, a team some consider a national title contender. The Irish needed a touchdown pass with 12 seconds left to escape defeat in Charlottesville. That could mean UCLA, with freshman quarterback Josh Rosen, is the real deal.

Oregon proved it still must be respected and feared after a tough 31-28 loss at Michigan State. The Ducks aren’t quite yet in sync with first-year starter Vernon Adams Jr. at quarterback, but he’s been on campus only a month, and you can see how they can get there. Adams missed a wide-open Byron Marshall for what could have been the game-winning touchdown in East Lansing. Adams is not Marcus Mariota, but he is nimble, talented and tough.

The rest of the Pac-12 might be ho-hum. Arizona State needed two fourth-quarter touchdowns to break a 21-21 tie with lower-division Cal Poly.

The Sun Devils were lucky their game wasn’t seen by a larger audience after negotiations broke down to finally get the Pac-12 Network on DirecTV.

“I’ll take all the ugly wins I can get,” Graham said after escaping Cal Poly.

Stanford “rebounded” from its loss at Northwestern with a 31-7 home win over Central Florida. The Cardinal started sluggishly, again, but eventually found some offensive rhythm. Still not enough, one would think, to defeat USC next Saturday in the Coliseum.

The next person who says “Luck of the Irish” must be escorted from the room.

There could not possibly be a more unlucky team than this year’s incarnation of Notre Dame. Through two games, the Irish are down a starting defensive lineman, a starting running back and a starting quarterback. Notre Dame lost quarterback Malik Zaire (broken ankle) for the season in the win over Virginia. The only good news is the Irish are 2-0, coached by Brian Kelly and have a backup who exudes confidence. DeShone Kizer stepped in for Zaire and tossed the game-winner to Will Fuller.

“I have no doubt in my ability to be the quarterback for Notre Dame,” Kizer said.

BYU, now there’s a lucky team. The program trying to emulate Notre Dame as an independent has won two games now, against Nebraska and Boise State, on Hail Mary passes. The Cougars were not lucky to lose quarterback Taysom Hill to another season-ending injury, but may have found a gem in Tanner Mangum, a 22-year old freshman who, in consecutive games, has delivered game-winning heaves. He followed his last-second throw to Mitch Mathews against Nebraska with a 35-yard go-ahead touchdown toss to Mitchell Juergens in the final minute against Boise State.

“I don’t know where you go from there,” BYU coach Bronco Mendenhall said of Mangum.

Where BYU goes next is to the Rose Bowl, to face UCLA, which should be practicing its Hail Mary defense during breakfast, lunch and dinner.

The SEC may be down, too. Auburn, Missouri, Arkansas, South Carolina and Tennessee all turned in less-than-stellar performances. Louisiana State edged Mississippi State by two points in a throwback, brutish, Neanderthal game in which the pep rally bonfire was probably started by rubbing two sticks together.

Tennessee blew a 17-point home lead against Oklahoma, which rallied to win in double overtime to provide Bob Stoops with his most important win in a long time.

Feeling some heat after last year’s 8-5 campaign, Stoops called the trip to Tennessee “one of the more special wins” of his career.

Stoops said it reminded him of a 2000 game in which Oklahoma scored 22 fourth-quarter points in a comeback win over Texas A&M.

Stoops must really be sensing something. That was the season Oklahoma finished 13-0 to win the national title.