Going back to school with zombies and Cooties 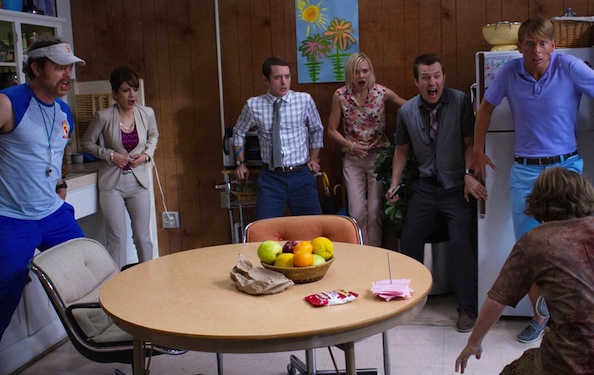 If you’re a kid in school, you probably have a teacher who you wouldn’t mind tearing limb from limb and using their heads as a tetherball. If you’re a teacher, you probably have a few students you wouldn’t mind bashing their heads in with the nearest fire extinguisher. But we all know we can’t and shouldn’t do those things, because hey, we’re good people, right? That’s why we can all thank Cooties, a wholeheartedly silly, yet bizarrely cathartic horror comedy about what happens when the students at an elementary school succumb to a zombie virus.

That premise in itself is simultaneously simple and ingenious. The number of possibilities in a scenario where grade school teachers have to “manage” a zombie outbreak are really quite endless. Then, when you look at who imagined up such a story, it all makes sense; Ian Brennan, creator and writer of “Glee,” and Leigh Whannell, writer of the Saw and Insidious anthologies, teamed up to create this gruesome and unabashedly colorful world where we all get to live out our fantasies of seeing snarky bullies and power-hungry teachers each get what’s coming to them.

And then the good news keeps coming as Brennan and Whannell brought together a ridiculously talented cast to take on the flesh-hungry kids. Elijah Wood (Lord of the Rings) stars as Clint, a wannabe horror novelist who moves back to his small hometown of Fort Chicken to work as a temp at his former elementary school to make some cash. Upon entering the teachers’ lounge, he quickly encounters the wild personalities of Wade (Rainn Wilson, “The Office”), the macho gym teacher; Lucy (Alison Pill, “The Newsroom”), his old grade school crush; as well as a slew of other comedic darlings like Jack McBrayer (“30 Rock”), Nasim Pedrad (“SNL”), and Whannell himself, who honestly steals much of the show as the oddball science teacher with zero knack for human interaction. It’s after a bad case of chicken nuggets is served to the student body, and scratching soon leads to disemboweling vice principles, when Clint and his fellow teachers realize its time for little heads to roll.

All of these chops come together in outrageous form, dishing out a wide variety of comedic styles from slapstick, to physical, to outright goofiness, but all embodying familiar characteristics of teachers we all once knew. Each actor’s strengths are wielded in the writing, allowing each entity to engage with their various modes of comedy. It’s in the moments when they are all stuck in the same tiny basement, where their loud personas crash, mesh, and bounce off of each other where Cooties finds its sweet spot. Brennan and Whannell’s writing finds a way to embed adult humor within the confines of an institution of youth—like Jorge Garcia (“Lost”) taking shrooms and witnessing the whole debacle—creating a hysterical sense of contrast.

There’s also something so satisfying about watching grownups run amok in terror from little blonde girls with pigtails, especially actors like Wilson; however, there are occasions when the silliness becomes excessive, dwindling down the wit to a nub. This is especially the case as the movie comes to a close, conforming to more expected clichés of such a genre blend. However, if anyone out there has been waiting for on-the-money LOTR references, then you can go ahead and get giddy.

In terms of the horror side of the coin, Cooties works hard to play on tropes and conventions of the genre, and flipping them on their head within the world of elementary school. There’s just enough gore, a lot of anxiety as you can hear the little scampering of feet chasing behind you, but in every case, there is always that liberating release of laughter to make you feel like a delighted school kid once again.

Cooties spreads to theaters and VOD on Friday, September 18th.