University of California to revisit its free speech policy 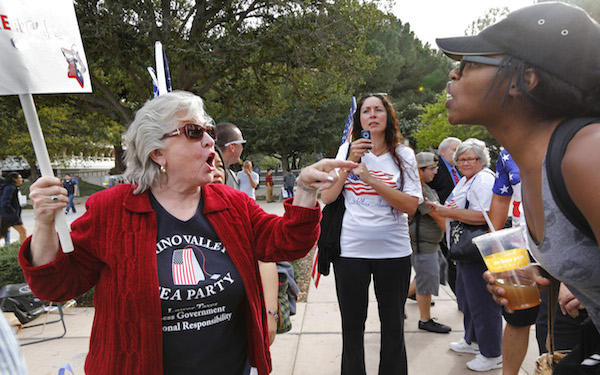 It’s been a half-century since the Free Speech Movement was born on the steps of Sproul Hall at the University of California, Berkeley, inspiring nationwide protests and creating the principle of unfettered expression on campus.

On Thursday, UC regents debated a modern-day sequel: how to allow for free speech while protecting students against prejudice.

A proposed new policy against intolerance was criticized by some regents and Jewish groups as too weak in dealing with what they contend are rising numbers of anti-Semitic incidents on campuses. Others complained that it went too far and would stifle dissent.

The UC regents on Thursday withdrew the controversial policy statement and launched a new effort to rewrite it over the next few months.

The task ahead for UC will be closely watched nationally, experts said. Increasingly multicultural universities want to be seen as a welcoming place for all students — even as the Internet and social media make it easier for students to disseminate offensive and racist views.

In addition, the movement by some student groups to push for the divestment of universities’ financial holdings from companies that do business with the Israeli military has heightened tensions on some campuses.

Some Jewish groups urged the regents Thursday to adopt the U.S. State Department definition of anti-Semitism that includes demonization of Israel and denial of that nation’s right to exist. Those groups later said they were pleased the regents are returning to the drawing board, even if the university ultimately does not use that definition in revising the statement.

First Amendment experts said they worried that the regents might wind up repressing political debate over the Israeli-Palestinian conflict and other hot issues.

Many universities, particularly those that are public, want to encourage “uninhibited and robust debate on issues students care about” but also feel pressure from students, faculty, alumni and politicians to “focus on the impact of unregulated, unfiltered expressions of free speech on fellow students,” said Peter Scheer, executive director of the First Amendment Coalition, which is devoted to free speech.

Trying to do both, he said “is a very tough job” and probably impossible if the university goes beyond recommendations of proper behavior and speech into sanctions and punishments, even mild ones.

At a meeting at UC Irvine on Thursday, regents Chairwoman Monica Lozano announced that she would create an eight-person committee — of regents, the student regent, a faculty leader and others — to craft stronger and more specific policies that would protect academic freedom and yet condemn intolerance against any group.
Regent Eddie Island, who often has been an advocate for minority and low-income students, will head that panel. No time frame was set for the completion of its work and officials said it could take many months.

“This is just the beginning,” Lozano said. “More work needs to be done.”

The withdrawn policy statement condemned ethnic, religious and gender bias and sought to “reflect the university’s core values of respect, inclusion, academic freedom and a free and open exchange of ideas.” The goal was to allow for a prompt and effective response to reports of intolerant behavior.

The statement included a “non-exhaustive list” of actions it said “do not reflect the university’s values of inclusion and tolerance.” Among those: vandalism and graffiti with symbols of hate, including swastikas and nooses; questioning a student’s fitness for a leadership role based on race, religion, ethnicity, gender and other factors; and depicting ethnic or racial groups as less ambitious, less talented or more threatening than others.

The current debate arose in part as a result of several troubling incidents this year at UC schools, including the defacing of a Jewish fraternity house at UC Davis with Nazi swastikas in January. In February, several student government leaders at UCLA questioned a student’s eligibility for a campus judicial panel because she is Jewish; those leaders later apologized and the student was unanimously approved for the position.

Regent Norman Pattiz described the statement as “insulting” to the Jewish community for not directly tackling problems of anti-Semitism. Reports of anti-Jewish incidents led to the search for such principles in the first place, he noted.

UC needs “something real” in its policies against all sorts of intolerant behavior and should develop policies and educational programs with the same vigor as it has recently shown in discouraging and investigating sexual assaults, he said.

UC student regent Abraham “Avi” Oved, who is from an Israeli American family, delivered a passionate and personal statement. He recounted how his mother had read about an assault on a Jewish woman in Europe who had prominently worn a Star of David on a necklace and that she had warned him to be careful about wearing his.

Holding up that chain and star at the regents’ conference table, Oved said he did the opposite and began to wear it more openly to show his pride of being “a Jewish Israeli American.”

He urged the regents to adopt policies so that no students feel they have to hide their ethnic, racial, religious or sexual identity.

Regent Richard Blum said he and his wife, Sen. Dianne Feinstein, D-Calif., believe that students who behave in racist, anti-Semitic or other biased ways should face penalties such as suspension or expulsion. If the university does not adopt strong enough rules, he said, Feinstein would publicly criticize UC.

Palestinian students have faced discrimination and harassment when they speak out about Israel’s treatment of Palestinians, according to a statement released by Liz Jackson, an attorney for the Palestine Legal organization. She said she hoped the UC policy would not be used “to silence one side of an important discussion.”

By adding the State Department definition, the university would take a step toward addressing “ugly and threatening” incidents of anti-Semitism on campuses, said Tammi Rossman-Benjamin, a UC Santa Cruz lecturer and director of the AMCHA Initiative, an organization that seeks to combat anti-Semitism at colleges and universities. Adopting that definition “would not violate anyone’s First Amendment rights or shut down free speech,” she said.

Later, she said, “I’m pleased we have a reprieve and they are not going to adopt this milquetoast, meaningless statement.”

In contrast, UC Irvine graduate student Kurt Horner urged the regents not to add that extra definition, saying that he feared it would squelch open debate about the Israeli-Palestinian conflicts.

The State Department incorrectly blurs the distinction between “criticizing a government and condemning a religious group,” he said. He later said he would support stronger language about racism and anti-Semitism in any revised policies as long as the State Department wording is not added.