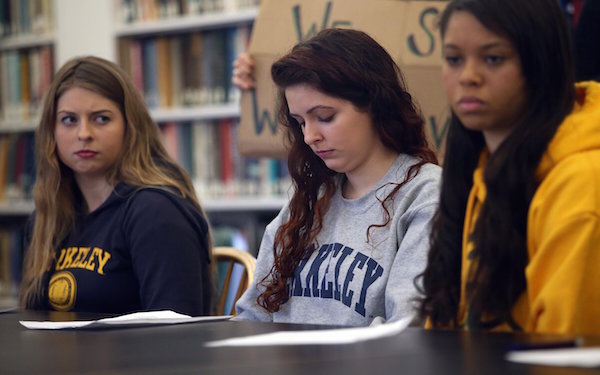 More than one in four female undergraduate students reported they were victimized by nonconsensual sexual contact in a national survey of 27 universities released Monday.

But the survey for the Association of American Universities, one of the most comprehensive ever conducted on college sexual misconduct, found wide variation in the cases depending on campus, gender, age and type of offense.

Among undergraduate females, for instance, between 13 percent and 30 percent had been victimized by the most serious types of misconduct – sexual penetration or touching involving force, threats of force or incapacitation by alcohol or drugs across the campuses surveyed. The risk was highest for freshman women, whose rate was 16.9 percent, compared with 11.1 percent for seniors in 2014-15. But over the course of their college life, 26.1 percent of senior females reported being victimized.

The online survey of 150,000 students also found low rates of reporting sexual misconduct and a mixed response over whether respondents believed their university would conduct a fair investigation. But the vast majority of those who actually reported their cases gave high marks to officials for showing them respect and helping them understand their options.

The survey was aimed at helping campuses address the problem of sexual misconduct, according to Hunter Rawlings, the association's president.

"The leaders of our universities are deeply concerned about the impact of these issues on their students," Rawlings said in a statement. "Their participation in this and other climate surveys is an important part of their efforts to combat sexual assault."

Many universities have moved to improve their response to campus sexual misconduct since the federal government began cracking down in 2011 with a record number of policy directives, fines and more than 100 investigations.

Rawlings said the data can also be used to assist policymakers in crafting additional responses.

Estimates of the problem have varied widely. One frequently cited study of two large public universities found a rate of nearly 20 percent among female college seniors. The University of California's 2014 survey of 104,000 students, faculty and staff members, however, asked its questions differently and found only 6 percent of undergraduates had experienced "unwanted sexual contact."

The university association released only the aggregate results of the survey, which was conducted by the Westat research firm in April. Each of the campus participants, which included USC and Caltech in California, was expected to release its own findings separately. Other participants included Harvard, Yale, Dartmouth, Brown, Cornell, Columbia, Purdue and the University of Arizona.

In a unique design, the survey asked students whether the nonconsensual sexual contact occurred by force, incapacitation, non-physical coercion or the absence of "affirmative consent," an emerging standard that requires both partners to explicitly agree to the encounter. Physical force was the most prevalent tactic and coercion the least.

Overall, 28 percent of female undergraduates reported they were victimized by any of the four tactics. About 23 percent of female undergraduates and 11.7 percent of all students surveyed reported the most serious – physical force and incapacitation – had been used against them. The relatively low response rate of 19.3 percent could have produced a slight upward bias in the results, researchers said.

David Cantor, one of the lead survey investigators and a University of Maryland research professor, said one of the most striking findings was the wide disparity in campus experiences with sexual misconduct.

"This sends a very strong message that each institution faces really unique circumstances and challenges when trying to change campus climates and prevent and respond to sexual assault and misconduct," he said.

The survey also found:
_ Rates of assault were highest among students who identified as transgender, genderqueer (a term the survey uses but does not define), non-conforming, questioning or a category not listed on the survey.
_ Rates of reporting ranged between 5 percent and 28 percent, depending on the behavior. More than half of those surveyed said they did not believe it was serious enough, while others said they were too embarrassed or ashamed, among other reasons.
_ Six of 10 female undergraduates said they had been sexually harassed. Gays and lesbians reported harassment rates of 60.4 percent compared with 45.9 percent of heterosexuals.
_ The rate of nonconsensual sexual contact at private universities was 25.3 percent, compared with 22.8 percent for public universities. But researchers did not find a clear explanation for the disparity in campus results.
_ Most students did nothing while witnessing a drunk person headed for a sexual encounter or cases of sexual violence or harassment.
_ Nearly 9 of 10 students who reported misconduct said the respect shown to them by investigating officials was excellent or good.
_ Only about a quarter of students surveyed said they were very or extremely knowledgeable about where to get help for sexual assault or misconduct.
___
(c)2015 Los Angeles Times
Visit the Los Angeles Times at www.latimes.com
Distributed by Tribune Content Agency, LLC.