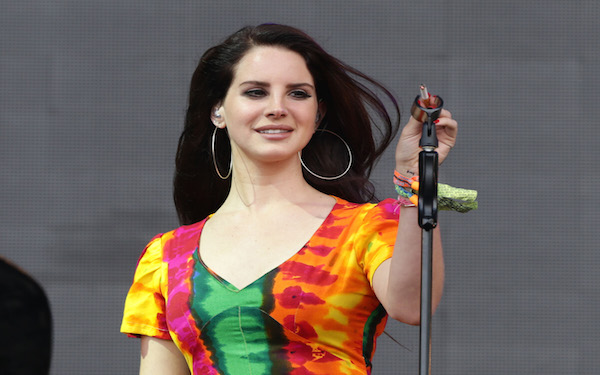 You have to wonder which photograph pushed Lana Del Rey over the edge.

Surely it was just such a shot that led to the music video for "High by the Beach," the lead single from Del Rey's new album, "Honeymoon," in which the 30-year-old singer uses a rocket launcher to take out a photographer crouched inside a helicopter hovering near her beach house.

Understand? She's done with the paparazzi, the natural result of her growing fame over the nearly four years since she released her lightning rod of a major-label debut, "Born to Die."

Yet Del Rey's problem doesn't seem to be their invasion of her privacy, exactly. It was tabloid pictures, after all, that she herself cut together so knowingly in the clip for her breakthrough song, "Video Games."

Her beef is that the guys in helicopters _ not to mention the guys trailing her outside Ralphs or through New York City mass transit _ are taking images of the wrong moments, damaging the glamorous but unknowable persona she's so carefully cultivated.

Basically, they're capturing her as they would an ordinary pop star. And if there's one thing Del Rey makes clear on "Honeymoon," it's that she wants virtually nothing to do with ordinary pop stardom.

From the dirge-like "Video Games" on, Del Rey has shown little interest in whatever's driving the Top 40. "Born to Die" looked back to early-'90s trip-hop, while last year's "Ultraviolence" found her in close collaboration with Dan Auerbach of the Black Keys _ not a pariah but certainly not Dr. Luke.

"Honeymoon," written and produced primarily with Rick Nowels (who got his start in the mid '80s with Belinda Carlisle and Stevie Nicks), is her most pronounced rejection so far, with songs set at such lethargic tempos that many of them don't even bother with beats. Full of strings, horns and keys, the lush arrangements feel more connected to the dabbling Del Rey did last year in high-end movie music (with songs for "Maleficent" and "Big Eyes") than to the danced-up remix of "Summertime Sadness" that yielded her biggest chart hit.

"I'm going deeper and deeper," she sings in "The Blackest Day," and in terms of her aesthetic vision, that's true enough. Compare the title track or "Terrence Loves You" to Taylor Swift's "Wildest Dreams" or Selena Gomez's "Good for You" _ just two of the ultra-breathy pop hits Del Rey has inspired almost in spite of herself _ and she comes across as some infinitely stranger creature, an assured combination of Julee Cruise and Eartha Kitt. Nobody else is doing this.

And it's not just the sound of "Honeymoon," her third full album with Interscope Records, that marks the singer as a proud outsider. Over and over she explicitly describes herself that way, as in "The Blackest Day," where she's "on my own again," and "Freak," in which she invites a fellow misfit to follow her to California.

Her first words on the album go even further: "We both know that it's not fashionable to love me," she sings, luxuriating in each syllable. This is obviously nonsense: Del Rey has never been more in demand among trendsetting mavericks, be it Kanye West, who hired her to sing at his wedding, or the Weeknd, who drafted her for a duet on his new album. But the line gives an indication of how she's absorbed the polarized reaction to her work, which has spawned as many enemies as acolytes.

Not that she's troubled by the hate. Where Del Rey could seem aggrieved in the past, here she's downright placid; there's a calmness to this album (notwithstanding that exploding helicopter) that belies the emotional devastation she's singing about, as though she'd simply elected to rise above it all.

She ends the record with a beautifully spooky rendition of "Don't Let Me Be Misunderstood," a song that two or three years ago _ back when Del Rey was regularly taken for some kind of phony record-label invention _ would've felt like an appeal for objective clarity.

Now it's the opposite: See me the way I want to be seen, the song demands.
Or else.
___
(c)2015 Los Angeles Times
Visit the Los Angeles Times at www.latimes.com
Distributed by Tribune Content Agency, LLC.