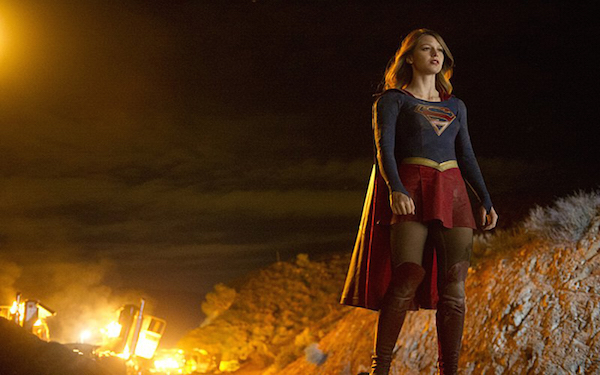 When she changes into her caped costume, Kara Danvers stops being the nerdy, bespectacled coffee-fetcher at a posh media company and emerges as the nearly invincible woman able to, say, fly at supersonic speeds and save a plunging jetliner before it crashes. She is "Supergirl," the main attraction in CBS' new retelling of the DC Comics franchise, and this time she's played by a beautiful former "Glee" costar named Melissa Benoist. The series premieres Oct. 26.

Supergirl is bulletproof, but the real-life 26-year-old who flies around in her blue-and-red tights all day could have used a nap by the time 4 p.m. rolled around the last Monday in August. Benoist had tumbled out of bed at her Studio City home by 5:30 a.m., reported to the Warner Bros. lot in Burbank a half-hour later, then headed straight to makeup before the start of a very long day before the cameras.

She still looked bright and upbeat, if not quite strong enough to hoist an airplane, but then she is an actor and appearing chipper in the middle of a crushing workday was all part of the job.

"I'm so tired," she said during a production break, tipping back on a sofa in the office of Kara's boss, a media magnate played by former "Ally McBeal" star Calista Flockhart, who was not on set that day. There was no red cape in sight: The office scene that was being shot called for Benoist to wear a modest brown sweater and cream-colored skirt with hose and boots.

"I've taken a nap on this couch before. I did today, actually. At first I was into coffee and the sugary things. I thought that would sustain this," she said, gesturing around the busy studio with her hand. She's trying to eat more healthfully now, but some habits are hard to break. She conducted an interview between mouthfuls of an Uncrustables, a hockey-puck-sized sandwich sealed in a plastic bag.

"They're horrible for you, but it's like a to-go peanut butter and jelly," Benoist said.

Benoist may need all the sustenance she can get. CBS is taking a huge roll of the dice with "Supergirl," putting an expensive, effects-laden comic-book fantasy in prime time amid ongoing audience declines for TV, not to mention a glut of superhero tales on screens large and small. Fox's recent movie flop with "Fantastic Four" proves that not even an established hero franchise is a sure thing.

But the comics genre can still pack a crowd when the right project comes along. CBS' sister network the CW has done well with "Arrow" and "The Flash" _ two previous entries from "Supergirl" executive producer Greg Berlanti _ and ABC is headed into the third season of "Marvel's Agents of S.H.I.E.L.D."

The twist for "Supergirl" is that it promises viewers a relatable vision of female empowerment. In plainclothes, young Kara is a typical twentysomething woman, struggling with an entry-level job while trying to master the mating dance (one love interest is photographer James "Jimmy" Olsen, played by Mehcad Brooks of USA's "Necessary Roughness").

But when the bad guys come _ in "Supergirl," they happen to be a race of scary-looking aliens bent on importing mayhem to Earth _ she turns badass savior. No need to counsel this heroine to "lean in."

As CBS Entertainment Chairman Nina Tassler said in an interview: "We're all ready for a female superhero on television."

"Ours is not your dark, brooding superhero show," added "Supergirl" executive producer Ali Adler, who co-wrote the pilot with Berlanti and Andrew Kreisberg. "This is about coming together; this is about looking to the sky and feeling hopeful."

"Supergirl" isn't viewers' first indoctrination into the world of a superheroine, of course.

Lynda Carter starred in "Wonder Woman," which premiered on ABC in 1975 and later ran for additional seasons on CBS. More recently, Halle Berry played Storm in the "X-Men" film franchise and Anne Hathaway played Catwoman in "The Dark Knight Rises." This isn't even Hollywood's first go-round with Supergirl _ Helen Slater played the role in a 1984 feature that drew poor reviews and flopped at the box office.

But the superhero world remains male-dominated. Enough so that the producers believe there is ample room for a new Supergirl to muscle her way in.

Kara Danvers arrives at a time when the media are chockablock with advice for young women looking to advance in a real world where many of the levers of power are still controlled by men. Perhaps the ur-text of that movement is Sheryl Sandberg's 2013 bestseller "Lean In: Women, Work and the Will to Lead," in which the Facebook executive urged career women to stop holding themselves back in their cubicles, to plunge in and take risks. To be, well, more heroic.

That sounds like a job for Supergirl, the DC Comics character created by writer Otto Binder and artist Al Plastino in 1959. The idea was to offer a female version of the ever-popular Superman, who had first appeared in 1938.

Although several different versions of the Supergirl myth were told, the most common has Kara Zor-El as a denizen of the planet Krypton's Argo City who is blasted to Earth to help her crime-fighting cousin Superman.

DC is a unit of Warner Bros., hence the studio controls the rights to the comic characters, including Supergirl. And Berlanti, whose long career encompasses "Dawson's Creek," "Everwood" and "The Mysteries of Laura," has a long-term development deal with Warners, among the very richest deals on the lot.

Adler had worked briefly with Berlanti on a short-lived ABC series called "No Ordinary Family," about a suburban clan who suddenly acquire superpowers. Following his success with "Flash" and "Arrow," he thought "Supergirl" would make the perfect follow-up.

"He came to me and just sort of asked me if that's something I'd like to do, and we connected over it," Adler recalled. (A CBS spokeswoman and a spokesman for Berlanti said he was unavailable to comment for this story.)

One potential problem: The character's name. In 2015, applying any "-girl" suffix to a twentysomething career woman, without irony, sounds not just retro but demeaning to many ears. Adler and the other writers attempted to finesse the issue in the first episode, by having Flockhart's media mogul slap that nickname on the character, and defend it, as a tabloid sales tool. (For the record, there are other DC characters who have used the moniker Superwoman, but none of them has proved nearly as popular as Supergirl.)

Benoist says the naming issue is overblown. "Every woman isn't always a woman. Sometimes she's a girl," she said, as if trying out the sound of that thought. Besides, she added: "I also think it doesn't truly matter, her gender. That's not what you're going to remember Supergirl for. It's more her bravery, her morals and her ideals."

Given the story line _ lots of flying, acrobatic leaps, complicated fight scenes _ the CBS "Supergirl" doesn't scrimp on special effects. In fact, each episode is supposed to shoot for an average of eight days, but the production team has sometimes needed to spend a bit longer to get what the writers want on screen.

Colleen Atwood _ a three-time Oscar-winning costume designer _ was hired to develop an update on Supergirl's iconic red-and-blue tights and cape. The costume includes rubberized ink, applied in thin layers, for an "urban, slightly darker" twist on DC's classic design. "I wanted to portray a certain idealism in the female lead, strong but with some sense of tradition," Atwood wrote in an email.

CBS has been known for years as the oldest-skewing network, but now Benoist is about to become its youngest drama star. And no one seems more surprised by this turn of events than she.

When her representatives first called about the role, Benoist said, "I didn't think I had any chance to play the part ... . It was nothing I ever pictured for myself."

She has since thrown herself into the job. Much of her summer was spent preparing physically: weight training, boxing, plyometrics. Also core work, which helped with the numerous scenes where she has to fly about supported only by stage wires.

There's also a lot of line-memorizing, as she's in virtually every scene.

It can all be a little overwhelming sometimes, even for a superhero.

"It's such a huge world and they are writing such epic stories," she said. "It feels to me like we're making a movie every week and it feels like there's so much to do."

Supergirl may be pretty tired for a while if CBS succeeds in its marketing push.

Brad Adgate, research director at ad firm Horizon Media in New York, said "Supergirl" could prove especially popular with young adults, which is a demographic that the network has often struggled to reach.

"Melissa Benoist could turn out to be one of the top TV stars of a new show this season," Adgate said.
When the cast attended Comic-Con International in July in San Diego, Benoist said, fans who hadn't even seen the pilot chased her through a hotel lobby, grabbing her arm for a photo. Where was Supergirl when you needed her?

"That was kind of a wake-up call," she said of the Comic-Con incident. "Things are going to change for me if this does well."