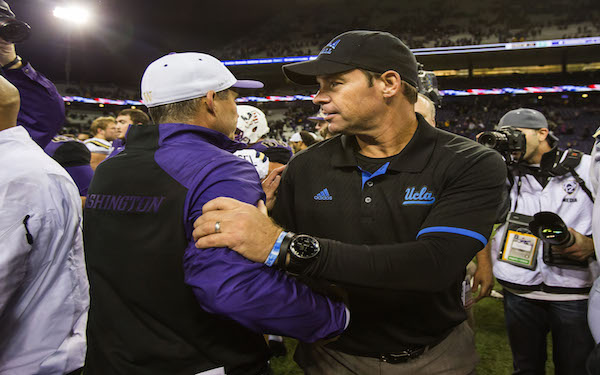 Todd Graham imprinted his philosophy on Arizona State's football program from the moment he arrived on campus.

Graham took over a program that in 2011 led major college football in penalties and, arguably, undisciplined play. A year later, the Sun Devils were the least penalized team in the Pac-12 Conference and had built the foundation for consecutive 10-win seasons.

"We conformed the culture quickly," Graham said this week. "I think now, after three years, it's transformed."

Arizona State will attempt to take another step in its evolution when the Sun Devils host 19th-ranked USC on Saturday night at Sun Devil Stadium in a key South Division game. And USC Coach Steve Sarkisian, who is in his second season with the Trojans, will try to calm a roiling fan base after last week's loss to Stanford.

Graham is one of several Pac-12 coaches who have either reversed the fortunes of their predecessors or maintained the program's winning ways.

In a sport that features such long-tenured coaches as Alabama's Nick Saban, Louisiana State's Les Miles, Georgia's Marc Richt and South Carolina's Steve Spurrier in the Southeastern Conference, Michigan State's Mark Dantonio in the Big Ten and Oklahoma's Bob Stoops and Texas Christian's Gary Patterson in the Big 12, the Pac-12 features a majority of relative newcomers.

Eleven of the Pac-12's coaches started at their schools in 2011 or later. Only Utah's Kyle Whittingham, who took over the Utes in 2005, has been entrenched longer than five years.

But Graham, UCLA's Jim Mora and Arizona's Rich Rodriguez have developed programs that are regularly ranked in the top 25. Oregon's Mark Helfrich, who led the Ducks to the College Football Playoff title game last season, and Stanford's David Shaw have built on the winning foundations laid by Chip Kelly and Jim Harbaugh.

Sarkisian raised Washington's then-winless program to respectability before taking over at USC, which finished 9-4 in his first season and is a shaky 2-1 going into Saturday's game in Tempe, Ariz.

California's Sonny Dykes is off to a 3-0 start in his third season, and Washington State's Mike Leach and Colorado's Mike MacIntyre are 2-1 in their fourth and third seasons, respectively.

Chris Petersen, who succeeded Sarkisian at Washington, is in his second season, Oregon State's Gary Andersen his first.

"Everybody's been different," Sarkisian said. "Everybody's doing it their own way, but they do what they believe in and they're having success."

Mora succeeded Rick Neuheisel at UCLA before the 2012 season. Like several coaches interviewed for this story, he said that instilling a new culture was paramount.

"You just always want to go into a place and create a culture that you believe in," Mora said. "For me, that's a culture of toughness, discipline, accountability. And when I say toughness, I mean mental, physical, emotional tough."

Mora began instilling that mind-set in December of 2011. The former NFL coach was keeping his distance as UCLA went through bowl practice under an interim coach. One day, players went "over the wall," a then-Bruins tradition of ditching practice for one day.

"I hope they had fun going over the wall because it is the last time it is going happen," Mora told reporters. "It might happen again, but you won't see those guys on the field the next day."

The Bruins finished 9-5 in Mora's first season and 10-3 the last two. They are off to a 3-0 start and are ranked ninth heading into Saturday's game at No. 16 Arizona.

The process of maintaining a culture, he said, is ongoing.

"If you feel like you've done it, then you stop," he said. "I feel like we're always on a mission to improve it. But I feel like there is very little resistance from anybody to buy into what we're trying to establish."

Sarkisian was USC's offensive coordinator before he succeeded Tyrone Willingham after the Huskies finished 0-12 in 2008.

In his third game, Sarkisian coached the Huskies to an upset victory over mentor Pete Carroll and the third-ranked Trojans. He compiled a 34-29 record in Seattle before he was hired at USC to replace the fired Lane Kiffin.

"It's a work in progress," Sarkisian said of the Trojans' transition. "We're just getting over the hump here after a year and (some) time into it, but that's the part that's fun. That's the part that kind of excites you every day when you see one guy kind of buy into what you're doing. That's why we do what we do."

Petersen, who annually produced winning teams at Boise State before succeeding Sarkisian, said "getting everybody on the same page" in a short period of time is "really, really hard" because older players are accustomed to different schemes and different ways.

"As a coach, you know there's other ways out there, but you believe in your way," he said.

Petersen estimated an 18-to-24 month process for a full culture change.