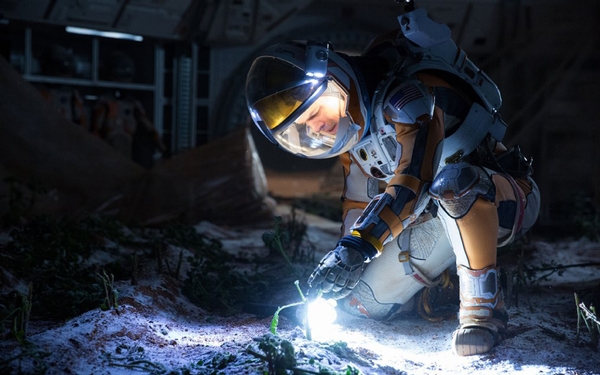 It’s hard to arrange a ride back when you’ve broken down 40 miles from home. When it’s 40 million miles, that’s a challenge.

That’s exactly the predicament faced by Matt Damon’s character in “The Martian.” Ridley Scott’s new film, based on the witty, technically accurate bestseller by Andy Weir, follows a botanist/astronaut left behind for dead by his partners on a NASA Mars mission. Staying on the base with dwindling oxygen, scant food and no communication with Earth, Mark Watney must troubleshoot every challenge like a science superhero.

Talking by phone recently, Damon said he was thrilled to capture another futuristic role fresh off “Elysium,” “The Zero Theorem” and “Interstellar,” which also cast him as a marooned astronaut.

“I love science fiction, and I’d gone over a decade without getting offered a good science fiction movie. And then suddenly I got offered a few of them,” a delightful turn of events, he said, even though it was more coincidence than a career-shaping strategy of his own.

“The Martian” opens with one of those nighttime images of the star-crowded sky that make people think of their cosmic insignificance. But it moves ahead to a story of human triumph. The notion that we are more than helpless specks, and that we can even win a fight in outer space, was part of what drew Damon to the project.

“I loved that it’s a very uplifting movie, a very positive thing to put out in the world,” he said. When he met Weir at the beginning of shooting, the writer called it “a love letter to science.” The movie is the only scientifically straightforward story he has appeared in other than the pandemic thriller “Contagion.”

“That’s probably why it appealed to me on an intuitive level, because it really wasn’t like anything I’d done before,” Damon said.

While he shares screen time with an impressive cast including his “Interstellar” co-star Jessica Chastain, Jeff Daniels, Kristen Wiig, Chiwetel Ejiofor, Donald Glover and Kate Mara, Damon’s isolated character is shown alone in all but a handful of shots. The novelty of putting on a one-man show was also part of the film’s attraction, he said.

“It’s something I thought was going to be a challenge and a little bit risky, as well. But that risk is mitigated when you’re working with a director like Ridley Scott. Once he signed on to do it, it was a very easy decision for me. It didn’t feel like I was on my own because Ridley was never more than 5 feet away.”

Damon said he was also attracted by the shape of the story, one of the few major studio releases in ages that has told an action adventure story without any villains or enemies.

“There aren’t a lot of movies being made like this these days, so hopefully it will attract an audience,” he said. “Hopefully a lot of people will go see it so they continue making movies like this. It shows that there’s a lot of confidence in Ridley to handle a big-budget movie that’s not a superhero movie. Everybody directs slightly differently, but he’s just incredibly unique.”

Scott shoots on four cameras at a time.

“I’ve never really seen anybody do something like that quite as effectively as he does,” Damon said. “He’s got so much experience and he shoots so fast because he’s cutting the film in the camera, essentially. The first day I walked into his tent I saw his four monitors and said, ‘Wow, Ridley, each one of those shots looks just perfect.’ He just glared up at me and said, ‘It’s been perfect for a long time!’ It just really was a joy to work with him.”

While Scott is considered a master of visual effects and editor of the highest order, Damon said he’s equally meticulous about performance. “He’ll print the first take if we get it, but he’ll take 30 if it’s necessary. He won’t move till he’s got what he needs.” While Scott’s recent work as a storyteller in “The Counselor,” “Exodus” and “Prometheus” has drawn criticism, Damon said he loved his latest film’s script “and the project just spoke to him. He’s just really got his teeth into a story he wanted to tell.”

Adapting Weir’s novel, which mixes pulse-pounding drama and laughs, “was one of the challenges. How do we retain all this humor in the book but at the same time keep the stakes as high as possible and ramp up that feeling of danger and dread and terror? As a tonal issue that’s handled entirely by the director, and it just felt like he has a very good grasp of that all along.”

Damon hoped to fit the lead role like a flight suit, appearing high-tech capable without slipping into gung-ho conceit. He tends to draw “everyman roles,” he said, even when he’s maiming villains in Bourne blockbusters. Here again he’s in an adventure that essentially amounts to one long crisis scene, playing a self-effacing character who connects with the ordinary man on the street. And, he said, he was very happy that the film has an international focus as people from all backgrounds team together to rescue Damon’s character.

“The book has that as well, as the whole world kind of gets on board to save Watney. Look, particularly with a presidential election coming up, everyone’s going to try and divide us. It’s nice to put a unity message out for the world.”