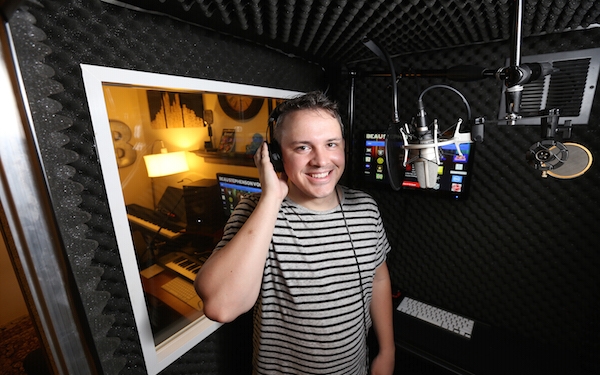 LOS ANGELES — Beau Stephenson gets gigs as a voice-over actor in much the same way people order a car on Uber or find a date on Tinder.

The 27-year-old flips on his computer and logs on to an online marketplace that connects voice actors to clients who need them. Profiles are searchable, have work samples and can pinpoint voice characteristics with adjectives such as believable, real, sweet and saucy.

Gone are the days where voice actors were forced to zoom all over Hollywood for auditions. The digital disruption that’s occurred in other professions is quickly changing the $15 billion voice-over industry, enabling actors to cut out agents and find work on movie trailers, commercials, corporate training videos and audio books.

The first job Stephenson was hired for was a training video for a real estate software company. He was paid $100. But that led to eight commercial spots for Gold’s Gym, narrating a trailer for the video game “Beyond: Two Souls” and projects from 20th Century Fox, Walt Disney Co. and Red Bull.

For decades, the industry hadn’t changed much since Walt Disney became one of the first voice-over actors when he portrayed Mickey Mouse in 1928’s “Steamboat Willie.” Actors ever since have gone through a process of waiting in long audition lines with the hope of being hired to come back into the studio to read a script.

But the industry has evolved right along with technology. For just a few thousand dollars, actors can set up a professional home studio by hooking up a computer with a microphone and mixer. Stephenson was even able to build a recording booth from wooden planks and carpet bought at Home Depot, and hooks the entire system together with high-speed Internet lines.

The ability to create a home studio has put voice-over work within reach of more than just professional actors, opening up the industry to anyone who thinks they can make money off their vocal cords. And it’s led to the proliferation of websites and apps such as Voices.com, Voicebunny.com and Voice123.com that can find actors work.

In the voice-over industry, agencies have traditionally performed this function. But the Web-based model has inherent advantages over the old ways, said David Ciccarelli, chief executive of Voices.com. His company has more than 125,000 actors signed up.

Actors still need agents and a Screen Actors Guild membership for most of the big-paying jobs, such as national network campaigns, feature films, movie trailers and big video game titles. But Voices.com and its competitors still allow nonunion members to audition for these jobs — and actors can join the union if they get the job.

There’s been a boom in nonunion work with the proliferation of digital entertainment such as Web shows and Internet commercials. There’s also nonunion work in local television and radio commercials, corporate training videos, audio books and apps that need narration.

All of that has become a new niche that’s giving thousands of voice-over actors work.

“The pay tends to be lower than that of union work, although the work opportunities are more plentiful,” said Christian Lanz, a voice actor who once was the live announcer of the “Daytime Emmy Awards.” He also pointed out that getting work through an online marketplace can give actors work all over the country, instead of being bound geographically to big markets such as Los Angeles and New York. Adam Levenson, the chief operating officer of audio production house Somatone Interactive Inc., has been using online sites to cast for voices used in video games. The Emeryville, Calif., company works on more than 20 projects a month, much of it producing for big video game makers such as Electronic Arts Inc. and Zynga Inc.

Clients post a job on the website and the voice required for it. Algorithms usually match the job with the most suited talent, who are then invited to audition. Companies can look for talent who suit their job and search for talent by age, gender, language, experience, location or simply using keywords.

Once hired, actors are paid through the website or app with no paperwork needed.

In addition to allowing companies to search on their own, Somatone outsources the task to the online marketplaces. For instance, Voices.com will provide assistance to find top performers, similar to a traditional talent agency sending actors out on auditions. “I just hand over the script to a representative and she finds people from their database,” Levenson said.

These websites are also looking to expand globally. Voicebunny.com offers talent to hire in more than 60 languages and is launching the Japanese version of its website soon, said Jun Loayza, chief growth officer at Bunny Inc., which manages Voicebunny.com and Voice123.com.

Getting jobs doing smaller parts is helping many voice-over actors move on to greener pastures. Actors say the sites are helping them land contracts with Hollywood agents, who won’t take on new clients unless they have a track record.

“Usually, agencies don’t want to work with you unless you have a body of work, but you don’t get work without agents,” said Mike Brang, 36, a former medical imaging specialist turned voice actor. “But voice-casting websites helped me break out of that Catch-22.”
———
©2015 Los Angeles Times
Visit the Los Angeles Times at www.latimes.com
Distributed by Tribune Content Agency, LLC.