Threequels: A Proven Brand, but can They Deliver on Freshness? 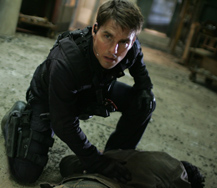 Quick quiz: Which of the following is not a real movie:

B. Shrek the Third

Though each of these titles is enough to make the most hardy moviegoer clutch her popcorn and shriek, “enough, already!,” all but one are the real deal. The first two will open next year; the third went straight to video. The fourth, thank heaven, is currently just an Internet rumor.

But these are just a few titles in the crowded history of the threequel; a sequel to a sequel, as it were. This year is full of them. Some are high-profile: Tom Cruise stars in Mission: Impossible III (opening May 5), with Philip Seymour Hoffman, Keri Russell, Ving Rhames and undoubtedly a number of different forms of transportation. X-Men: The Last Stand (May 26), the third in the X-Men franchise, follows closely behind.

Later this season, watch for The Fast and the Furious: Tokyo Drift (minus, apparently, anyone from the original cast), and for Tim Allen popping up yet again with The Santa Clause 3 in time for the holidays. Though each of these will arrive in town preceded by a massive publicity blitz, all the fuss seems unnecessary. Who doesn't recognize these titles already, and already have an opinion of what their quality might be?

This is, of course, why threequels (and, for that matter, sequels) get made: they are brand names and proven moneymakers. And it's always easier to reheat the leftovers than to cook up a new meal from scratch. Sometimes those leftovers can stretch to a third night, and inexplicably get more popular in the process. The horror film Saw II outgrossed (in every sense of the word) the original Saw – and so we can look forward to Saw III this Halloween.

But with all this microwaving, flavor can get lost. We all know what happened to The Godfather, Part III , Batman Forever , The Matrix: Revolutions , Spy Kids 3 , Terminator 3 ” – just fill in your least favorite threequel here.

The ones that work best tend to be part of an already existing universe, rather than newly dredged-up content: Harry Potter and the Prisoner of Azkaban , The Lord of the Rings: The Return of the King . Some argue that these book-based films aren't sequels at all. I would argue back that the world is full of more amusing things to argue about, such as why the makers of Final Destination 3 don't seem to understand the meaning of the word “final.”

But I've got high hopes for a few upcoming threequels. Though X-Men: The Last Stand brings a new director into the mix (Brett Ratner, whose output has been uneven at best), the terrific original cast should be watchable in any case, particularly Hugh Jackman's mutant dreamboat Wolverine, Famke Janssen's whip-smart Dr. Jean Grey (yes, she's apparently back), and Anna Paquin's lonely Rogue.

Mission: Impossible III , despite Cruise's undeniable overexposure, arrives with decent buzz and a director with pop-culture cred (J.J. Abrams, most recently known for work on TV's “Lost” and “Alias”). Next summer, I'll be first in line to see Sam Raimi's Spider-Man 3 , with new baddie Thomas Haden Church, and am not adverse to seeing Matt Damon and Joan Allen mix it up a little more in The Bourne Ultimatum .

As long as audiences keep buying tickets, threequels and their successors will continue to fill the multiplexes. (Decades from now, watch for Ocean's Thirty-two , in which an entire busload of petty thieves help a mysteriously youthful George Clooney rob a senior center.)