The Berlin hipster break: 8 ways to channel your inner hipster in Berlin 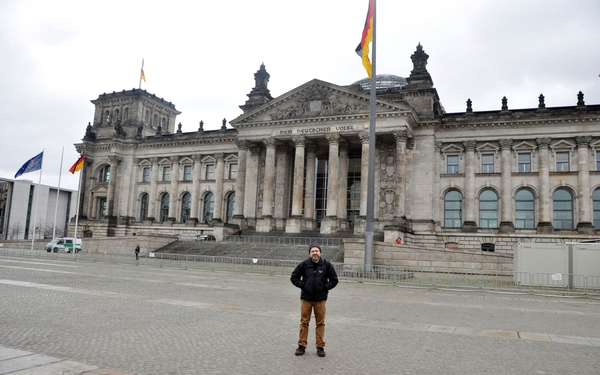 The Reichstag renovation, completed in 1999 by the architect Norman Foster, is exhilarating in Jan 2015 in Berlin.(Donald Munro/Fresno Bee/TNS)

To make the most of a trip to Berlin, we suggest embracing the independence and quirks of one of Europe’s most stylish cities. And, if that means getting in touch with your inner hipster, then so be it. If you want to explore Berlin’s hippest hotels to the best bars in Friedrichshain, pull on your plaid shirts, strut through Görlitzer Park, and — like JFK in 1963 — repeat “Ich bin ein… hipster” as you go. Here are eight ways to channel your inner hipster in Berlin.

Begin by immersing yourself in Kreuzberg with some prime people watching. Once one of Berlin’s poorest areas, this neighborhood is now one of its hippest. When you’re not taking in the crowds, keep your eyes peeled for the great art at the East Side Gallery, the summer open-air performances in Gorlitzer Park and the huge array of vintage shops. Garage is a favorite — it charges by weight rather than item, so any budget will buy you a full hipster uniform!

Oyster Hotel Tip: Stay at Kreuzberg’s Relexa Hotel Stuttgarter Hof. All room rates include an extensive breakfast buffet, and there’s even an in-house tanning bed if the weather outside lets you down.

Make sure your stay includes a Sunday. Why? Well, because Sunday means outdoor Bearpit Karaoke at Mauerpark, which is possibly Berlin’s most unmissable event. Hundreds (if not thousands) of people gather every week at the amphitheater to watch brave volunteers give their best renditions of “Total Eclipse of the Heart”/“Living on a Prayer”/“I Will Always Love You.”

If you want to get about like the locals, then it has to be on two wheels. Exploring Berlin by bike is the best way to see the real city, and fortunately, it’s quite easy. Most sidewalks have cycle lanes, the roads are wide, and most importantly, it’s flat. Take one of the many tours or pedal whimsically from cafe to bar, stopping at will.

Oyster Hotel Tip: The modern Abba Berlin Hotel in Charlottenburg provides its own bike hire service to save you time and effort. Its plush rooms offer big bathrooms, flat-screen TVs, and minibars.

BARGAIN HUNT AT THE FLEA MARKETS

If you like the city so much you decide to stay (or at least extend your stay), then Berlin’s Flea Markets might be the place to look for your new (second-hand) bike. Hipsters like a bargain as much as anyone, and the markets at Boxhagener Platz, Rathaus Schöneberg and Nowkoelln are great for everything from antiques to hand-printed shirts.

Oyster Hotel Tip: Near to both the Nowkoelln flea and the bars and cafes that line the picturesque Landwehr Canal is the 25 Hours Bikini Hotel. The quirky rooms, stylish jungle theme, rooftop cocktail bar, and eco-friendly credentials make this one of the hippest places to stay in Berlin.

Is Berghain the world’s most famous club? We think it just might be, which is why choosing a night and attempting to get beyond its infamously picky bouncers is a must. Show us another club where all photography is banned (not those sorts of clubs). A night in Berghain is a rite of passage in Berlin and since you won’t find any photos, it will have to be seen to be believed.

Oyster Hotel Tip: After a night at Berghain you’ll be in need of some serious downtime. Stay at the elegant Mandala Hotel, where you can detox in the expansive spa and gaze at Berlin’s skyline from the rooftop terrace.

HANG OUT AT THE AIRPORT

Your flight might not leave for another few days but you can still go hang out at the airport; the old Tempelhof Airport that is! Boom-tish! Closed in 2008, the huge public space is the pride of Berliners. It’s used for music festivals, skating, cycling, running and all manner of wholesome activities — but as a hipster you’ll be mainly grilling food and drinking beer in the vast barbecue area.

Why deviate from the world’s favorite hipster food? The city’s burger joints are famously good and after sampling patties from the likes of Burgermesiter, The Bird and the mobile Bunsmobile, you’ll think it was Berlin that was inextricably linked to the hamburger rather than that other German city we can’t remember the name of …

Beer gardens to boat bars, underground jazz clubs to backroom speakeasies, Berlin’s watering holes are some of the finest in Europe. Wander the streets of Friedrichshain, Kreuzberg or Mitte for all the weird and wonderful bars the city has to offer. Alternatively head straight to Prater Biergarten Kastanienallee and drink traditionally oversized steins in Berlin’s oldest beer garden.

Oyster Hotel Tip: And if you’re truly embracing the hipster lifestyle then you’ll want to combine your sleeping and drinking quarters. We would suggest a stay at the super-trendy Michelberger Hotel. Non-guests frequent it for the chic, lively bar but paying guests get the benefit of its budget-friendly modern rooms in the heart of hip Friedrichshain.