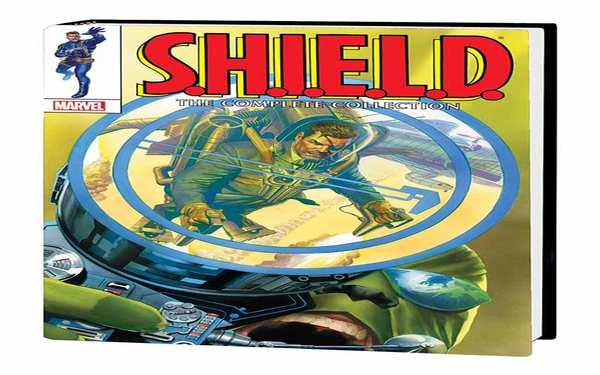 Fifty years ago, Marvel’s Stan Lee and Jack Kirby rode the wave of James Bond mania by taking an old World War II character, wrapping an espionage agency around him, and coming up with their own super-spy, “Nick Fury, Agent of S.H.I.E.L.D.” The acronym stood for Supreme Headquarters International Espionage Law Enforcement Division, and in the first story we saw just how awesome the organization was: Flying cars! Helicarriers! Realistic robots called Life Model Decoys!

That first 12-page story, published in “Strange Tales” #135 in 1965, was titled “The Man for the Job!” The job was director of S.H.I.E.L.D. And the man was Nick Fury, veteran of countless Ranger missions in World War II (as seen in “Sgt. Fury and the Howling Commandos”) and an agent for the CIA after the war (as seen, exactly once, in “Fantastic Four”).

Not that the old, one-eyed warhorse wanted the job. When Tony Stark — yes, that Tony Stark — tried to recruit him, he said “You gotta be kiddin’! You got a million scientific gimmicks — rays — rockets — things I can’t even pronounce! I’m outta my league!”

But Stark and the other leaders of the free world needed someone as tough and experienced as Fury to be the second director of the agency — because the first one had been assassinated! He had been killed by Hydra, a new, evil organization with hazy ties to World War II and a very similar philosophy to the Fascists Sgt. Fury had fought 20 years earlier.

“Hail Hydra! Immortal Hydra! We shall never be destroyed!” they would chant. “Cut off a limb and two more shall take its place! We serve none but the Master, as the world shall soon serve us!”

That was enough for Fury. “Looks like somebody has to smash Hydra,” he said, lighting a trademark stogie. “So it might as well be me!”

That was how S.H.I.E.L.D. began. But over the years, it has gone through many changes — changes that continue today, mostly as the result of the ABC TV show, which began its third season Sept. 29. Here are some of the highlights, available in reprint collections:

The first year and a half of S.H.I.E.L.D. stories — published in “Strange Tales” #135-150 — continued in the bombastic Lee-Kirby style. Not only were all the important elements of S.H.I.E.L.D. introduced, but so were many of the supporting characters (some of them former Howling Commandos) and the major bad guys, which included Hydra and Advanced Idea Mechanics (A.I.M.).

But the next few years were guided by writer/artist Jim Steranko, a visionary whose style blended a variety of sources — including pop art and Salvador Dali — and who impacted not only S.H.I.E.L.D. but comics as a whole.

“I believe that I changed Nick Fury’s life as much as he changed mine,” Steranko said in a solicitation for a collection of his work from IDW Publishing. “And looking over the original art again celebrates a flood of memories evincing the kind of rampant, seismic creativity that went into their creation. I can see my artistic evolution expand by the story, even by the page, and revisiting that experience can be simultaneously reassuring and shocking — a kind of microcosm of comic book history.”

That sounds like hyperbole, but as Fury & Co. continued their battles with Hydra, Baron von Strucker and the Yellow Claw in “Strange Tales” #151-168 and the first few issues of a “Fury” solo title, Steranko got more and more experimental. His run climaxed with a handful of stories still admired today, crossing the super-spy genre with psychedelia and science fiction.

(Warning: These stories have been repurposed in a lot of different collections over the years, so take care when buying S.H.I.E.L.D. collections to avoid duplication.)

— “Marvel Essentials: Godzilla” (1977): Marvel had the franchise for Toho’s most famous monster for a while, and what they did with the Big G was have S.H.I.E.L.D. chase him all over the globe for 24 issues. The series starred Fury’s second in command, Timothy Aloysius Cadwallader “Dum Dum” Dugan (played in the movies by Neal McDonough), and it was a lot of big, dumb fun.

— “Nick Fury vs. S.H.I.E.L.D.” (1988): This story offers a classic espionage trope, in which Fury is framed by his own organization, can trust no one and goes underground to clear his name. Unfortunately, this story also killed off virtually all of Fury’s supporting cast. A later regime at Marvel considered that a mistake and quietly brought most of those characters back, relegating this story to a sort-of “what if.”

— “Secret War” (2005): Fury organizes a group of misfit superheroes to go on a mission expressly forbidden by the U.S. government. That costs him his job, which launches Fury’s third career, as a “ghost in the machine” who watches everyone but can never be found.

— “Secret Warriors” (2009): When the alien shapeshifting Skrulls infiltrate every powerful organization on Earth — including the White House and the Avengers — Nick Fury rides to the rescue with a group of hand-picked agents he knows he can trust. This story introduces Daisy Johnson, the Inhuman with vibration powers, played by Chloe Bennet on TV.

— “S.H.I.E.L.D.: Architects of Forever” (2011): Jonathan Hickman, a writer known for long-form, in-depth stories, posits a S.H.I.E.L.D. that has existed since ancient Egypt, and has included members such as Leonardo da Vinci, Galileo and Isaac Newton. Irresistibly weird.

— “Battle Scars” (2012) and “Original Sin” (2015): In 2002, Marvel introduced a Nick Fury from an alternate universe who was not only black, but looked exactly like Samuel L. Jackson. Once that character became internationally famous in the movies, these stories moved swiftly to retire the white Fury and replace him with a black one … named Nick Fury Jr. Seriously.

— S.H.I.E.L.D. Vol. 1: Perfect Bullets” (2015): This is the first collection of the current “S.H.I.E.L.D.” series which, as you can imagine, looks an awful lot like the TV show. Written by superstar Mark Waid, it stars Phil Coulson, Agent May, Skye and the rest of the gang, plus a lot of guest stars from the Marvel Universe, an advantage the TV show doesn’t have.

— “S.H.I.E.L.D. 50th Anniversary” (2015): This book won’t be out until January, as it collects five issues that came out each Wednesday in September. Those books starred Agent Carter, Agent May, Quake, Mockingbird and both Furys (white and black), bridging the comics and TV versions where necessary.

Special Features
Digital theater is all the rage, but could it destroy the live stage?
175 views

Special Features
Intimate portraits piece together the puzzle of Natalie Wood, the person and mother
331 views

Special Features
Now’s the perfect time to dive into musicals. Here are our critic’s top 7 to watch
229 views

Special Features
Oscars 2020: Who will win and who should win
852 views

Special Features
Secret screenings. Redacted scripts. How they make the twists in ‘This Is Us’
350 views