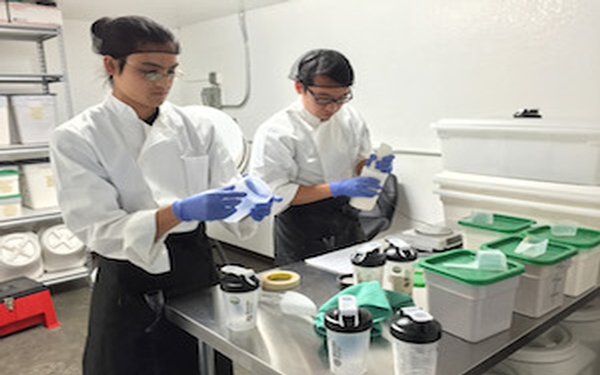 SAN FRANCISCO — The third floor of the American Industrial Center in San Francisco’s Dogpatch district is food central. It houses confectioners, cupcake bakers, pastry makers and catering companies. Everyone is making or packaging food. Even the two youngish guys who look more like chemists than chefs are, technically, making food. A new kind of food.

Tucked away in the humidity-controlled, air-conditioned nook of the building, Alex Cho Snyder, 27, and Richard Sim, 26 — both gloved, goggled, in hairnets and face masks — are hacking the human diet. They spend their days measuring and experimenting with various flours and powders, mixing pancake batter-like drinks that promise to deliver complete nutrition.

Neither are food scientists, though. They don’t have backgrounds in health or nutrition. They don’t even consider themselves chefs.

Cho Snyder is a trained software engineer. Sim used to be a technical recruiter. Both are co-owners of Super Body Fuel, a company getting in on something that food scientists have worked on for decades: improving what and how we eat.

Inspired by Rosa Labs, the Los Angeles startup that kicked off the most recent wave of diet hacking through its liquid meal Soylent (Yes, like the movie. No, it’s not made of “people.”), Cho Snyder and Sim have developed a range of powder mixes that can be shaken up with water or milk to provide a complete, nourishing meal.

Unlike SlimFast and other liquid meal replacements that are sold as weight loss or weight gain supplements, Super Body Fuel’s Schmilk and Athlete Fuel are for day-to-day consumption — quicker than cooking, cheaper than eating out, packing a bigger nutritional punch than a club sandwich.

If it all sounds a bit scientifically unsound, that’s because the jury is out on whether these hacked diets are healthful and safe in the long run. You can reverse-engineer food all you want, some nutritionists say, but humans were engineered to eat whole foods, chewing and all.

“If food is premixed and blended, we skip some of that (digestive) process,” said Neal Malik, an assistant professor of natural health arts and science at Bastyr University, California. “Just because it is in liquid form doesn’t make it more bioavailable.”

Another problem: Many hacked food products don’t undergo the same regulations as the food we find in supermarkets, and products such as Soylent and Schmilk are so new that little, if any, research has been done to prove their efficacy.

“You can’t always be sure what you’re getting,” Malik said.

Diet hackers beg to differ, though.

Sharing their recipes publicly on Web forums and sites such as Reddit, they argue that their meals are about as transparent as you get. In fact, it was Rosa Labs’ initial sharing of the Soylent recipe that spawned a movement of people ordering their own flours and powders from Amazon and mixing home-brewed versions of the beige-colored drink.

Cho Snyder was among the first to “hack” the Soylent recipe, making modifications to it by reducing the amount of carbs and upping the fiber. He conducted his food science experiments in his kitchen, whipping up batches of homemade Soylent for himself and posting his modified recipes online.

Like Rob Rhinehart, 27, who created the original Soylent and is now chief executive of the venture-backed Rosa Labs, Cho Snyder acted as an all-in-one food creator and tester. He made himself a human guinea pig, tweaking the recipe based on how it made him feel.

If anyone had safety concerns, they only had to look to him: As far as he’s aware, he’s still alive and well.

When fellow forum goers asked whether they could buy his version of Soylent from him, he began whipping up batches for them, too.

“Initially I thought this would only last a few months, and these people who wanted to buy from me were just random people on forums, and once the official Soylent came out no one was going to want this random thing I was making,” Cho Snyder said.

But interest didn’t subside, and less than four months after making his first Soylent knockoff sale, Cho Snyder quit his job as a programmer to pursue diet hacking full time.

Over on the East Coast, Ted Tieken started Ketosoy, a company that produces a Soylent-like product for people on the ketogenic (high fat, low carb) diet. In Utah, there’s Keto Chow, another ketogenic Soylent-like product that software engineer Chris Bair makes and sells in his spare time. In Europe, there’s Joylent — a multi-flavored Soylent-like drink. And there are estimates of between hundreds and thousands of individuals taking diet hacking into their own hands, tweaking even the recipes that diet hackers have already tweaked to suit their needs.

“People have an innate desire to improve, change and make things better, and we’ve done it to things around us for a long time,” said Dave Asprey, Silicon Valley entrepreneur, author of the New York Times bestselling “Bulletproof Diet” and self-described “body and diet hacker.”

“Now we’re turning our innate desire inward,” he said.Although Asprey’s Bulletproof Diet, which promotes the consumption of butter in coffee and discourages people from eating certain grains and legumes, is very different from Rosa Labs’ and Super Body Fuel’s liquid meals, it operates on a similar principle: that we’re in charge of our bodies, and we can arm ourselves with widely available information to hack our diets for better results.

And it’s no surprise it’s all happening now, according to Chris Dixon, a general partner at the venture capital firm Andreessen Horowitz, which invested $20 million in Soylent.

The Internet has empowered people to research the science behind food. E-commerce has allowed individuals to turn their kitchen experiments into businesses. And Web forums have become places where people can spread the word about what they’re making and what they’ve learned.

“This is a movement of people wanting to use science and all the research that’s happened over the last many decades in nutrition to create better food products,” Dixon said.

Cho Snyder and Sim have come a long way from kitchen concoctions. Their Super Body Fuel nook in the American Industrial Center is home to sterilized surfaces, expensive digital scales and a “glorified cement mixer” for mixing their flours and powders.

Having figured out the amount of vitamins and minerals that should go into each serving of Schmilk, the two are now refining flavors, adding incremental amounts of stevia and vanilla to little sample cups of flavorless beige liquid.

Standing in the room, gloved and goggled, Cho Snyder adds a small dash of vanilla to a sample cup of Schmilk.

“Hmm, maybe that was too much,” he says, looking at the powder sitting on top of the liquid.

He stirs it up and knocks it back.

“Actually,” he pauses, “maybe it needs a bit more.”