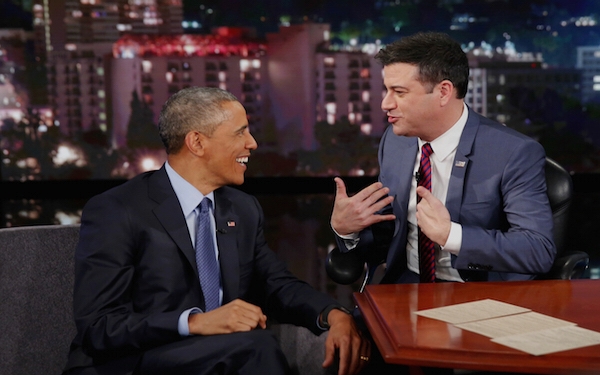 As Pope Francis concluded his first tour of the U.S., another cultural conclave officially convened. Taking over for Jon Stewart on “The Daily Show,” Trevor Noah became the last of the late-night host replacements.

The timing could not have been better. Though many righteously protested the priest-like quality of the group (they’re all male), together they seem to have performed their own sort of miracle.

After years of stagnation, late-night has been unexpectedly redefined and reinvigorated. On the broadcast networks, the disparate talents of Jimmy Fallon and Stephen Colbert, Jimmy Kimmel and James Corden stock the time slot with equal parts silliness, share-ability and social significance.

On cable, Larry Wilmore and now Noah gamely shake off passive nostalgia for their predecessors, Colbert and Stewart, while HBO’s John Oliver defies the quick-hit culture by giving new life, and meaning, to the term “long form.”

And why not? The reign of Johnny Carson, trail-blazer and tyrant, is long over; to the most coveted demographics, “Heeeerrrreeee’s Johnny” is more likely to evoke Jack Nicholson in “The Shining” than the Great Carnac.

The hosts may jockey here and there for A-listers, but technology has rendered the fight for same-night ratings secondary, and even if they do appear to be sharing a guest list, it doesn’t really matter because the shows are so tonally diverse.

Yes, it’s still a bunch of men in suits talking at you, but now there’s a man in a suit for every mood.

Anglophiles can go for the cherubic and theatrically antic (Corden) or the deeply dimpled and politically rant-ic (Oliver.)

For a while, Wilmore was the only nonwhite male (which is to say black) club member, about which he is consistently dry and direct; he recently convened a panel to discuss Jeb Bush’s suggestion that black voters want “free stuff.” Now he’s joined by Noah, a native South African, who included in his premiere a bit about how black people do not go to Mars.

A rather amazing array from a genre that, like so much of television, seemed two gasps from a flatline just a few years ago. “The Daily Show” and “The Colbert Report” were going strong, but after NBC’s utter fail with the Jay Leno/Conan O’Brien transition and the subsequent pick-a-team bickering, the broadcast network shows seemed to be outliving the patience of the audience (and sometimes the audience itself).

After Fallon became the heir apparent for “The Tonight Show,” it was difficult not to wonder whether he had just won a deluxe stateroom on the Titanic. When CBS announced that Colbert would be taking over for David Letterman, it was even worse — not only would we miss Dave, but what cruel universe would switch out “The Colbert Report” for another celebrity talk fest?

Fortunately, and fittingly, it was Colbert who clinched the argument for the genre’s new relevance.

Dancing nervously out of the box this September, Colbert seemed at first to have embraced the new Fallon-led culture of “nice.” He stuttered his way through interviews with George Clooney and Scarlett Johansson, shining only in “Colbert Report-like” bits about politics.

Then, like the good Catholic he is, he found grace on the third day.

An interview with Vice President Joe Biden about the recent death of his son turned into a powerful discussion between two men who knew much about tragic loss, the impact it can have on family and the importance of faith and service.

Biden became the first recipient of the new “Colbert bump” — talk of him entering the Democratic primary increased — and Colbert began to renovate more than the Ed Sullivan Theater. Tearing down the walls between the cool staginess of late-night and the powerful possibilities of the best kind of television interview, he began taking the art form in a direction that owes less to Letterman and more to David Frost.

Frost also began his career as the host of a satirical news show (the legendary “The Week That Was”) only to become an iconic interviewer who redefined the talk show. In the early ‘70s, guests on “The David Frost Show” could, and did, range from activists debating then-Vice President Spiro Agnew about Kent State and Vietnam to high hilarity with Zsa Zsa Gabor or Corky the Chimpanzee.

Colbert hasn’t yet swung to either end of that spectrum, but in just three weeks he has brought a new intellectualism to a genre known more for its reliance on silly pet tricks.

Not that there’s anything wrong with silly pet tricks. Colbert has instituted a “Hunger Games” parody to “honor” each candidate who drops out of the presidential race, not to mention an enormous furry hat under which he makes new laws.

But rather than trying to compete with the more physical humor and YouTube-friendly humor of Fallon and Corden, Colbert has resurrected an old form. He’s trying to do an actual talk show, in which an eclectic group of people — celebrities, yes, but also candidates and other politicos, activists and entrepreneurs — are engaged in smart, funny, open-ended, informed and occasionally emotional dialogue.

He doesn’t get there every time. The satirist still struggles with his new hosting duties, which can involve swallowing a joke if it will derail the interview or truly fluster a guest, and the ghost of his old show continues to haunt him. Audience members, regrettably, still chant “Stephen” ad nauseam upon his entrance, and at one point booed recent guest Republican Texas Sen. Ted Cruz, forcing Colbert to remind them that “he’s my guest.”

Which may be why he then disappointed so many with his oddly deferential interview with Donald Trump. Indeed, Fallon’s apparently lighthearted skit with the candidate, in which Fallon played Trump’s reflection, was far more pointed than Colbert’s interview.

The number of new players — Chelsea Handler and Samantha Bee debut early next year on two new platforms (Netflix and TBS, respectively) — make late-night comedy a very different sort of game. It’s a microcosm of an industry that, while being wheeled to the grave, sat up like the guy in “Monty Python and the Holy Grail” to say “I’m not dead yet … In fact, I’m feeling much better.”