Insane Clown Posse still bumpin’ after all these years 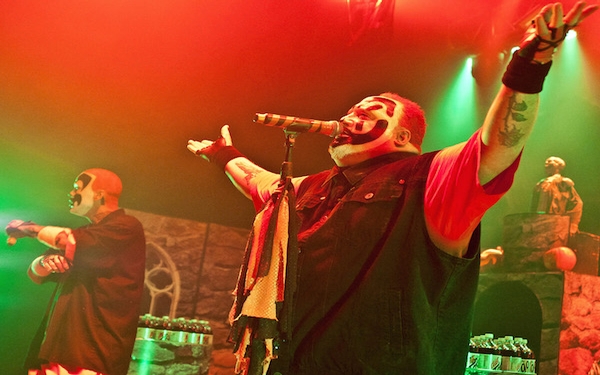 You might think you know Detroit horrorcore duo Insane Clown Posse from the things you’ve read about it, or from the “Miracles” video, a landmark exercise in weirdness, and you’d be partly right: For more than 20 years, Violent J (real name: Joseph Bruce) and Shaggy 2 Dope (real name: Joseph Utsler) have been making slaughterhouse rap with thinly veiled spiritual undertones for their own personal army of fans (real name: Juggalos).

In a phone interview a few days later, a cheery Shaggy 2 Dope talked about the case, the rights of Juggalos and life after “Miracles.”

The following is an edited transcript of that conversation:

Q: Congratulations on the court case. This basically means you live to fight another day, right?

A: Yes, yes it does, yeah. It’s a pretty good feeling that somebody felt it was important enough to keep it going, to hear our side of the story.

Q: You’ve made some of your best music when you’ve had something to rebel against, like record labels, but the FBI — that’s pretty next level.

A: Yeah, that’s not really something that we draw creativity off of. That’s just something that’s just, that’s — I don’t know how to explain it. It’s something so ridiculous that it seems like it’s not even real, that it couldn’t be real, but it is. If anything, it’s a distraction creatively. But we’re going to keep doing what we gotta do to see this thing through, to make sure that Juggalos are redeemed, because this … is just ridiculous, it’s stupid.

Q: Did you ever have any paranoid, “Oh my God, they’re tapping my phone” kind of moments?

A: No, I never did, because even if they were, what are they gonna (hear)? I’m not selling drugs or moving guns. They’d probably get some boring … phone conversations if they were tapping my phone.

Q: When you did another two-part album release, “Shangri-La” and “Hell’s Pit,” you’d said you didn’t want to go back and record the darker one.

A: It was hard. It was really, really, really hard. When we did “Shangri-La,” both of our lives were great at that point, moods were through the roof. Then to have to do a 180-degree switch and go down that road, it was crazy how it worked. All of a sudden, a lot of (stuff) happened in my personal life, and in J’s personal life. It was weird just how once we started recording that record, real (stuff) started happening. Like they say that on the set of “Poltergeist” that little girl was possessed? It kind of felt like that. Nobody died or nothing like that.

A: Just bad things, bad personal things, going through rough times. Especially me with alcoholism, it started getting hard. A lot … started going south quick. We didn’t intentionally make our lives get (messed) up, but I think it came across on the record.

Q: Do you divide your career into before and after “Miracles”? Was that a huge turning point?

A: No, I don’t divide nothing (like that). “Miracles” came out, the video went viral, that put the spotlight on us for a minute, but before that we were all up in that (stuff), just not on YouTube. To me it was funny because now you got actual scientists on YouTube doing a whole essay piece on it. I thought it was funny.

Q: Did you get fans from that who came and went?

A: To be honest, I don’t think so. I think it brought a lot of mainstream attention to us, but I don’t think it was necessarily positive. I don’t think it made any fans. It could’ve, what do I know? It was mostly people analyzing it, taking it as a joke, almost. If it did, cool. If not, who … cares? We already got our fan base anyhow.

Q: When you make an album, do you make it for yourselves? For Juggalos? What’s your mindset?

A: We make it for ourselves, which in turn means we’re making it for Juggalos. We are Juggalos, we are the people that buy our records, that go to our shows. We’re the same people. We’re not gonna make a track about hanging at the club and making it rain on (women), or about Bugattis. We’re background music for Juggalo parties.

Q: One of you said in an interview, “(It’s OK to) act like bad guys on our albums, because we’re pointing people toward religion.” Do you think a lot of Juggalos get that message? Do you think that they care?

A: There are a good amount of Juggalos who get that message. They do more than listen to the surface of the record. We do put a lot of messages on records, but we don’t a hundred percent rely on that. We’re not a KRS-One, claiming to be teachers, “you must learn.” Ninety-five percent of our records are pure entertainment, but if you’re looking for something in there, there’s something in there. … Come on, man, who drives around with dead bodies hanging out their car window? That’d be crazy to think we really did that. That’s entertainment. Then we put that little piece of goodwill and whatnot in there for people who want to hear that because that’s what we believe.

Allison Stewart is a freelance reporter.