Surprise teams might be in college football playoff mix 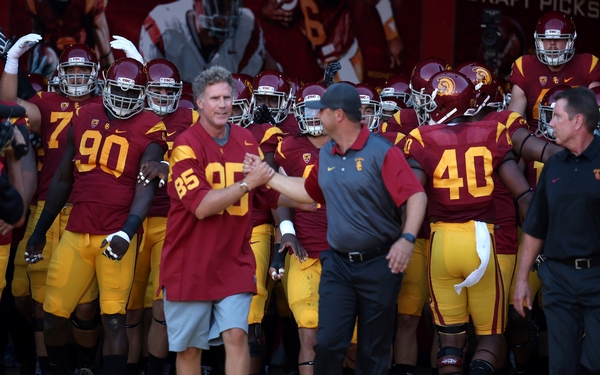 Actor, Will Ferrell, left, and USC coach, Steve Sarkesian lead the Trojans out of the tunnel prior to a game against Stanford at the Los Angeles Coliseum on Saturday, Sept. 19, 2015.
(Credit: Robert Gauthier/Los Angeles Times/TNS)

It was a weekend of wet, wild, wacky fun in college football.

One in which we saw the top teams in the country underwhelm, while others made their case for future playoff consideration.

The 13 members of the College Football Playoff selection committee will release its first rankings — the ones that actually count — on Nov. 3. By then, the college football landscape will most likely resemble the Land of Misfit Toys — with one-loss teams looking for a loving home.

We know the usual suspects: Ohio State, TCU, Michigan State and Baylor, but what about some of the other teams who could find their way into the top four spots by November? Here are some teams to watch:

According to ESPN’s Football Power Index, Utah is projected to win every game except one — at USC on Oct. 24 — making the Utes a strong candidate to represent the Pac-12. An early win over Michigan would also go far as long as the Wolverines continue their strong start.

If Clemson continues to win, Tigers coach Dabo Swinney can Nae Nae his way into the playoff picture. The defense ranks among the top 25 teams in the country and as long as fellow ACC teams do their part to remain contenders heading into November, things could work out well for the Tigers.

The Tigers feature one of the toughest remaining schedules — with showdowns against ranked opponents Florida, Alabama, Ole Miss and Texas A&M — so winning out is a tall task (1.2 percent, according to ESPN’s FPI), but the schedule could help a one-loss LSU team get into the top four.

The Tide need to follow the Ohio State blueprint from last season to find their way back into the playoff discussion. Win out the rest of your games, including ones against ranked foes like LSU and Texas A&M, capture the conference championship and hope higher ranked teams struggle.

Bob Stoops should win coach of the year honors if he can lead Oklahoma into the playoff, especially after the amount of turnover on his coaching staff. The Sooners have shown improvement in all facets of the game and just need to survive a brutal November (TCU, Baylor and Oklahoma State).

Irish fans thought their playoff hopes were washed away in Death Valley, but not so fast. If Notre Dame wins out, including wins over USC and Stanford, the selection committee could take into consideration all of the team’s injuries while evaluating a one-loss team.

Much like Alabama, the Trojans can glean some wisdom from Ohio State and move forward after an early loss. USC’s remaining schedule is tough: Notre Dame, Utah, California and UCLA, but that’s good news for a team looking to make an impression with the selection committee.

We’ve been done this road before after the Aggies started 5-0 last season, only to lose five of their final seven games. But somehow this team seems different. Maybe it’s the addition of defensive coordinator John Chavis, who’s created a Texas A&M defense that leads the SEC with 19 sacks.

There’s no bigger surprise in college football this season than UF. The Gators weren’t expected to be contenders in Jim McElwain’s first season with just 11 returning starters from last season, but that’s what happened. It’s a longshot, but if this team can survive LSU and Georgia — a top-four ranking isn’t out of the question.

The NCAA did violate antitrust laws by limiting financial compensation for athletes, according to a ruling by the 9th U.S. Circuit Court of Appeal Wednesday, but an earlier plan that would force institutions to play athletes as much as $5,000 a year in deferred payments was thrown out. That plan was put forward by U.S. District Court Judge Claudia Wilken during an earlier ruling on Ed O’Bannon’s antitrust lawsuit against the NCAA in August 2014. It was considered proper compensation for institutions using the name, image and likeness of athletes. In a split-decision, the circuit court ruled to vacate part of Wilken’s earlier ruling. The court did agree with the general ruling that the NCAA did violate federal antitrust laws. The decision opened the door for the case to go as far as the U.S. Supreme Court.

The issue of satellite camps stirred up a lot of debate during the summer among coaches and administrators, so it only makes sense the matter will be taken up by the new Division I Football Oversight Committee. The group was created as part of the new autonomy changes in NCAA governance. Bob Bowlsby, the committee chair and commissioner of the Big 12, said a subcommittee has been formed to examine the camps and the group hopes to have a decision on the subject by 2016. The group will also take a close look at various aspects of recruiting, including the number of visits a recruit can make on campus.

ABC’s coverage of Clemson-Notre Dame earned the network a 4.8 overnight rating — the third-highest overnight rating this season — behind Ohio State-Virginia Tech (Sept. 7) and Michigan State-Oregon (Sept. 12). ESPN’s GameDay show earned a 1.6 overnight rating, the highest since Nov. 30, 2013. … How bad have things gotten for Texas and head coach Charlie Strong? The Texas Rangers fired a member of their social media team after someone tweeted “FireCharlie.# bye” during the Longhorn’s 50-7 loss to TCU on Saturday. The tweet was deleted, but the damage was done. The team sent out a news release acknowledging the mistake and the termination of the employee.