20 things to love about the ‘Star Wars’ universe 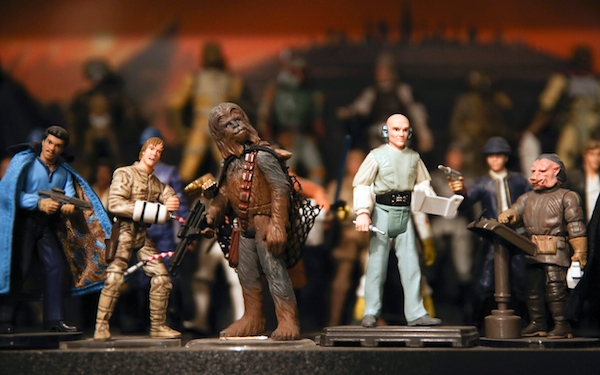 What do we mean when we talk about “Star Wars” now?

Do we still mean the movies? Or do we mean the culture that sprouted up around it almost 40 years ago and refuses to go away? Are we talking about planets and monsters from the imagination of George Lucas?

Or the ancillary empire that sprung from those first blockbusters — bedsheets and video games and TV series and amusement park rides? With “Star Wars: The Force Awakens” opening in December, these questions are about to get even more complicated. The new films, and the films after that — set to arrive annually, until the earth is extinguished by the sun — are post-Lucas enterprises, akin to Disneyland continuing on after Disney. Quite literally: Disney bought Lucasfilm for $4 billion in 2012 and does not plan to put the franchise into carbonite. So it seems we need to recognize that, when we talk about liking “Star Wars” now, we are talking about a massive subculture within pop culture itself.

So, here are what I consider the 20 best things about “Star Wars,” culture-wide.

1. Han Solo: Scoundrel, wise-cracker, audience surrogate. Everything that first captured the audience is contained in the unhurried, borderline uninvested performance of Harrison Ford, who, like the character itself, regards everything going on around him as sometimes silly, sometimes serious, but generally kind of fun.

2. “The Empire Strikes Back”: A franchise gains gravitas, all of the good guys get their butts kicked endlessly and a series that had been as fizzy as a matinee serial turned compelling. “Dr. Zhivago” in space.

3. “Star Wars” bedsheets: Of all the “Star Wars” merchandise in the universe, maybe the most personal. Regardless if you were tucked under a “Phantom Menace” comforter or rested your head on “Return of the Jedi” painterly designs, repeated wallpaper-style across a plush canvas, remain a dream, for your dreams.

4. “Star Wars” parodies: A vein so delightful it is its own genre. Mel Brooks (“Spaceballs”), MAD magazine, “Friends,” “South Park,” “Family Guy,” “Robot Chicken,” even Woody Allen (“Deconstructing Harry”) mined the innate silliness of the material. As Mark Hamill once sang on “The Simpsons”: “Luke be a Jedi tonight.”

5. Darth Vader: Tall, dark and intimidating, the Darth Lord of the Sith, a.k.a. Anakin, reset the bar for villainy. The franchise itself is actually his story. One caveat: Without his helmet, did he have to look like Uncle Fester?

6. Chewbacca’s growl: The indelible work of sound designer Ben Burtt, who recorded bears, badgers, lions, sea lions, camels and walruses, mixing the vocal performance of each animal with an ear for pain, anger or joy.

7. The brass blast of John Williams’ main theme: An invigorating trumpet fanfare that segues into a surge of London Symphony Orchestra strings and, in roughly two seconds, creates a shorthand for the series.

9. Carrie Fisher: The cinnamon-bun hair provides the iconography but the actress herself, on screen and off, with a strong sense of irony, remains a study in how to play a smart, tough woman in a largely male galaxy.

10. The concept paintings of Ralph McQuarrie: Commissioned by Lucas in the mid-’70s to give some flesh to his conceptually questionable script, McQuarrie, a former tech illustrator for Boeing originally from Gary, Ind., gave the universe a shape, and deserves a lot of credit for the design of Darth Vader, C-3PO, etc.

11. “Lego Star Wars: The Complete Saga”: Best “Star Wars” video game ever? Certainly the most sardonic, a Lego re-working of iconic moments that doesn’t insult the puzzle-solving skills of kids or adults, and plays almost like a piece of found art, a radical interpretation of one pop-culture material by another.

13. John Barry’s sets in the original trilogy: From the cool hallways of the Death Star to the cavernous hangars to the griminess of the Millennium Falcon, his vision was a mixture of the cobbled-together and the crassly sleek, telegraphing a sense of social order to the universe.

14. General Grievous: The prequel trilogy was not entirely the creative bust that conventional wisdom assumes. Grievous, a kind of cyborg praying mantis with a touch of Snidely Whiplash, was inspired fun.

15. The packaging design for Kenner’s “Star Wars” toy line: For a handful of years, those simple stark black backgrounds and silver racing lines became so ubiquitous — and remain so, in retro form, in many a toy store — the aesthetic can still be found online as a meme, with a transporting, madeleine-like impact.

17. “Star Wars Rebels” on Disney XD: Arguably the most enjoyable, underrated “Star Wars” series since the original trilogy. It’s feather-light fluff that recaptures the sense of humor, and casual zippiness, of the 1970s.

19. Ewan McGregor’s light saber sounds: While shooting “The Phantom Menace,” the actor was so thrilled to slip into his childhood dreams he habitually made the familiar light saber hum while swinging his prop around on set (sounds that had to be replaced later with the actual sound effect). A fan’s enthusiasm turns meta.

20. Anticipation: Like Christmas morning, the wait for a new “Star Wars” movie — the long, teasing promise of greatness — has become as fun as the gift itself (the most recent trailer for “The Force Awakens” had nearly 72 million views on YouTube, as of Thursday). Will we say the same when there’s a new movie every year?