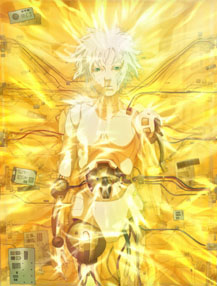 Synonyms for ghost are phantom, spirit, specter. All are terms of ambiguity that are used to describe something you just aren’t sure how to describe. Ghost In The Shell 2: Innocence is equally ambiguous. It’s a simple story with extraordinarily complex philosophical meditations. Simple story: Atou, the cyborg from the original film, 1995’s Ghost In The Shell (Kôkaku Kidôtai), investigates the case of a female robot – one created solely for sexual pleasure – who slaughtered her owner. Complex philosophical mediations: If The Matrix sequel was Philosophy 101, this is post-graduate level study. Pontifications exist in the non-space between humans and machines, the forgetting of what makes one human, the exorcising of the psyche via architecture, and how the ghost of a man – Bateau – can retain his humanity when inhuman acts are committed upon non-humans. Phantasmagoria, however, implies some unequivocal – and innocent – beauty that director Mamoru Oshii (a perfectionistic animator) infuses his machinated world with. The movie is like my histrionic ex – nice to look at, even if you have no idea what she’s talking about.