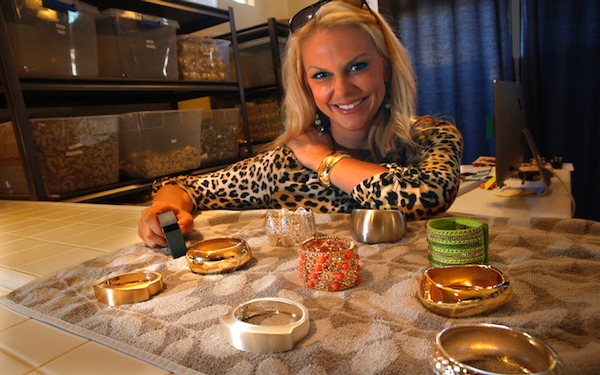 Cynthia Blais, founder and owner of Functional Wearables, poses for a portrait with some of her products on Sept. 29, 2015 at her company in San Diego, Calif.

“From the start, I was impressed with it and got addicted to following my steps and never wanted to take it off,” the 33-year-old said of her Fitbit Flex. “But I’d go out to dates and stuff and be frustrated that it looked so ugly.”

Rather than ditch the wristband, Blais, a lifelong jewelry maker, designed her own hack: She fashioned a beaded bracelet with a hidden compartment to contain the Flex’s tiny removable fitness tracker. Then she made a bunch more and put them for sale on online marketplace Etsy.

“My goal was to sell $750,000 the first year, and I sold over $1 million,” Blais said of her Funktional Wearables fitness tracker jewelry line, which she runs out of her San Diego home.

As activity trackers have soared in popularity, entrepreneurial designers have jumped on the bandwagon. They’re fusing fitness with fashion by making bracelets, pendants and charms that conceal the trackers in more discreet, attractive casings. Device makers, too, are getting in on the trend, partnering with luxury brands to launch their own exclusive lines of jewelry and making the trackers themselves more colorful and attractive.

Consumer tech is at its heart a personal experience, whether it’s the protective case you put on your smartphone or the laptop color you choose. When Tim Cook rolled out the Apple Watch, he spent as much time talking about the device’s stylistic merits as its under-the-hood functions.

Similarly, fitness tracker jewelry, customers say, helps them reflect their individual styles. Wearing a fitness tracker to the gym is one thing, but for work or a party, that techie look just won’t do. And some people prefer not to broadcast their devotion to working out.

With an abundance of options online and in retail stores — there are more than 1,500 results for fitness tracker jewelry on Etsy alone — women can choose among chunky metal bangles, leather cuffs, rhinestone-studded bands and other tracker-concealing accessories.

“There’s no need to wear a naked Fitbit band,” said Pamela Burns, who sells 55 different pieces on Etsy, priced from $12 to $42, to disguise fitness trackers. Sales this year for her StyleForMilesJewelry shop have tripled since 2014.

“I have a lot of options because I love variety and know others do, too,” the designer from Newburyport, Mass., said. “This shop is really a reflection of my taste, my favorite motifs, and what I like to wear. I like classic, meaningful and handmade-funky.”

Some women, such as Erin Mohring, 34, have begun to accumulate collections of fitness tracker jewelry.

“I have a silver one and a gold one, and I have a leather one coming in the mail to me right now,” the blogger and stay-at-home mom from Omaha, Neb., said of the pieces she has bought to hide her Fitbit. “Women are active throughout their days, (but) you want to be fashionable while tracking.”

Fitness trackers and other wearable devices have become big business. In the second quarter, manufacturers shipped 18.1 million wearables globally, up 223 percent from the same quarter a year ago, according to research firm IDC.

Leading the pack was Fitbit, which shipped 4.4 million wearable devices.

Although the company offers a handful of different trackers — some of which can be clipped to a bra, hidden in a pocket or embedded in wristbands — in a growing range of colors, Lindsay Cook, director of product marketing, acknowledged that many Fitbit owners “want to tuck it away and check their stats privately.”

“They don’t always want to advertise their commitment to fitness,” she said.

With that in mind, the San Francisco company last year launched a line of jewelry and accessories for the Fitbit in partnership with designer Tory Burch. The collaboration features colorful silicone printed bracelets and more high-end gold and silver bracelets and pendants from $38 to $195.

On the first day of sales, the line sold out online within a few hours.

Independent jewelry designers say they’re working on new styles, including designs for other trackers such as the Misfit, Jawbone and Samsung Gear.

And guys, too, should be seeing some more options soon.

“My husband helps out here and there, and has modeled for the shop,” Burns said. “A few of my cover bracelets are great for men.”