Steve Jobs is smart, energetic, compelling, just like the man 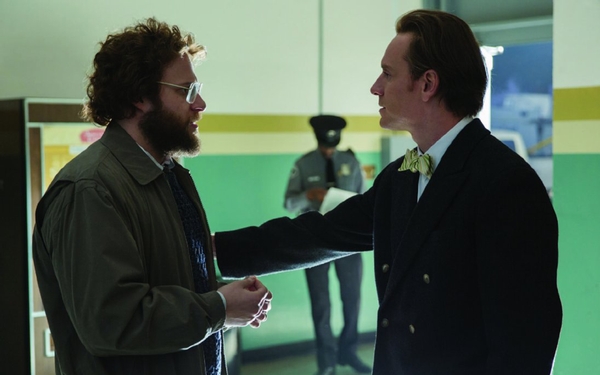 Written by Aaron Sorkin, directed by Danny Boyle, starring Michael Fassbender and Kate Winslet (with expert support from Seth Rogen, Jeff Daniels, Michael Stuhlbarg and Katherine Waterston), “Steve Jobs” is a smart, hugely entertaining film that all but bristles with crackling creative energy. What it is not is a standard biopic.

As anyone who’s seen Alex Gibney’s recent documentary “Steve Jobs: The Man in the Machine” can testify, this dramatic feature is no more an accurate record of the celebrated digital entrepreneur’s life than Shakespeare’s “Macbeth” tells the real story of the 11th century Scottish ruler.

Rather, as the filmmakers acknowledge, this is a dramatization of a life, an impressionistic construct that makes such rich theatrical use of the real building blocks of Jobs’ existence that it convinces us of at least its emotional reality.

The word “theatrical” is used advisedly, because Sorkin not only has written bold, heightened dialogue, but daringly structured “Steve Jobs” as more or less a three-act play, each one focused on the 40 minutes before a trio of Jobs’ product launches: the Macintosh in 1984, the NeXTcube in 1988 and the iMac in 1998.

In each case, the same five key people in Jobs’ life seek him out to verbally spar with this creative force who, for different reasons, is central to all of them. As the man himself, awash in frustration, sums it up, “Five minutes before every launch people get drunk and tell me what’s wrong with me.”

Sorkin’s dialogue is as good as it gets (he wrote “The West Wing” and won an Oscar for “The Social Network”), but putting it on screen in a vigorous, involving way can be a challenge, and no one could be better at meeting that than Boyle.

A director so kinetic he was able to make a film out of “127 Hours,” the story of a man trapped and immobile in a cave for all that time, Boyle is expert at making the potentially static visually interesting.

Boyle and cinematographer Alwin Kuchler envisioned “Steve Jobs” as a film with lots of walking and talking (stalwart Steadicam operator Geoffrey Haley saw considerable action) and even shot each of the three acts in a different visual format: The 1984 launch of the Mac was done on 16-millimeter film, 1988’s NeXT event was shot on 35 millimeter and 1998’s iMac launch was shown via the digital ALEXA system.

Also, understanding how much work it would be to gain command of Sorkin’s language (the actors used words like “rhythm,” “cadence” and “pace” to describe it), Doyle not only shot the story in sequence, he made time for weekslong rehearsal periods before each section was filmed.

Starting “Steve Jobs” off is a remarkable moment set in none of these time periods. It’s a 1974 Australian Broadcasting Corp. interview with Arthur C. Clarke in which the futurist uncannily predicts that there will be small computers in everyone’s home connecting them to the world, a vision that Jobs labored as much as anyone to make real.

Though the film he stars in is very much a group effort, it is hard to imagine “Steve Jobs” without the magnetic Fassbender, who eats parts like this for breakfast, in the starring role.

His Jobs is a man of enormous self-confidence, driven like nobody’s business, whose powers of persuasion are so overpowering his employees talk about the “reality distortion field” he is able to create around himself and his ideas.

The drama begins on the morning of the Mac launch in 1984. Jobs is flat-out furious with key development team member Andy Hertzfeld (Stuhlbarg) because the machine does not want to say hello as it’s supposed to, and Jobs wants it fixed. Now.

“We’re not a pit crew at Daytona,” Hertzfeld protests. When Jobs shoots back, “You’ve had three weeks, the universe was created in a third of that time,” Hertzfeld is given the rare last word: “Someday you’re going to have to tell us how you did it.”

Looking on is Joanna Hoffman (Winslet), Macintosh’s marketing chief and something of a Steve Whisperer, the only person who can speak truth to Jobs on a consistent basis. “Do you want to try being reasonable, just to see what it feels like?” she asks him, adding, “If you keep alienating people for no reason, there won’t be anyone left for it to say hello to.”

The film’s Hoffman, Winslet has said, is something of a composite of several women who were key at Apple, but the actress plays her with a thrilling specificity, as she and Fassbender go head to head like opera stars throwing themselves into legendary duets.

“Steve Jobs,” the man and the film, use Hoffman as a gatekeeper, someone who has a key voice in who gets to see the great man. Those allowed in include Steve Wozniak (Rogen), the Apple co-founder who was the company’s inside man and whom Jobs alternately patronizes and protects. Someone who believes “you can be decent and gifted at the same time,” Wozniak finds, not for the first time, that pushing Jobs to do what he doesn’t want to do is fruitless.

In essence learning the same lesson, albeit in a very different way, is John Sculley (Daniels), whose time as Apple chief executive starts smoothly but soon goes south when, like Wozniak, he pursues an agenda not to the great man’s liking.

Where Jobs is most vulnerable, though you wouldn’t know it at first, is in his dealings with Chrisann Brennan (Waterston), his former long-term girlfriend and the mother of Lisa, the daughter he vociferously denies is his.

As we follow Jobs over these 14 years, his relationship with the computer world and these key individuals morphs and changes in absorbing ways, and none more so than with Lisa, who is played by a trio of actresses (Makenzie Moss, Ripley Sobo, Perla Haney-Jardine) as she ages.

It is in the family arena that Jobs finally proves to be the most vulnerable, though that is a relative term where he is concerned. That underneath all the posturing and bravado, Steve Jobs was human after all is something this shooting star of a movie never lets us forget.