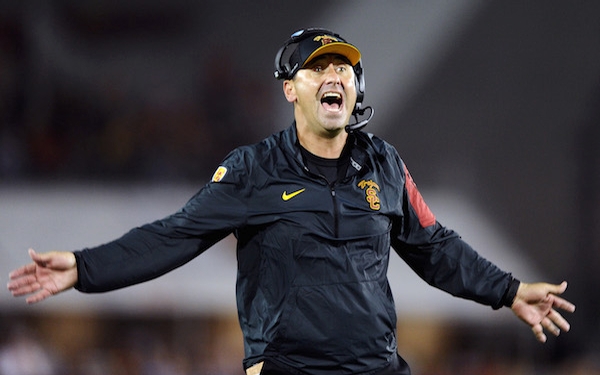 USC head coach Steve Sarkisian yells at a referee in the fourth quarter of a 17-12 loss against Washington at the Los Angeles Coliseum on Thursday, Oct. 8, 2015, in Los Angeles.
(Credit: Wally Skalij/Los Angeles Times)

LOS ANGELES — The first cry for help occurred seven weeks ago, at USC’s “Salute to Troy” banquet, when Steve Sarkisian’s long-rumored alcohol problem surfaced in an ugly incident that brought his onstage appearance to an abrupt end.

USC didn’t listen. How could the Trojans replace a head coach less than a week before the season? Fight on!

The second cry for help occurred four days later at a news conference during which Sarkisian openly acknowledged he might have a drinking problem while shaking, sweating and acting clearly unstable.

USC didn’t listen. In fact, officials immediately trotted their two team leaders in front of the media to defend him. Fight on!

Now, five games into a season during which the USC administration has done nothing but wave pompoms while allowing its student-athletes to be coached into chaos by a man clearly losing a fight with a devastating disease, Steve Sarkisian has finally been heard.

His actions finally screamed louder than a football whistle. He finally pleaded longer than a refrain of “Conquest.” He essentially just dropped to his knees and begged by reportedly showing up “unhealthy” for a Sunday morning meeting and finally he has been heard.

The Trojans announced Sunday afternoon that Sarkisian was taking a leave of absence to seek treatment for an “undisclosed condition.” It was an important move for the coach and a necessary move for USC’s players, although the announcement contained one arguable point.

That “undisclosed condition” has pretty much been known for nearly two months.

Though thankfully it’s not too late to save Sarkisian’s health, it is far too late to save the reputation of the USC athletic department, which, in this instance, valued its image and its results more than the welfare of its students and employees.

Shame on Athletic Director Pat Haden for waiting this long to give Sarkisian help, and shame on USC President Max Nikias for allowing him to wait. Seriously, what were they waiting for? Why was Sarkisian allowed to coach a football game this season without at least taking a leave of absence to be evaluated?

Haden basically dragged an unstable coach from the “Salute to Troy” stage directly to a football field, propped him up, and held his breath, and shame on him for that. And now there are people close to the USC program who say Sarkisian was acting strangely during the Arizona State game. And who knows what other ugly stories are out there involving a sick coach in a program that was too fundamentally weak to help him?

The USC football players, who were promised a top education both on and off the football field, deserve better. The reputation of USC as a university, which had finally grown past the Reggie Bush football scandal, deserves better.

And, yes, as an ill employee, Sarkisian deserved better. The ultimate responsibility lies with him, but it became quickly clear that he was incapable of seeking help on his own.

You heard him in that infamous Tuesday morning news conference after the “Salute to Troy” debacle, didn’t you? He talked sadly like a man who had a problem but no clue how to solve it. And he made it clear that the person who was enabling him was Haden.

I asked him if he had a drinking problem, and he said, “No, I don’t believe so, but through Pat (Haden) and the university, I’m going to find that out.”

Turns out, Haden might not be a great athletic director, but he’s an even worse doctor.

I asked Sarkisian about his next step and he said, “I’m going to go to treatment, I’m going to deal with it. In the meantime I’m going to be the head football coach, and I believe I can be.”

Like that ever works? One of the most high-pressure jobs in sports and rehab at the same time, all while going through a divorce? Like it was a coincidence that this weekend’s behavior occurred after perhaps his most difficult loss as a head coach, a defeat by some of his former players at Washington?

Near the end of his post-“Salute” interview, he suddenly changed his tune and said, “I don’t even know if I need rehab. That’s part of the process, and I credit Pat Haden for this, that he has put things in place for me to have meetings to figure that out.”

The saddest thing about that news conference was the ending, when Trojans players Cody Kessler and Su’a Cravens spoke about making Sarkisian pay for his “Salute to Troy” embarrassment by requiring him to do calisthenics.

Now we know. An abuse problem can be solved with a few up-downs. What great life lessons are being taught to USC students these days.

Sarkisian deserves our prayers, and also probably our farewell. It is difficult to imagine him returning to a place where it all went so wrong. Clay Helton has been named the Trojans’ interim coach for the second time, and maybe he can lead the team on a bit of an Ed Orgeron-type run. But Sunday’s news wasn’t about football coaching or even football.

This is about leadership. It’s time to acknowledge that the Trojans’ athletic department has none. By allowing Sarkisian’s illness to fester for seven weeks in full view of his players, tearing down a man while tearing up a season, Haden was derelict in his duties. His error in judgment in dealing with the fallout from the “Salute to Troy” was as bad as Sarkisian’s error in judgment at the actual event.

Moving forward, it’s difficult to see how Haden can continue to be trusted to run the USC athletic department.