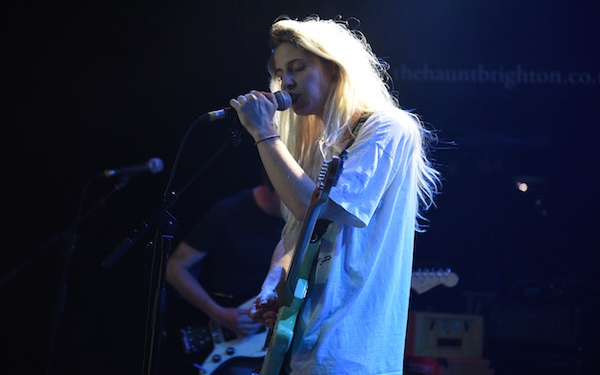 Lead vocalist Alicia Bognanno and the band Bully perform as part of The Great Escape Festival 2015 at The Haunt Brighton on May 15, 2015 in Brighton.
(Credit: Andy Sturmey/UPPA/Zuma Press/TNS)

It’s really just blind luck that “Feels Like,” the debut album from Nashville band Bully, comes around just as ‘90s nostalgia is hitting its peak. “Feels Like” sounds like no other album you’ll hear this year, but it also sounds like an amalgamation of almost every ‘90s band that Bully front woman Alicia Bognanno loves — the Breeders, Hole, the Replacements and the Pixies (technically ‘80s bands, but a great influence on their Clinton-era descendants).

“None of the ‘90s thing is intentional, but a bunch of bands that I really love come out of that era, so it’s gonna creep in there no matter what,” says Bognanno politely (she’s been asked about this a lot). “It’s weird that it happened that way.” What is it about ‘90s rock that resonates with people so much? “I don’t know, because I was born in 1990. But there’s a ton of great bands that came out of that era.”

Bognanno was raised in Minnesota, and with a career as a recording artist still a distant idea, moved to Tennessee to study audio engineering at Middle Tennessee State University. With one semester left she landed a life-changing internship at Electrical Audio, the Chicago studio owned by legendary, and legendarily fearsome, recording engineer Steve Albini. “Everybody was super helpful and really smart and just really nice. I went to the studio because of the tape machines and the gear. I don’t want to say ‘not because of Steve Albini,’ but not because of Steve Albini.”

Bognanno didn’t worry about Albini’s formidable reputation, because she mostly didn’t know about it. And besides, he was nice. “I wasn’t really worried about what kind of rumors had been cast around beforehand. It was an awesome experience … At the time I left I was like, hopefully one day I can be back as an engineer.”

Bognanno, who had already begun to outline the skeletal frame of what would become “Feels Like,” moved back to Tennessee after her internship to finish school and assemble a band. “I started writing more stuff for Bully and putting it all together, and it just kind of took off from there,” she says. “It was quick. It doesn’t feel as quick to me, because I’m so close with it. There was definitely months when I wasn’t sure what was going on (with the band). I remember ending that last tour and not knowing if we were going to tour again.”

Bully has been touring ever since, first in support of its self-titled EP, then “Feels Like,” released in June on the Sony subsidiary Startime International and recorded by Bognanno herself at Electrical Audio. “It was really awesome to be back and almost surreal, because I didn’t really think I would ever have that opportunity. But at the same time, I just really love that studio. I knew that if I would (ever) have that opportunity, that was where I would take it.”

Bognanno tries not to listen to “Feels Like” and hear its every mistake, real or imagined. “I’m a fan of natural mishaps on records. I think it sounds cool, and it brings honesty and a little bit of rawness to the recording process. There’s definitely times when I listen back to the record and I’m like, ‘Ooh, that’s (bad),’ but at the same time, I know that I tried my best.”

“I definitely went through an ‘Exile in Guyville’ phase,” Bognanno says. Bognanno sings about drinking until she vomits, questions her sexuality, and (on the album highlight “Trying”) worries about her period being late. None of this should be a big deal, but it is, still; “Feels Like” feels novel. Bognanno estimates her audience is equally split between men and women, but “if (men) were uncomfortable and didn’t like it, I wouldn’t see it,” she admits. “There were two guys up front singing along to ‘Trying’ last night, and it was awesome.”

In the almost four months since her album’s release, Bognanno has been everywhere; touring, doing interviews, earning praise from peers like Ryan Adams, who called Bully “the best band in the world.” With a follow-up album already on the horizon, she worries more about internal pressures than external ones. “Every day that I don’t write I get stressed out about it, which is really stupid,” Bognanno says. “Sometimes when I take long breaks from writing songs, I get nervous that I’m not gonna be able to do it anymore, which is a really scary feeling, because it’s my creative outlet. If I didn’t have that, I don’t know how I would release all the energy that was inside me. I know it sounds really stupid, but I get paranoid about that.”