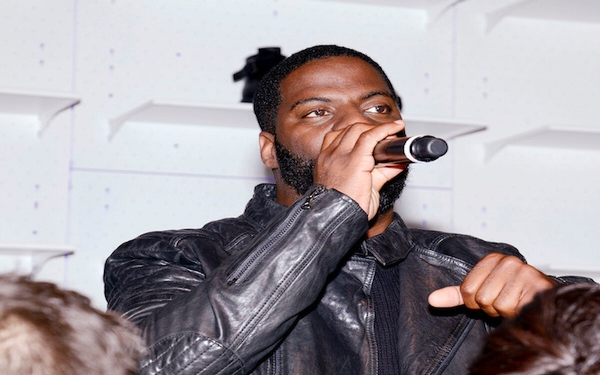 CHICAGO — “My wife and I were looking for a home to purchase, and I rolled past the house that my father grew up in and it was for sale,” says Che Smith, the Grammy-winning hip-hop artist better known as Rhymefest, in the documentary “In My Father’s House.”

Rhymefest and his wife, Donnie, ended up buying that house, a charming red-brick bungalow in the Chatham neighborhood on Chicago’s South Side. But something about being in that home sparks a restlessness in Rhymefest, an unease about his father’s absence in his life. So he decides to seek out and reconnect with his estranged parent, a man named Brian Tillman who has been living on the streets for the past two decades.

Tillman was mostly absent during his son’s childhood; Rhymefest remembers seeing him only three or four times in total and wasn’t even sure if the man was still alive. “He’s living,” confirms an acquaintance, who knows a little of Tillman’s situation. “He’s living homeless. Drinking every day.”

The drinking is no joke. When Rhymefest and his father reunite, they first go to Wallace’s Catfish Corner on West Madison Street. Then comes a request from his father, as they prepare to drop him off at the shelter where he usually sleeps: “Before you take me home, you need to take me to the store.” He means the liquor store.

“I got to get me a sip before I go in,” he says, and when Rhymefest refuses, Tillman lays it on thick: “You hurt me, man,” a moment filled with manipulative tension. And yet, you can’t help but like the guy. He’s smart and affable and easy company. “I actually like the dude,” Rhymefest tells the camera after that first meeting. “Like, I want to go wash my hands and take a shower, but that’s just the (jerk) in me talking. I can’t be mad.”

The movie exposes the ways homelessness can cut a person off from reality, as if he were in a time warp. As Tillman ate his batter-fried fish that night, Rhymefest asks him: “What do you want right now? If you could have anything in the world, what would you want?”

“A nice job and a nice crib,” his father says. “I don’t want to work outside. I want an inside job, running an elevator.” Rhymefest has to inform him: “They don’t do that no more, man.”

“Homelessness is, in many ways, like prison,” Rhymefest said when we talked about the movie. “Homelessness keeps you in a vacuum because your every day is just about surviving: How am I going to eat? Where am I going sleep? These are the main issues, not the things you and I care about, like when is the iPhone 7 going to come out?”

Tillman’s often rocky transformation from his life on the streets to something more stable is only part of the film’s focus. It also exposes much about Rhymefest himself, and his own sometimes flawed relationships with at least one of his children; he is unconvinced he is the little girl’s father until a DNA test proves otherwise.

The film is co-directed by Ricki Stern and Annie Sundberg (whose credits include the 2010 doc “Joan Rivers: A Piece of Work”) but also includes footage shot by Rhymefest and his wife prior to their involvement.

“The Tribune printed an article about me (in 2013) trying to find my father and reconciling,” Rhymefest said, “and when Ricki and Annie from Break Thru Films heard about it, they were like, ‘If you don’t have anything documented already, this would make a better book.’ So I sent them the footage” — including that initial meeting at Wallace’s Catfish Corner — “and they thought it was great and were like, ‘We’ll be there next week.’”

Why reveal such an intimate look at his family? “I’m a rapper,” he said, “and one of the things that I do is document my life and my experiences through audio. Once I decided, with my wife, to move into the house that my father grew up in, it was something that we decided to document on video.”

But when you’re the one writing the lyrics, I said, you’re the one deciding what to lay bare. When two directors come and say, “OK, now we’re going to tell your story through our point of view,” you’re giving up control. A lot of people would be uncomfortable with that.

“It was better, actually,” he told me, “because after that I could just be me, I didn’t need to create the narrative or worry about the direction it should go in as I’m trying to help my father; that would be like laying train tracks as you drive the train.

“And I’ll tell you another thing that was good was to have another cultural lens on it, because it didn’t skew the story where it made me look like the hero. When I view ‘In My Father’s House,’ every time I see it I say, ‘Man, I’ve got things I need to work on.’ You know what I mean? When I was hard on my father in the studio (Tillman accompanies Rhymefest to a recording session and hears his son rap in blunt words about the impact of his father’s absence) and I saw how sad he was because I was just coming down on him, it was like: ‘Yo, I’m a 35-year-old man that’s really a child longing for this man in my life.’ I could understand myself better through someone else’s lens.”

As for Tillman’s feelings about the cameras, Rhymefest said: “When you’re homeless for that many years, being filmed is not something that many of them are comfortable with. They’re trying to stay under the radar. My father, I believe, did it because he wanted to re-establish a connection with me. The first time he saw me, I had cameras with me, so in his mind it was: ‘Oh, my son is famous — there are always going to be cameras around.’”

Rhymefest won his Grammy for co-writing Kanye West’s “Jesus Walks” in 2005 and co-wrote this year’s Oscar-winning best original song “Glory” (from the movie “Selma”), but he has remained in Chicago.

“In many ways, I’ve damaged parts of my career because I chose to stay. I decided to run for alderman (of the 20th Ward in 2011), thinking, ‘Man, I could really help this community,’ but Kanye was like, ‘Stay here (in Los Angeles) with me! Let’s make music. What are you doing?’ Jimmy Kimmel’s a good friend of mine, and it’s like, ‘Come work for the Jimmy Kimmel show!’

“So many people — young people — are like, ‘I’m just trying to make it out of the ‘hood, out of the ghetto, and I wish I had your opportunities so I could make it out.’ My thing is, I need to get the opportunities and bring them back. These people who live on my block, they need to see me come outside every day and know that ‘Rhymefest lives right there next door to me,’ and it gives them hope that they can do what I do.”

What does Tillman think of the finished film? “Oh, he loves the movie. He watches it and says, ‘Was that me? Did I look like that? Oh my gosh!’ He gets a bag of popcorn and settles in,” Rhymefest said. “My father loves movies, so for him to be captured in a film, it’s one of the greatest things that’s ever happened in his life.”

Did you ever hear the words you needed to hear from him, I asked? Did he ever admit, “I messed up and I’m sorry and everything you feel is legitimate and right”?

Ryhmefest: “No. No! (Laughs) But you know what? And this is what I tell people all the time: Stop going to your parents looking for them to wave a wand and make everything right and apologize for everything you’ve ever felt.”