Pat Haden: Steve Sarkisian was fired because he failed to meet USC standards 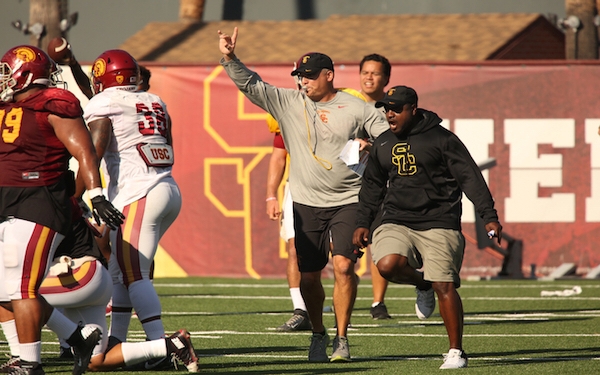 LOS ANGELES — University of Southern California Athletic Director Pat Haden said Tuesday that Steve Sarkisian was fired because his conduct did not meet the university’s standards and expectations of a head coach.

Haden spoke and then answered questions at a news conference at the McKay Center shortly after USC President Max Nikias issued a statement in support of Haden, who has been under fire for his handling of Sarkisian in the aftermath of an embarrassing alcohol-related incident at USC’s annual “Salute to Troy” booster event in August.

Haden hired Sarkisian, a former USC assistant under Pete Carroll, to succeed Lane Kiffin, who Haden fired after a 2013 loss at Arizona State.

Petersen succeeded Sarkisian at Washington and Del Rio was hired by the Oakland Raiders.

Haden said Sarkisian was vetted by a search firm, the NCAA and USC before he was hired.

“The decision I made didn’t work out,” Haden said, “and I own that.”

Haden said he had not spoken to Sarkisian since Sunday, when Haden put him on indefinite leave. Sarkisian had presided over a team meeting but did not show up for practice.

Haden said he had attempted to reach Sarkisian, but had sent him a letter of termination.

Haden said, “I will work very hard to get this right for football.”