USC football program is reeling after firing of Steve Sarkisian

By Gary Klein and David Wharton 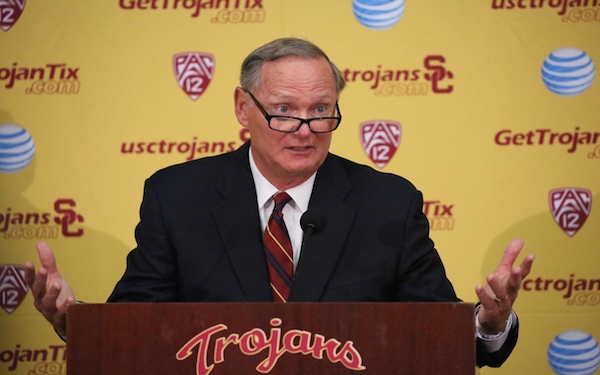 LOS ANGELES — The turmoil surrounding USC’s football team deepened Monday with the firing of Steve Sarkisian, a troubled coach who promised before the season he would seek professional help to determine if he had a drinking problem.

The dismissal came a day after the university placed the Pete Carroll protege on indefinite leave for a string of incidents — he slurred his words and shouted an expletive at a preseason rally, acted strangely during a recent game and, finally, didn’t show up for a practice.

Sarkisian has entered a rehabilitation program, a close friend said.

Now the pressure is on Athletic Director Pat Haden, a former star quarterback at the school who has been criticized for not fully vetting Sarkisian before hiring him two years ago and for not taking more decisive action when the coach’s behavior began to erode.

Haden, whose own job could be in jeopardy, will be searching for a brand-name coach for the university’s signature sports program as rumors swirl about likely candidates.

All of this comes in a week when the Trojans have slipped from the national rankings and must face traditional rival Notre Dame.

A parent expressed disappointment with USC, commenting on the condition she not be identified because her son plays for the Trojans.

“These kids deserve so much better,” she said. “It’s sad for them.”

The terms of Sarkisian’s dismissal were not immediately clear. USC coaches have a morals clause in their contracts, according to a school official who asked to remain anonymous because university policy prohibits disclosing such information.

The decision was posted on the athletic department’s website at about 1:30 p.m. Sarkisian could not be reached for comment. Haden and USC President Max Nikias declined interview requests.

Sarkisian was believed to rank among the highest-paid coaches in the Pac-12 Conference, earning at least $3.4 million a year in total compensation, the amount his predecessor — Lane Kiffin — was making.

Sarkisian acknowledged mixing alcohol with an unspecified medication before the school’s annual “Salute to Troy” gathering of alumni, boosters and parents two weeks before the team’s season opener.

“I knew he was intoxicated, and I wanted to protect him,” Marinovich told HuffPost Live. “And I went to the people in charge and I said, ‘We got to stop this.’ ”

Carroll, the former USC coach who first brought Sarkisian to the program as a young assistant in 2001, said before news of the firing that he believes the 41-year-old now understands the gravity of the situation.

“He’s going to do something about it, so this is the day the turn occurs,” Carroll, now with the NFL’s Seattle Seahawks, told an ESPN radio station. “This is going to take a long time. This is a big battle.”

Though much of the recent media attention has focused on Sarkisian’s behavior at USC, the Los Angeles Times reported earlier Monday about his use of alcohol while he was coach at the University of Washington for five seasons.

Accounts from former players and documents obtained by Times reporters in public records requests portray a man who favored Patron Silver tequila or Coors Light and frequented a handful of Seattle-area bars with staff members.

Expense reports show that during a 2013 football convention in Nashville, Tenn., Sarkisian and three assistants ordered four shots of tequila, four shots of an unspecified liquor and five beers, all before noon.

A former Washington player said the coach had arrived at some morning meetings smelling of alcohol.

Haden has defended choosing Sarkisian to replace Kiffin — another Carroll protege — by pointing out that the coach was never disciplined by Washington while he coached there.

After the “Salute to Troy” incident, Sarkisian held a news conference and blamed his behavior on mixing “not much” alcohol with medication and said he would seek treatment.

“He understands he let us all down,” Haden said at the time. “It isn’t the Steve Sarkisian I’ve known for a long time or certainly the guy I hired.”

In a statement announcing Sarkisian’s firing Monday, Haden said, “Through all of this we remain concerned for Steve and hope that it will give him the opportunity to focus on his personal well-being.”

Watching from the outside, former USC star Ron Yary was worried about the team.

“The worst part about it is, if a coach has a problem like that, the players know it,” he said. “You won’t keep that away from the players.”

Reaction to Monday’s firing was mixed on campus as students sympathized with Sarkisian but also agreed that he should not remain in charge of the team.

For some, it was impossible to separate allegations of drinking from the Trojans’ inconsistent performance.

On Thursday, the team appeared unprepared in an upset loss to Sarkisian’s former school, Washington.

“It’s a very frustrating time to be a USC fan,” said Donald Annarella, a junior majoring in real estate. “It’s a lot of potential and talent out there, and we’re not performing.”

Now, with the team preparing for the big game against Notre Dame on Saturday, the players said they must find a way to regroup.

Many echoed the words of star cornerback Adoree’ Jackson, who said Sarkisian was “a good person, but bad things happen in life you can’t have control over.”

“We just have to keep fighting on,” Jackson said. “I mean, that’s our motto. That’s what we’ve got to do.”