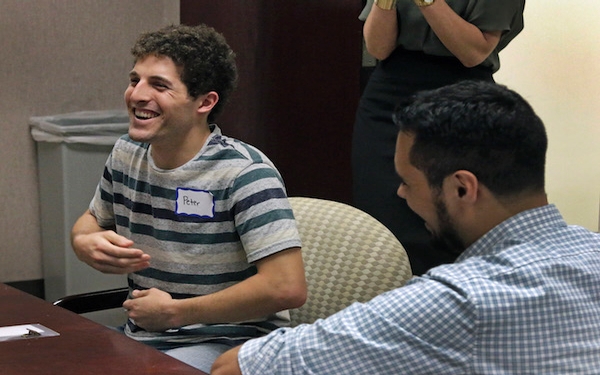 LOS ANGELES — Standing in front of a conference room table on the UCLA campus, Albert Miranda fixes a wide smile on his face and stares at Elina Veytsman, giving her the once-over. Elina fidgets, growing increasingly unnerved.

The students around the table giggle as the tension rises. Then Elizabeth Laugeson steps in.

“What was that like for Elina?” Laugeson asks the class. “Creepy?”

Albert is no creep, and this is no ordinary class. The nine students around the table have a variety of developmental or mental disorders; the majority of them have autism. They’ve enrolled in a 16-week program to help them navigate the treacherous waters of social interaction, and on this Monday night, week 11 of the session, they’re diving into the perils of dating.

Elina, the program’s coordinator, and Albert, a Ph.D. student trainee from the American School of Professional Psychology at Argosy University, then act out a slightly more successful scenario: Albert glances up with a brief smile, and looks away. He does this a few more times. Elina, charmed, returns the eye contact and smiles.

The class spontaneously breaks into applause. Laugeson, an assistant clinical professor at UCLA’s Semel Institute for Neuroscience and Human Behavior, laughs and turns to the whiteboard to go through the dos and don’ts of “flirting with your eyes:” Don’t smile with teeth; don’t stare. Glance up briefly — but repeat the process a few times. She goes around the table, and each of the young adults — four women and five men — practices with either Albert or Elina.

Autism is often thought of as a childhood disease, Laugeson says, and very little research has focused on adults. Resources for young people on the spectrum plummet after they turn 18.

“It’s almost as if we forgot that these kids grow up,” she says.

People with autism often cannot easily read the emotions of others. Tone of voice, facial expression and other verbal and nonverbal cues can be as inaccessible as a foreign language, turning the most ordinary social interactions into minefields.

This, coupled with other symptoms of autism, can have serious ramifications for young adults. Eighty-one percent of autistic people between high school and their early 20s have never lived independently; 68 percent have never lived apart from their parents; 64 percent have had no education after high school; and 42 percent aren’t employed, according to the 2015 National Autism Indicators Report published by Drexel University’s A.J. Drexel Autism Institute.

Those numbers are steep, and they don’t have to be. Laugeson and other researchers say many of the right social skills — for getting a job and keeping it, for making and maintaining friendships, and for dating — can be taught, just as the underlying rules of a foreign language can be broken down and explained.

That’s the goal of the Program for the Education and Enrichment of Relational Skills, or PEERS.

“A lot of people think that social skills in general are innate, that you’re hard-wired in some way and that you either are born with social skills or you’re not,” Laugeson says. “But I think what PEERS has established is that this is actually a set of skills that can be learned, that you don’t have to be born with them.”

Part of that, she says, is practicing different scenarios: how to plan a date; how to offer to pay at the end of dinner; how to politely decline spending the night, without reprimanding the person for asking. And she constantly reminds students to think from another person’s perspective. What does Elina think of Albert right now? How did that make her feel? Would she want to hang out with him again?

“One of the things I like about this class is it helps one be more in tune to other people’s needs and desires,” says Joey Juarez, 25.

Some students in the class are quiet by nature; Joey is not. Thoughtful and bubbly, he’s often the first to cheer on a classmate or offer an encouraging “wow” after someone speaks.

Many people with autism struggle with issues of personal space and physical touch. Not Joey, his parents say. He’s always ready for a hug.

Joey was a quick learner and a chatty toddler. But before he was 3, his parents started to worry that he might have a hearing problem. Soon, he stopped talking altogether.

“He forgot everything. He forgot how to speak. He was a different person,” his mother, Margaret, says.

After several rounds of tests and seeing specialists, Joey and his parents were sent to this same building at UCLA, where he finally received a diagnosis: autism. In all likelihood, they were told, Joey would probably not learn how to speak.

His father, Jose, an engineer, approached Joey’s education methodically. They pushed to keep Joey in regular classrooms, moving from Downey to Whittier, where they found better support for students with autism. Joey started speaking again about age 10, emerging as a hardworking high school student and earning a 4.3 GPA.

But college life proved to have its own challenges. In his fourth year, Joey suddenly found himself losing many friends. It was confusing, and painful.

Joey moved past that difficult period, and he’s now a student in UCLA’s Graduate School of Education and Information Studies hoping to research the challenges that college students with autism face in navigating campus life. And he says the lessons from PEERS are already coming in handy.

“I wish I would have had these skills many years ago,” he says.

Then she asks the big one: Did anyone ask someone they liked on a date?

Most of the class titters nervously, but Breanna cracks up. “Nice one, Peter!”

Laugeson lets them off the hook. “So maybe we’re not all quite ready for that,” she says.

This class seems to bear that adage out. The students are, by any rubric, a diverse lot: black, white and Latino; male and female; some who have finished high school and others who are working on graduate degrees. Some, such as 26-year-old Monica Romero, found out only recently that they were on the spectrum; others, such as Breanna, were diagnosed at a very young age.

Each young adult brings a “social coach,” usually a parent, who spends the session in a separate room. They go over students’ progress for the week, and report back on homework assignments.

Many of the social coaches have discovered that the lessons in PEERS are universal.

“It’s been so helpful, even for people without disabilities,” says Shannon Hahn, a direct support professional who comes to the weekly meetings as one student’s social coach. “When the dating stuff came up, one of the moms was like, ‘How are any of us married?’”

On the final night of the course, the students find their classroom adorned with blue, gold and silver balloons and giant banners. When it’s time for their graduation party, Laugeson leaves the room.

Tentatively, the students put on some music, and then get to talking. Soon, they’re huddling over each other’s cellphones, exchanging numbers.

Laugeson pokes her head in the door.

“Do you know what’s funny?” she says. “You guys were exchanging numbers, and your parents were doing the same thing.”

In the other room, the social coaches are having a little party of their own, passing around sandwiches and swapping stories.

The parents know their job is far from over. Still, there is good news to share.

After a recent social event, Margaret says, Joey and some friends went to a bar.

He even found his own way home using Uber, she adds.

Laugeson gathers the students and coaches together.

“This has been a very special group,” she tells them. “I think you guys feel that; I can see how much you guys have connected with each other.”

Then she gets their certificates, and as each new graduate’s name is called, the students and parents pound the table and cheer.