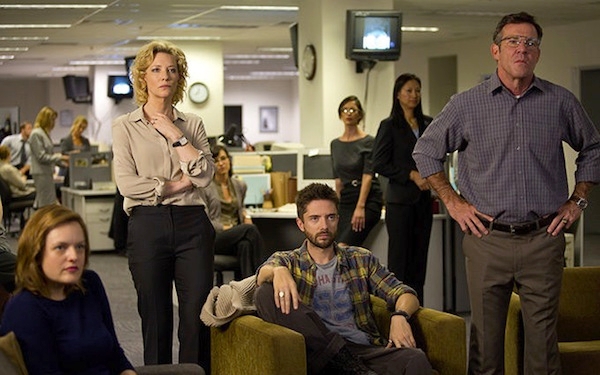 Who do you trust when you turn on the news? The answer is obvious; it’s the people telling you about the latest scandal, the latest political stumble, and the latest winner of a hotdog-eating contest. Sometimes, however, we the current-event consumers need to question what we see and hear. In writer-director James Vanderbilt’s Truth, the impact of media’s power that is often unchecked are put under the microscope, and while the message is integral to our social climate of today, we unfortunately learn little about what to do about it.

Truth, you see, dives into the real-life story of “60 Minutes II” producer Mary Mapes (Cate Blanchett, Blue Jasmine) who, after receiving numerous awards for her relentless investigative reporting, including breaking the story of the abuse of torture at Abu Ghraib, must newly grapple with the messy moral questions of fact versus feeling. Now she has a new case: trying to uncover the truth behind George W. Bush’s (lack of) time in The Air Force. While the major pieces of the puzzle are there, as well as wielding a powerhouse team of reporters and professionals, including her close friend and legendary newscaster Dan Rather (Robert Redford, All is Lost), there are key breaths and pulses to the story that prove to be improvable. So, when shortcuts are made in an attempt to expedite the truth of then-President Bush, Mapes and her colleagues must face backlash from their corporate branches, as well as the conservative blogosphere that quickly shreds apart anything with a flimsy wrist and a liberal backbone.

While he’s a newcomer to the director’s chair, you may recognize Vanderbilt’s name from his various screenwriting credits, including the astonishingly underrated Zodiac (2007), as well as the understandably underrated The Amazing Spiderman films. The scope and success of the two may be seem respectively distant and incomparable, yet, after Truth, we can see how the variability in the two aforementioned films directly informs the hits and misses in his first foray as director.

What’s foremost apparent in the scope of Truth is the caliber of Vanderbilt’s cast, which is to say that it’s high. Very high. From iconic statuses of both Blanchett and Redford, to the more darling natures of Elizabeth Moss (“Mad Men”) and Topher Grace (Interstellar), Truth does not lack in capacity and charisma. That being said, it takes much too long—well into the second act—where we see those chops being utilized.

Much of Vanderbilt’s buildup in his narrative coerced a sense of façade and caricature to his actors, something that shouldn’t come naturally to the likes of Blanchett and Redford. Yet, somehow the new director brought out a facsimile of a reporter, a facsimile of our media culture, and as a result, the tension is lost in the kitsch of the performances. The recently elusive Dennis Quaid (Day After Tomorrow) as the lieutenant consulting on the Bush investigation is the pinnacle of such a parade of caricature. Moss especially seems underutilized, and often seems like she knows this character is more of a sketch of a person than an in depth inquiry. These early moments unfortunately cause disinterest in the important arcs of the story that eventually do come, but unfortunately much too late.

The saving grace of Vanderbilt’s flick is, unsurprisingly, Blanchett. As Mapes slowly succumbs to the backlash of her actions, despite her best intentions, we see a painful disintegration of spirit and confidence that her career was formerly reliant on. Although some of her dark backstory is eagerly expositional in Vanderbilt’s script, we do come to appreciate all that she has overcome and why she so passionately wants to expose the evils of the world and those corrupt powers that normally go by unquestioned and untested. Still, as Blanchett and Redford make for a pretty powerful onscreen duo, that iconic nature of their personas, both character and celebrity, doesn’t seem to live up to the potential we’d expect and ultimately hope for.

For this reason, and rather unfortunately, the heart and message of Truth—that not only the media, but individuals have an innate responsibility and right to interrogate the powers that be in order to reach a state of sublime candor—hits home far too late. We can sympathize and root for this team of underdogs fighting first a government cover-up, and ultimately the right to speak up and out, but there’s simply not enough genuine curiosity of the weight and implications of truth kept in the shadows to warrant the viewers trust.