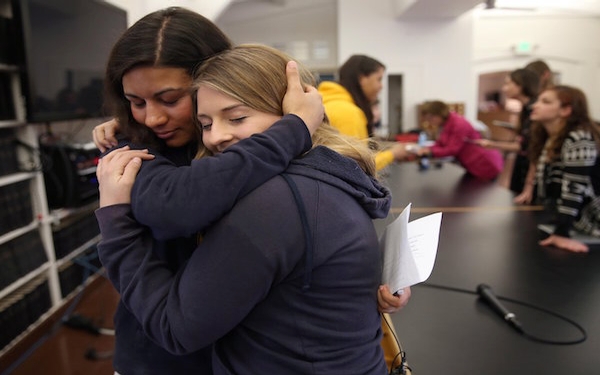 BERKELEY, Calif. — In the world of astronomy, Geoff Marcy was considered otherworldly, like the dozens of planets he discovered in distant solar systems.

But in a flash last week, the white-hot glare of social media revealed the darker side of the University of California, Berkeley professor, a titan in the field who sexually harassed aspiring female scientists. And just as notably, it exposed how many of his colleagues and institutions appeared to know about his behavior — but were either too intimidated or indifferent to stop him.

After years of inaction, it took just five days for an international firestorm to force Marcy to resign from his prestigious posts at UC Berkeley and the $100 million Breakthrough Listen project to study extraterrestrial intelligence.

The question many are asking now is: Is Marcy’s undoing simply a rare example of the stars aligning? Or does his swift departure signal a profound shift in how society reacts and responds to sexual harassment and abuse on campus and in corporate boardrooms?

What’s so extraordinary about Marcy’s case is that once it made headlines “so many people across the board were able to publicly say, ‘I know this guy is in the running to be a Nobel laureate, and I don’t think he should be in our field,’” said Robin Nelson, an assistant professor of anthropology at New York’s Skidmore College and who published a study last year on sexual harassment in academia.

Nelson said she senses a groundswell of changing attitudes over sexual harassment behind the digital expressions of moral outrage over hashtag GeoffMarcy. Ever-greater numbers of women in the workforce, growing activism against campus sexual assault and high-profile exposes of rape and harassment in the military have shined a bright light on similar issues, Nelson said.

Increasingly, the public is fed up — not only with the harassers but with institutions that look the other way.

Two women said in interviews last week with the Oakland Tribune that they tried to report Marcy for similar behavior when he taught at San Francisco State University in the mid-1990s. Both were sickened to see that he was found to have harmed other students at Berkeley — yet allowed to keep his position.

Preet Dalziel, who now lives in Walnut Creek and teaches at a Bay Area high school, said she worked for Marcy as a graduate student; he was also her master’s thesis adviser. At first, Dalziel said, she tried to ignore off-color comments and back rubs he would give to other students. But one day, as they were looking at code on his office computer, she said, he touched her breast.

Dalziel said she went to report what happened to the campus sexual-harassment officer, but was discouraged from filing a formal complaint. Her classmate Lynda Williams told the newspaper she also reported behavior from Marcy that made her and other students uncomfortable, but that she, too, was talked out of pursuing the matter further.

Dalziel had aspired to work at NASA but left the astrophysics field, disillusioned — and convinced she could not get a good reference from the mentor she tried to accuse of harassment.

She said she hopes the outcry over UC Berkeley’s response forces universities to take their students’ complaints more seriously.

“It just kind of hurts me because it’s not right,” she said. “I don’t want professors to feel that they can get away with this stuff because they have tenure or they did something great.”

Marcy, 61, has not responded to repeated requests for comment, including to the allegations made by Dalziel.

Asked about the assertion that students’ claims about Marcy were swept under the rug, San Francisco State spokeswoman Adrianne Bee said the campus had no record of complaints against the faculty member, who was an adjunct professor there until the College of Science and Engineering terminated his appointment on Wednesday.

Like the disgraced comedian Bill Cosby, who enjoyed a pristine reputation before dozens of women slowly came forward to accuse him of drugging and sexually assaulting them, Marcy seemed untouchable.

He and his researchers are credited with 70 of the first 100 discoveries of so-called exoplanets — planets found outside our solar system. In 2005, he shared the $1 million Shaw Prize in Astronomy, describing in his acceptance speech the ultimate goal of the work — to discover life elsewhere in the universe.

At the UC Santa Cruz Department of Astronomy and Astrophysics’ “Evening with the Stars,” celebrating the university’s 50th anniversary in August, Marcy was “the star,” lecturing on behalf of his alma mater at the Lick Observatory. As for the brilliant professor’s darker side?

Yet others, like Harvard astronomy professor John Asher Johnson, who was one of Marcy’s key assistants at Berkeley, revealed on a blog post last week that his “inappropriate actions toward and around women in astronomy is one of the biggest ‘open secrets’ in astrophysics.”

Marcy enjoyed “considerable power” in the field, Johnson wrote. “Underground networks of women pass information about Geoff to junior scientists in an attempt to keep them safe. Sometimes it works. Other times it hasn’t, and cognizant members of the community receive additional emails, phone calls and Facebook messages from new victims.”

Chanda Prescod-Weinstein, a postdoctoral fellow at the Massachusetts Institute of Technology, said when she attended UC Santa Cruz in 2005 she was told as she pursued her career to “stay away” from Marcy. She’s passed the same advice to others.

“It could be that one of the students he chased off would have worked with him on the greatest paper he will now never write,” she said.

But not until Oct. 9, when BuzzFeed News revealed UC Berkeley’s investigation into his behavior in a story titled “Famous Berkeley Astronomer Violated Sexual Harassment Policies Over Many Years,” did the magnitude of Marcy’s other side catch up with him.

Four women accused him between 2001 and 2010 of repeatedly kissing, groping and giving unwanted massages to students, according to a complaint filed with the university.

“While I do not agree with each complaint that was made, it is clear that my behavior was unwelcomed by some women,” Marcy wrote on his faculty page before resigning last week in his only public comments since the scandal broke. “It is difficult to express how painful it is for me to realize that I was a source of distress for any of my women colleagues, however unintentional.”

But revelations that UC Berkeley had earlier let Marcy off with a warning after concluding that he had serially harassed students, led to countless blog posts, news articles and calls for his firing spread at breathtaking speed.

“We are extraordinarily disappointed in our institution for protecting an alleged serial predator who allegedly harassed both undergraduate and graduate students,” read an op-ed in the Daily Californian signed by more than 20 student leaders and alumni.

Suddenly, critics of a powerful figure and an even more powerful institution had their own gathering force and strength in numbers.

Now, many are watching to see if universities will learn from their treatment of Marcy and start to change.

On Wednesday, campus Chancellor Nicholas Dirks wrote in a statement that Marcy’s behavior was “contemptible” and pointed the finger at the university’s faculty discipline system, saying it needed to be re-examined.

The next day, UC President Janet Napolitano convened a joint committee to do just that, writing to the regents: “The recent internal investigation that substantiated charges against a tenured Berkeley faculty member for repeatedly sexually harassing students has highlighted the urgent need to review university policies that may have inadvertently made the investigation and resolution of this case more difficult.”

Williams, a physics professor at Santa Rosa Junior College, said she is dubious how quickly things will change.

“That is the real story here. Not just Marcy,” Williams wrote in an email. “The whole system of complaint and grievance in academia is corrupt because women have to go to administrators whose job it is to make it go away.”

The “current academic hierarchical structure ensures that predators like him have significant safety once they enter the higher ranks,” said Prescod-Weinstein, the MIT postdoctoral fellow. “It is very easy for professors to get away with racist and sexist behavior — and they do — because junior researchers don’t have the power to push back.”

“There is an institutional problem,” he said, that is similar to what his clients faced in trying to force investigations. The women, he said, “aren’t surprised” about how Marcy was treated. “I am not optimistic anything will change.”

“What this story kind of tells us,” she said, “is if you get caught and this catches up with you, your career will end in a week.”