Homeless as a teen, 41-year-old college student leaves addiction behind 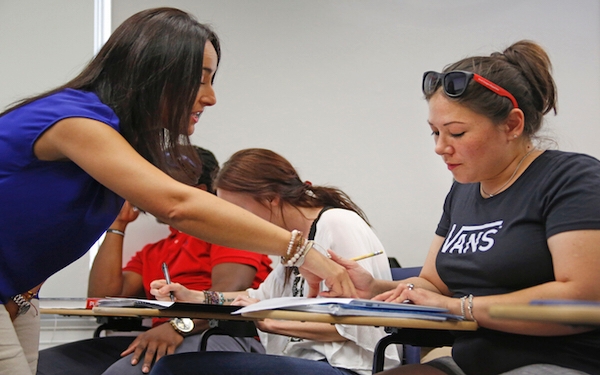 The black-and-red glasses, with the motto “World changers shaped here,” represent a new life for Birdsall, who was homeless at 16 and a repeat felon and drug addict by her late 20s.

“They say that SMU breeds world changers,” Birdsall said. “I don’t know if I’m going to be a world changer, but I’m definitely a game changer.”

Birdsall isn’t ashamed to talk about her past. She believes she’s a stronger, more driven person because of it.

When Birdsall was about 14, she and her two younger sisters moved from Southern California to North Texas with their mother. Their mother and father divorced soon after.

Within two years, Birdsall found herself without a home after her mother kicked her out one night.

A few days later, Birdsall returned to her family’s Hurst apartment to find that her mom and sisters had moved out.

“I think about my kids,” said Sheffield, who’s now 34. “I’ve got a son that’s going to be 12. I cannot imagine, in my wildest dreams, in two years just leaving him.”

Birdsall tried to stay in school, couch-surfing in friends’ living rooms for a while, but eventually dropped out and took a job at a nightclub in Arlington.

In the club scene, Birdsall experimented with drugs — first marijuana, then more intense drugs such as Ecstasy and acid.

She stopped using drugs when she gave birth at age 21, but started again — becoming addicted to crack — after losing custody two years later to the girl’s father.

Birdsall racked up felony arrests for assault, drug possession and car theft, to name a few, and stayed high for days, sometimes passing out in a motel room.

“Hey, are you still alive?” police officers would ask, shaking her.

Birdsall knew she’d hit rock bottom in 2007 when she saw the life she was missing at a McDonald’s not far from the Arlington motel where she was living.

She watched as a family of four parked its minivan and walked into the restaurant: two young girls skipping and smiling, each holding a parent’s hand.

That day, Birdsall told her friend she was done with the drug scene.

“I realized that living the life I was living, I was never going to have anything,” she said. “I was going to end up dead in the street someday or locked up in prison on a life sentence.”

A few weeks later, she enrolled at the Nexus Recovery Center, a substance abuse rehabilitation facility for girls and women.

Like many recovering addicts, Birdsall was optimistic she’d sustain her sobriety after rehab.

But three months later, she relapsed and became a functioning addict, working during the day and getting high at night.

While serving time for shoplifting, she reached another turning point in an unlikely place for a self-professed atheist.

Birdsall was participating in a faith-based program at the Collin County Jail when she was moved to tears. Her fellow inmates huddled around her, praying for her as she sobbed.

She was given five years’ probation. She walked out of the jail a Christian.

“Once you sober up, it’s like somebody takes a bottle of Windex to your eyeballs and wipes them off,” she said. “You start seeing things you don’t normally see.”

Birdsall now needed a cushion between jail and the outside world, a place to practice sobriety. She moved into the Compassion House, a nine-month boarding house program in South Dallas.

Zoe Shepherd, who ran the house with her husband, said Birdsall came in with the social skills of a child in elementary school.

Birdsall got her GED in jail and, while at the halfway house, started working toward an associate’s degree at El Centro College. She surprised herself and her professors with her high grades and youthful gusto.

This summer, Birdsall got a call from an admissions officer at Southern Methodist University: She’d been accepted as a transfer student.

SMU didn’t comment specifically on Birdsall’s case but emailed statements about the admissions process for applicants with a criminal background.

“We know that we all make mistakes, but with time and hard work — sometimes a lot of hard work — we can learn from them,” said Wes Waggoner, the school’s interim associate vice president for enrollment management.

SMU spokesman Kent Best said a special committee reviews any applicants with disciplinary or criminal backgrounds and makes recommendations to the admissions committee.

“SMU looks carefully at the background of any student who has faced trouble in the past to ensure we feel comfortable having them as part of the SMU community — paying particular attention to how the student applicant has overcome past issues,” Best said in a written statement.

A silver cross dangles from her neck, and a charm bracelet she got for completing the Compassion House program in 2011 jingles on her wrist to remind her of her clean date: July 23, 2010.

Her phone is filled with photos of her dad, her sisters and her daughter, who’s going to school in Commerce.

“I’d never dreamed she’d gotten as far as she has — it’s awesome,” said Sheffield, her sister. “I got my sister back, that’s for sure.”

When Birdsall graduates in two years with a degree in applied physiology and sport management, she’ll be the first in her family with a university degree. She wants to become a physical therapist and help wounded athletes and military veterans get back on their feet.

“To be the person where I came from and how far I’ve come,” she said, “sometimes I feel like somebody’s going to pinch me and say, ‘Girl, wake up, you’re dreaming.’”