‘Back to the Future’ is back! How much did it get right? 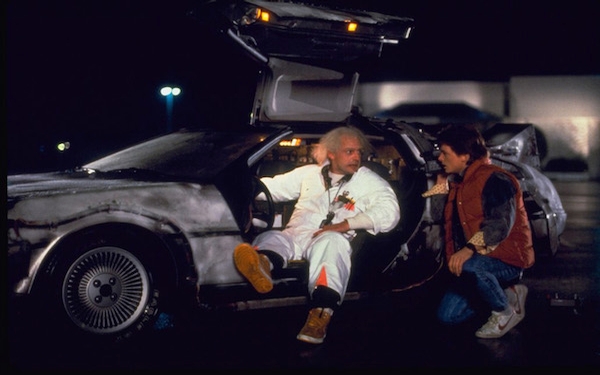 It’s not quite the future imagined.

When “Back to the Future Part II” hit theaters in 1989, it included what the world might look like in 2015.

Among the things it got wrong:

There’s no “Jaws 19.” That series of movies sputtered to an end after four films.

We still have lawyers.

Princess Diana never became queen. The record in the mile run is not 3 minutes. We don’t have a woman president yet.

The movie did anticipate some things — including an easily used digital camera and Vietnam as a surfing attraction — and inspired real-life hoverboards. And the Cubs are still in the hunt for the World Series.

But regardless of its visions, the trilogy of films from 1985, 1989 and 1990 as a whole still appeals to many fans across generations. And not only because we have reached the 30th anniversary of the first film.

While that anniversary was in July, greater celebrations have been set for Wednesday — among them theatrical replays of the movies and other events, new home-viewing offerings and the release of limited-edition Pepsi modeled after the second movie’s drink. There has also been constant speculation that Nike will release a replica of its futuristic shoe in the second film. All that is happening because when the second film leaps into the future, it hits Oct. 21, 2015.

But what is this all about?

The series began with young Marty McFly (Michael J. Fox) going from 1985 to 1955 in a time-traveling DeLorean developed by inventor Doc Brown (Christopher Lloyd). Marty inadvertently stalled the relationship between his future parents and had to fix it to ensure his own existence.

Well, that and give Chuck Berry a musical inspiration.

Marty actually improved his 1985 life by his 1955 deeds. But in the second film, Marty and Doc had to go to the future, 2015, to deal with another family crisis — and Marty again causes havoc, this time for 1985. The third movie — shot back-to-back with the second — sent Marty and Doc to the Old West, and to a resolution of the entire story.

The first film was the biggest hit of 1985. Fox, who had become a TV star thanks to “Family Ties,” showed he could carry a theatrical movie. Director Robert Zemeckis had the first of what would prove to be a string of blockbusters such as “Forrest Gump.”

The first film “was popular because it combined the best of old-school and new-school storytelling,” said film and TV critic Matt Zoller Seitz. “The old-school part was the clockwork plot — literally clockwork, in the end — and the strong, simple characterizations.

“The movie had a sense of craft that was often lacking in 1980s Hollywood films, which could sometimes feel rather slapped-together,” said Seitz, the editor-in-chief of Rogerebert.com, via email. “The new-school part was the special effects, which were innovative both technically and in terms of images — stuff like the flaming tire tracks were as iconic as the way the stars in Star Wars turned into streaks when the Millennium Falcon jumped into hyperspace.”

Seitz saw it for the first time when in high school, and then kept going back that summer.

“I probably saw it six times,” he said. “I didn’t realize who Robert Zemeckis was, even though I had seen some of his other movies. This was the one that made me pay attention to him.”

And it still can have that effect.

“It holds up really well,” said Seitz. “The most fascinating thing about its durability to me is that now, 30 years later, we are as far away from Marty’s time as Marty was from his parents’ time. Back in the ‘80s, we watched this movie and laughed at how primitive the past seemed. Now we laugh at how primitive the ‘80s seem. It’s a double time-capsule now, because it shows us how 1980s Americans viewed the 1950s.”

But what about the second and third film? Neither did as well as the first at the box office, and the second one can feel overcomplicated as it moves around in time and characters overlap with themselves along the timeline.

“The second film doesn’t have the emotional pull of the first one, but as a conceptual feat it’s dazzling, especially when Marty sees Marty in that replay of the finale,” said Seitz. “The third one is quite sweet and has some marvelous Western parody elements, and the final chase is great.”

Some theaters will show all three together on Wednesday, and “it’s kind of fun to watch all three of them close together and see how they comment on each other, and also how they create this sense of history repeating itself, almost as a preemptive joke against complaints that the sequels repeat themselves,” said Seitz. “The same actors play themselves at different ages, or they play their own ancestors or descendants.”

And the moviemakers may have gotten another prediction very right.

“The thing I find most interesting about (the second movie) is the vision of capitalism,” Seitz said. “The mentality of a guy like Biff, who’s in control in the nightmare future, is basically that of Donald Trump or some other belligerent rich man with no conscience, a guy who only cares about power and being told how great he is.

“Without meaning to, the filmmakers really predicted the way rich people’s attitudes about this country would change, or maybe I should say change back, to something like what we had before regulation.”