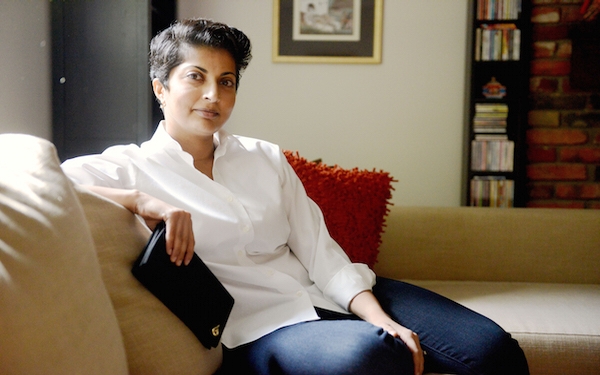 Rohini Shah’s first startup — a line of organic cotton children’s clothing that featured Indian-inspired colors and designs — was barely out of the gate in 2008 when global financial markets crashed.

The business was just getting traction, she said, when consumers stopped spending, retailers faced a liquidity crunch, and many of the independent boutique owners who had enthusiastically placed orders called her in tears to say they could no longer carry the clothes.

She and her partners ended up dissolving the business, but she doesn’t regret the experience.

“I wouldn’t have gotten here and I got to learn because of things that went wrong (in the economy),” said Shah, who launched her second venture, Blu Salt, in 2013.

This time around she’s marketing a line of handbags made from organic and recyclable materials. The bags are targeted primarily to women who want a luxury look combined with durability for daily use and travel.

While the economy is in a better place than seven years ago, Shah is frank about her entrepreneurial challenges. She manages what she calls her “far-flung” team — including a product designer in California, material suppliers and production workers in Asia, and a marketing firm in London — from her home base in Upper St. Clair.

Then there’s financing. To date, she’s self-funded the enterprise because trying to convince the male-dominated venture capital sector to invest in a woman-owned business peddling products for women “doesn’t always resonate.”

According to a study released in May by American Express, the number of women-owned businesses in the U.S. totaled just over 9 million, up 74 percent since 1997.

But while they are increasing in number, the size of women-owned businesses remains smaller than the average firm so their total share of the U.S. workforce is only 6 percent, Amex said.

“Most of these women-owned firms are self-proprietors, not employee-owned. And a sole proprietor can only do so much, so their average revenue is pretty low.”

Obtaining the funding needed to grow their businesses is one factor inhibiting growth, said Harris. “Access to capital continues to challenge women-owned businesses.”

After her first company flopped during the recession, Shah took a position with management consulting firm A.T. Kearney and typically traveled five days a week for work.

That’s when she noticed that women’s handbags and briefcases were crammed with laptops, paper files and personal items but many — even high-priced upscale brands — weren’t strong and flexible enough to sustain all the items.

When she left that job to focus on raising her son, Shah started thinking about bags that would be simple and stylish with a “utility perspective.”

Shah’s commitment to sustainable products goes back to her days at Yale University where she earned her MBA degree and was first introduced to the concept of corporate social responsibility.

Besides sustainable materials, Blu Salt produces its bags and packaging at fair-wage factories in Vietnam and India, and donates part of its proceeds to the Chinmaya Organization for Rural Development, which supports women and youth in India.

“Business is a way for me to fulfill my responsibilities to society,” said the 38-year-old native of Hyderabad, India, who was raised mainly in Singapore. “It makes me sleep better at night.”