Kristen Wiig says the ‘Ghostbusters’ blow back ‘really bummed me out’ 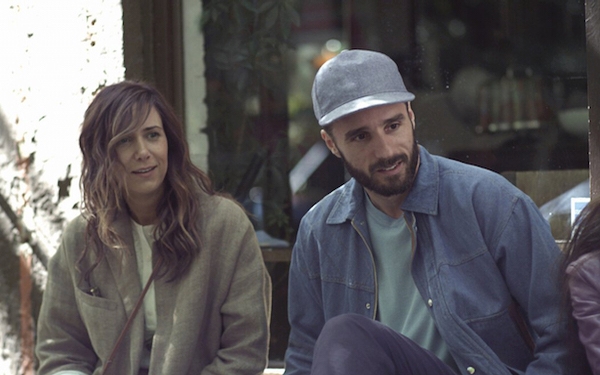 After seven seasons on “Saturday Night Live” and an Oscar nomination for co-writing the breakthrough hit “Bridesmaids,” in which she also starred, Kristen Wiig has become something of an unstoppable force, with an agile versatility able to swerve between outsized hilarity and detailed emotional nuance.

This year she has had starring and supporting roles in studio movies and independent films, comedies, dramas, on TV and streaming services: “The Martian,” “Welcome to Me,” “The Diary of a Teenage Girl,” “A Deadly Adoption,” “The Spoils Before Dying” and the revived “Wet Hot American Summer.” Wiig recently finished shooting the new “Ghostbusters” for director Paul Feig.

In “Nasty Baby,” Wiig plays Polly, a single doctor in Brooklyn who is trying to have a baby via in vitro fertilization with help from her best friends, the gay couple Freddy and Mo (Sebastian Silva and Tunde Adebimpe). Directed by Silva, best known for his road-trip comedy “Crystal Fairy” with Michael Cera, the film is a playful look at modern definitions of friendship and family that takes a boldly dark turn.

Q: In a recent essay in the New York Times, film critic A.O. Scott asked whether you are one of the current “signifiers of snobbery.”

A: Wait, what? What does that mean?

Q: He described “a person who admires Kristen Wiig, but only in her serious roles.”

A: “Only.” So that means you specifically don’t like me in comedic roles? I don’t know what to make of that.

Q: This year you’ve appeared in the major studio release “The Martian” and independent films like “Welcome to Me,” “The Diary of a Teenage Girl” and “Nasty Baby.” In moving between bigger and smaller films, as well as between comedies and dramas, do they seem the same to you? Do you do them for different reasons?

A: Well, they all start with the same base, which is a desire to do the project, which usually comes from the script and/or the director. But mostly the script. It sounds so simple, sort of trivial, but I just get a feeling and if I want to do it, I try to do it.

Q: Does it strike you as unusual when you appear in a movie like “The Martian”?

A: Why wouldn’t I want to do a Ridley Scott movie about someone stranded on Mars starring Matt Damon and Jessica Chastain? Aren’t we supposed to do as many things as possible and wear as many colors as we can? That’s why I like this art form.

Q: With “Nasty Baby” you came to the project on very short notice. You seem pretty busy — why not just take that time off?

A: I wanted to work with Sebastian, and (actress and co-producer) Alia Shawkat told me about it and asked if I would read the treatment, and then I saw “Crystal Fairy” and I was like, “Oh my gosh, I have to work with this person.” Everything about it was so enticing. We shot it in like two weeks, we had no budget, we brought some of our own wardrobe and just kind of ran around Brooklyn with the camera. It was a style of filmmaking and creating that I really loved being part of.

A: I liked that she was this single girl in Brooklyn who wanted to have a child and her two best friends were trying to help her out. You get the feeling it’s been going on for a while. Sebastian wanted to play up her persistence, so some scenes he would say, “I want you to be kind of annoying, like pestering.” And I liked that about her, there is an uptightness about her that I really liked playing.

Q: There’s a great moment where you are talking to the two guys about the difficulty of trying to get pregnant, full of expectation and disappointment, and it’s more emotionally raw than other scenes.

A: Throughout the beginning of the movie there’s this character who wants something really, really badly and I think in that scene you finally see her as a person and that she’s sad. Every time it doesn’t work comes through as frustration with the guys but ultimately I think it’s pure sadness and she probably cries every time. Fully expressing that, that she’s hurting, I think that happens in life, you get really honest about something and things change and you’re understood a little more.

Q: Ever since the success of “Bridesmaids” there’s been a conversation happening, and it came back this summer with both “Spy” and “Trainwreck” …

A: You’re not going to ask me the “women in comedy” question, are you?

Q: In a roundabout way. Why do you think the question keeps getting asked? What about it hasn’t been answered?

A: I think the fact that people keep asking it implies that it’s something we need to explain or defend. If (people) would watch movies or look at comedy and see how many talented, funny women are out there and have been since the beginning of time, people would stop asking that. The other side of it is we’re still not there as far as opportunities. But people are doing the work.

Q: I also feel obligated to ask you something about “Ghostbusters.”

A: Sure. I may not be able to answer, but that’s not my fault.

Q: Have you ever made a movie that had so much attention and even controversy attached to it as you were making it?

A: No. And the fact there was so much controversy because we were women was surprising to me. Some people said some really not nice things about the fact that there were women. It didn’t make me mad, it just really bummed me out. We’re really honoring those movies.