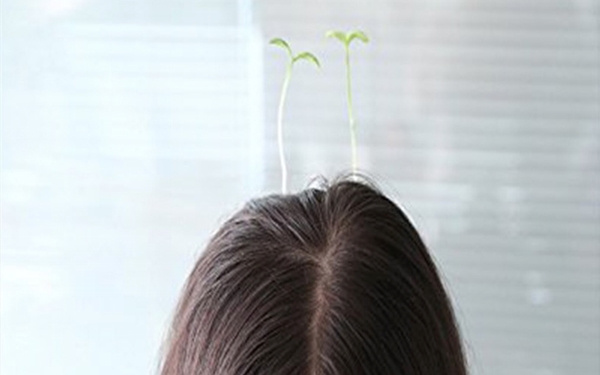 BEIJING — At first blush, it may sound like some terrible side effect from Beijing’s notorious smog: verdant seedlings popping out of the skulls of men and women in the Chinese capital.

But don’t blame pollution. The bizarre phenomenon has mysteriously sprung forth from China’s collective fashion id, which seems to fall hard for anything random, cute and cheap. Even better if it can be worn on your head.

Not so long ago, it was headbands with cat ears that were all the rage, giving wearers a vaguely kitten-like appearance. But since late summer, the fad is hair barrettes with plastic flora sticking straight up from one’s scalp.

“It’s just cute,” said Yang Xiaoyu, 32, an office clerk from the city of Tianjin who was shopping for one of the mini green antennas recently in Beijing’s trendy South Luogu Alley tourist district.

Vogue’s Anna Wintour probably would disagree. But that didn’t stop Yang from paying about 40 cents for a bean sprout-like model with two small leaves and affixing it to the crown of her head. The adornment reminded her of a worm-like character called Tangbao in her favorite TV show, “The Journey of Flower.”

“Last year, it was cat ears; a lot of people follow these cute or kawaii kind of trends from Japan,” she said.

Whether the fad originated in Japan or is homegrown is a matter of debate.

Some people say the trend originated at a comic or anime convention. The vendor who sold Yang her sprout, a 45-year-old man surnamed Zhang, said he heard that a farmer in China’s Sichuan province was watching TV and saw a program that mentioned similar things were popular in Japan, and decided to copy the idea.

But the fashion trend has a slightly awkward echo of an old Chinese custom whereby poor people would put dry grass on their heads as a way to advertise the fact that they wanted to sell themselves as slaves or wives.

The practice, referenced in Chinese literature dating back centuries, was a common means of raising funds for a proper burial of one’s parents.

Most young buyers these days don’t know or care about that, though, Zhang and his wife said.

Sprouts like the one Yang bought are the most popular, explained Zhang, though there are more florid options — red mushrooms, sunflowers and red chili peppers — for those who want even more flair in their hair. Men and women, foreigners and Chinese — all are buying.

His wife, surnamed Wan, pulled out her smartphone and showed off photos of two Muslim tourists from Malaysia wearing head scarves; she sold them color-coordinated sprouts, which gave the women a resemblance to Teletubbies.

Wan and Zhang live along the alley and sell cheap souvenirs from their front stoop. When a wholesale dealer first approached them and offered to sell them the barrettes, Wan said she refused.

“I didn’t think they’d sell well,” she said. But when she saw her neighbors were giving the new product a go, she jumped on the bandwagon. Some of her competitors buy their wares online, but she gets hers from the door-to-door wholesale peddler. Sales have been bolstered by celebrities posting selfies with sprouts in their hair.

“This trend will probably last until the end of the year; they keep coming out with new models,” Zhang said. The next iteration may be fauna. “We’ve heard they’re going to have one soon with a cockroach on it.”

Ni Yongqin, 68, was among the first sellers along the alley. Usually, she deals in hand-sewn beanbags good for juggling, but lately she’s been hawking the barrettes, which have sold like hot cakes.

Competition, though, is heating up, and she’s had to cut her prices in half. “I started out selling them for 5 yuan (nearly 80 cents) apiece but now the going rate is 2 yuan,” she said.

Ni has been living along South Luogu Alley for 20 years and has watched it transform from a quiet residential area of traditional gray-brick courtyard homes into a bustling pedestrian street packed with frozen-yogurt shops, bars, T-shirt sellers and even a Starbucks.

“Of all the trends I’ve seen,” she said, “this is the strangest.”

She paused to take some cash from Xu Yang, and his girlfriend, Yang Yan. The 30-year-olds were visiting Beijing from Changchun. They bought matching barrettes featuring little yellow gourds with green sprouts on their stems, clipping them into their coifs.

If only Alfalfa from “Our Gang” were around to see this.

Nicole Liu in The Times’ Beijing bureau contributed to this report.