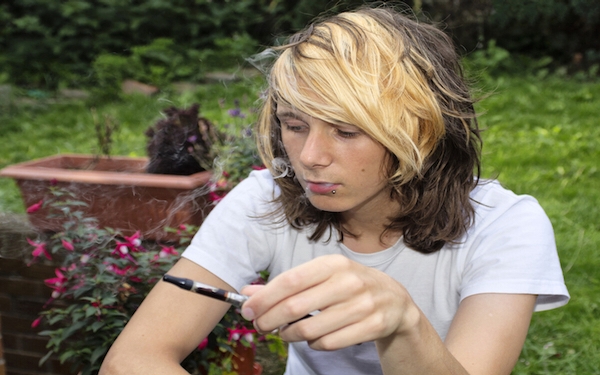 Some experts believe e-cigarettes are a gateway to regular cigarettes among teens.
(Credit: Fotolia/TNS)

For years, electronic cigarettes have ridden the vapor of respectability as a technology cigarette smokers can use to get nicotine while avoiding tobacco’s health risks.

Their use continues to grow, based in part on their reputation as a gateway out of the cigarette habit.

While that point is not the focus of debate, the discussion has shifted to concern that e-cigarettes may be enticing teenagers and young adults to try regular cigarettes.

“This is the question people are asking: Are e-cigarettes helpful for people as a gateway out of cigarette smoking, or might they also be a gateway in?” said Brian A. Primack, director of the University of Pittsburgh Center for Research on Media, Technology and Health and assistant vice chancellor for research on health and society.

A recent study led by Dr. Primack that used Dartmouth University data and was published in JAMA Pediatrics, is controversial with its claims of an association between e-cigarette use among nonsmoking teenagers and young adults and cigarettes.

E-cigarettes “are more amenable, milder and more accessible,” while standard cigarettes are vilified in the popular media, Dr. Primack said. ”Here’s this thing being touted as safer — this cool electronic gizmo that you can plug into your USB port on your computer, that lights up and young people find it more attractive in the beginning, but with later transition to cigarettes.”

It might seem illogical, the shift from a trendy electronic appliance whose delicious juices produce thick, white but odorless and generally harmless vapors to ill-smelling, bad-tasting cigarettes that produce acrid smoke and dirty ashes and butts.

But e-cigarettes allow users to get used to nicotine, making the advance to cigarettes much easier.

“In theory it sounds wonderful for a lifelong smoker having a hard time quitting and not successful with nicotine patches or gum to use e-cigarettes that mimic cigarettes and are a good replacement,” Dr. Primack said. But he adds that “it’s not hard to find testimonials from people who (used e-cigarettes to) quit smoking. The potential is there for some people to derive benefit.”

Advocates of e-cigarettes as gateways out of smoking agree on a sales ban to minors. But they aren’t lighting up to the Pitt-Dartmouth results.

Bill Godshall, executive director of Smokefree Pennsylvania, reacted angrily to the study, calling its conclusions false, and claiming it was published only to encourage stricter regulations of e-cigarettes.

He noted that only Pennsylvania, Missouri and Maine currently lack a ban of e-cigarette sales to minors. ”The only way to study the gateway-drug effect is to study daily, or at least frequent, usage patterns.”

His opinion is shared by Brad Rodu, a professor of medicine who heads tobacco harm reduction research at the University of Louisville. In his blog, he said study findings were distorted and misinterpreted. One complaint, he said, is the claim that one mere act of trying a cigarette is considered usage. “We do know that omitting important information is a fatal flaw in this study,” Dr. Rodu stated.

Meghan Snatchko, 33, whom the Post-Gazette interviewed in 2014 about her use of e-cigarettes to stop smoking, said she has never returned to cigarettes and continues using snake oil (coconut-cream-pear flavor) and prestigious pineapple ejuices containing only a small dose of nicotine. She refrained from vaping e-cigarettes during her pregnancy September 2014 through June.

“I totally disagree with the idea it’s a gateway to smoking,” she said “You rarely find people who pick up e-cigarettes who never smoked before.

“This is a much more pleasant experience. Your clothes don’t smell, and your sense of taste and smell improve,” she said, noting that she’s running again now that she has quit smoking. While there’s no current law banning the sale of e-cigarettes to minors in Pennsylvania, she said, she’s often carded at vape shops, which have decided on their own to ban sales to minors.

Charles Moran, spokesman for the Pennsylvania Medical Society, stated recently that respective House and Senate judiciary committees have approved bills to ban the sale of e-cigarettes and other nicotine-delivery methods to minors, the House bill newly defining nicotine-delivery products and adding them to the list of tobacco products whose sale to minors would be prohibited.

A University of Michigan Monitoring the Future study and report on Aug. 31 states that cigarette smoking continues declining among the nation’s college students, with 13 percent saying they’d smoked one or more cigarettes in the past 30 days. That’s down from 14 percent in 2013, the recent high mark being 31 percent in 1999.

Lloyd Johnston, the principal investigator of study, attributed this decline to lower rates of smoking among high school students.

But the report also says appreciable declines in cigarette smoking are accompanied by increased usage of other forms of tobacco or nicotine, including the water pipe known as hookah, with 33 percent of college students having used hookah in the past 12 months. The use of e-cigarettes in the past 30 days stood at about 10 percent.