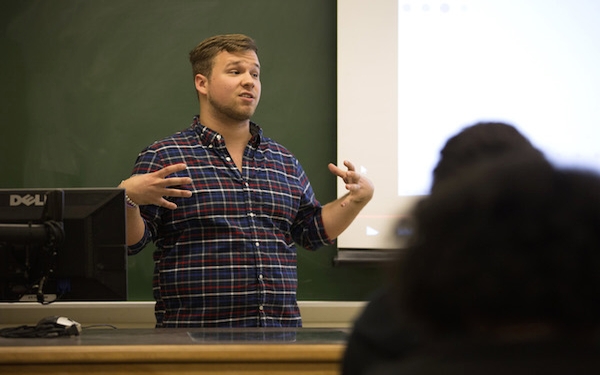 CHICAGO — For Blake Bullock, talking about sex is nothing new. As a peer educator at the University of Illinois, he leads discussions on everything from birth control to sexually transmitted diseases. But recently, the conversations have taken a decidedly different turn.

“We’re spending a lot of time on the nuances of consent because that’s where many students get tripped up,” said Bullock, a graduate student in social work in Champaign. “They do worry that it’s going to ruin the mood.”

As sexual assault cases on campuses have moved from private matter to public spotlight, college officials are revamping their sexual misconduct policies and replacing the old rules of “no means no” with a new norm of “yes means yes” — otherwise known as affirmative consent.

It’s defined as “an affirmative, unambiguous and conscious decision by each participant to engage in mutually agreed-upon sexual activity,” according to state laws in California and New York that set the standards for policies at many colleges across the country, including Illinois, which has not written an affirmative consent standard into law. The consent must be “ongoing” throughout any sexual encounter; silence or lack of resistance does not indicate agreement.

Proponents of affirmative consent say it is a valuable tool to address sexual misconduct and will help clarify the difference between consensual and coercive sex.

Critics say the policy, while well-intentioned, is unenforceable and may even violate civil rights. This is, after all, a pastime that rarely has witnesses and frequently involves alcohol.

“No one denies that consent is required for sexual activity, but the problem is when the burden of proof shifts to the accused to prove his or her innocence,” said Samantha Harris, a lawyer with the Foundation for Individual Rights in Education, a Philadelphia-based organization, which opposes the standard. “It’s an overcorrection.”

An estimated 1,500 institutions of higher education now use some type of affirmative consent definition in their sexual assault policies, according to the National Center for Higher Education Risk Management, a consulting group. In October, California went one step further by requiring all high schools to teach the standard in health classes.

Sexual misconduct — including stalking, exploitation and other forms of harassment — is widespread on college campuses. The Association of American Universities recently polled more than 150,000 students at 27 institutions and found that 23.1 percent — nearly 1 in 4 — of undergraduate women and 5.4 percent of men said they had experienced some kind of unwanted advances.

“Sexual violence is a huge issue in our society, and we hope these efforts open up a broad network of support for those who feel like they have nowhere else to turn,” said Molly McLay, assistant director at the University of Illinois Women’s Resources Center.

The issue has sparked a flurry of activity on campuses statewide, where schools are implementing more rigorous policies to help students navigate sexual encounters. Almost every institution has upgraded their websites, improved outreach and increased staffing, such as a new men’s engagement coordinator at Northwestern University, who educates male students on boundaries.

After the University of Chicago conducted its own survey on sexual misconduct, Provost Eric Isaacs called the findings “deeply troubling” in an email to students, faculty and staff in September. The university is convening small groups to discuss the results, which were similar to those of the Association of American Universities’ study. “We each must play a role if we are going to address sexual misconduct,” he wrote.

The period between the start of the academic year and Thanksgiving is often referred to as the “Red Zone,” considered the most vulnerable time for sexual violence, experts say.

That’s why schools are mandating attendance for incoming students at a wide array of awareness workshops, such as “Sex Signals” at the U. of C. The presentation, by Catharsis Productions, a Chicago-based education group, uses an “unorthodox, humor-facilitated approach to examining our culture, sex and the core issue of bystander intervention,” according to its website.

“For many of our audiences, it’s the first chance to talk about sex,” said Gail Stern, co-founder of Catharsis, which does about 250 college appearances annually. “It’s not only about how do you make sure your partner wants to do that, but why that’s important.”

Simone Brandford-Altsher, a sophomore at the University of Chicago, has heard objections that the new rules are confusing or impractical, but says they ensure more accountability and respect.

“Why would you risk hurting someone just because you didn’t want to hear ‘No’?” she asked. “This is a step in changing the culture, because something has to change.”

The affirmative consent standard will be used at virtually all colleges to evaluate sexual assault complaints and apply only to internal campus disciplinary proceedings, not to criminal courts. Even so, the stakes can be high, including expulsions — and no one is exempt, including faculty.

Schools are mandated to get on board, as tackling sexual assault has become a high priority in Washington.

In 2014, the White House established a Task Force to Protect Students from Sexual Assault, with the aim of combating sexual violence on campuses.

Under Title IX, the federal law designed to prevent gender discrimination in education, schools that receive federal funds are now required to examine and respond to all sexual assault cases or risk a probe by the U.S. Department of Education’s Office of Civil Rights. In May 2014, the office released the names of 55 colleges under investigation for alleged mishandling of rape and sexual assault complaints. There are now 173 such cases at 144 postsecondary institutions, up from 17 in 2012.

Harris, of the Foundation for Individual Rights in Education, says the momentum has less to do with safety than public relations.

“Too often, schools used to sweep this under the rug, especially if it involved a star athlete. But now the fear of bad publicity is why everyone is rushing to crack down without considering the rights of the accused. The pendulum has swung too far in the other direction. The question is: How do we find the right balance?”

Alan Cubbage, a spokesman at Northwestern, agrees that the remedies are imperfect. “We do teaching really well. We do research really well, but this forces us into a quasi-judicial role that may not be our greatest strength.”

The new standard has opened a national dialogue on the topic, but it falls to peer educators like Bullock to demonstrate how, in the real world, to engage in more intimacy while getting explicit agreement.

He keeps it light, trying not to sound like someone fumbling for a notarized permission slip.

“If you are going to proceed with another sexual act, you want to check in,” Bullock said. “You might say something like ‘Do you want to do more than we’re doing right now? Should I get a condom? If the partner says ‘yes,’ then they are saying, ‘I’m OK with having penetrative sex.’ Or they may say, ‘No, I’m not ready for that.’ We brainstorm about ways to get consent that don’t sound too formulaic or robotic.”

Checking in can actually enhance the mood rather than squash it, he said.

“It’s not only about safety and well-being. Intimacy is actually more enjoyable because you are getting exactly what you want.”