By Kathyrin Barron - The Hechinger Report 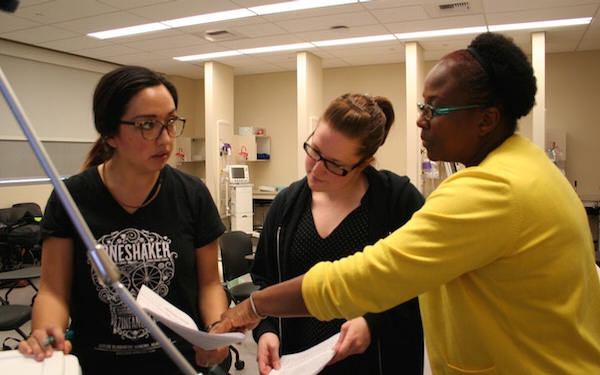 MODESTO, Calif. — When Emily Littleton was growing up, she was often awoken at night by the sound of her younger sister wheezing and struggling for breath from an asthma attack. Littleton would grab the nebulizer, hook it up for her sister and get her dad.

The experience remained deeply rooted in Littleton’s memory, resurfacing several years after she graduated from high school as a calling for a career. The first time she attended community college, Littleton said she vacillated from major to major, finally earning a two-year degree in natural sciences. Then, while working at an assisted living facility, she heard about the respiratory therapy program at Modesto Junior College in California’s Central Valley, and her past echoed, directing her choice of a career. In December, Littleton and her 23 classmates will graduate with their associate’s degrees.

But those degrees are already on the verge of becoming obsolete, as respiratory therapy and other skilled fields increasingly require a higher level of education in order to meet rapidly expanding demands for greater technical know-how and knowledge. An associate’s degree just won’t cut it anymore.

Carroll helped launch a campaign to make it easier for students to earn bachelor’s degrees in these key areas. Last year, after two failed efforts, the state Legislature gave the go-ahead for some community colleges to offer bachelor’s degrees on a limited basis. California, normally a bellwether in public higher education, was behind the curve this time: 21 states, from West Virginia and Vermont to Florida and Texas, gave community colleges this opportunity years ago.

California’s law created pilot programs at 15 of the state’s 113 community colleges in specific high-needs technical fields. From a pool of 34 applicants, the statewide community college Board of Governors selected two schools to offer respiratory therapy baccalaureates, two to offer dental hygiene, and two others to offer degrees in health information management.

Beginning in 2017, Littleton and her classmates will have the opportunity to earn a bachelor’s degree in respiratory therapy at a fraction of the cost of traditional four-year colleges and universities, without leaving Modesto Junior College. They are also likely to end up with a significantly higher salary.

Concern over the state’s economic outlook helped push the law through.

California will need about 1 million more people with bachelor’s degrees by 2025, according to the Public Policy Institute of California, a Sacramento-based nonprofit, nonpartisan think tank.

A number of educators and policymakers, including California Gov. Jerry Brown, doubted the state’s ability to meet that goal without including community colleges, which serve a little over 2 million students a year — more than triple the combined enrollment of California State University and the University of California.

Community colleges bring these opportunities to nontraditional students nationwide. With an average student age of 28, more than 60 percent of full-time community college students work, a third are the first in their family to attend college, and nearly as many are raising children of their own.

To be considered for the pilot program, colleges already had to offer an associate’s degree in a high-need field and provide evidence that local employers want and need more people with bachelor’s degrees in those professions, a fact that would almost guarantee graduates a job right out of school. Another key provision, the lack of which would have been a deal breaker for California State University and the University of California, prohibits the new community college programs from duplicating those already available in the four-year state university systems.

Modesto Junior College’s popular respiratory therapy program met all those qualifications. The two-year associate’s degree program regularly receives about four applicants for each of its 24 spots, and 98 percent of the students graduate on time, according to Bonnie Hunt, director of the respiratory therapy program. Hunt said she anticipates admission to the baccalaureate program will be even more competitive.

“The first day that it was announced on the news, we had so many calls that we had to develop a link on the website so frequently asked questions could be answered,” Hunt said.

Many residents of Stanislaus County, where the college is located, have firsthand experience with breathing problems. The region is renowned as much for its agricultural production as its high poverty rate and terrible air quality. About 62,000 county residents have been diagnosed with asthma, according to the California Department of Public Health, and nearly 3,000 of them wind up in the emergency room every year.

Two years in college is no longer considered enough time to learn all the skills now required.

Respiratory therapists attend all high-risk deliveries and are among the first responders in emergencies, said Hunt. When someone “codes” — shorthand for a patient whose heart and breathing have stopped — respiratory therapists often arrive before the doctor. They need to be able to quickly and accurately assess these patients and monitor their breathing once they’re on a ventilator.

“I think it’s the clinical aspect that gets under-served in a two-year program,” said Dr. Dai Park, an allergist in Modesto. “(Respiratory therapists) are the ones to alert a physician if something doesn’t seem right or if patients aren’t responding well to therapy. For a role that key, the more clinical experience you have, the better served we are.”

Students in the two-year program agree.

“There’s so much that we’re not able to learn in the two years,” said Modesto associate degree student Bree Nance, who will be applying for the baccalaureate program. “There are some topics I wish we could have gone into more depth about, maybe the diseases and the process of the diseases.”

Professional associations have come to the same conclusion and are advocating more comprehensive education. In its new strategic plan, the American Association for Respiratory Care recommends that 80 percent of respiratory therapists have a baccalaureate by 2020.

When Hunt earned her degree in 1985, respiratory therapists were using portable ventilators with knobs they dialed to increase or decrease the flow of oxygen. Today, she teaches in a classroom with computerized ventilators.

Modesto Junior College’s respiratory care department is located in a new allied health building designed with a state-of-the-art lab, known as the human patient simulation center, which could easily be mistaken for a hospital intensive care unit.

Hunt and her nursing school counterparts are developing collaborative projects for the center. Specific details of the baccalaureate curriculum are still being worked out, but Hunt said the emphasis will be on advanced clinical work in specialty areas, such as sleep studies, critical care of infants, children and adults, and diagnostics. Students will also study research, management and community and patient education.

Demand for respiratory therapists is increasing as the population ages and more people have access to health insurance through the Affordable Care Act. In 2012, there were 119,300 respiratory therapy jobs in the country and 1,359 in the Central Valley. The job outlook was expected to grow by 19 percent within six years. That’s “faster than the average for all occupations,” according to the U.S. Bureau of Labor Statistics.

Growth may be even larger in California. Nearly half of all respiratory therapists are in their mid- to late 40s through 60s, a period of life in which people may start contemplating retirement.

Higher degrees also bring the potential for higher salaries. The median salary for respiratory therapists in California is a little over $77,000, topping the national average by nearly $20,000 — and that’s without a bachelor’s degree.

“These are doorways to the middle class for students,” said Carroll, chancellor of San Diego’s community college district.

Tuition also will be considerably more affordable than bachelor’s degree programs in the California State University and University of California systems. California’s community colleges cost $46 a credit for an associate’s degree, but about half the students receive Board of Governors fee waivers and pay no tuition. The bachelor’s degree programs will cost $84 a unit for just the last two years, making it possible to earn a four-year degree for about $10,000. That’s less than the cost of one year at Cal State. Private schools are at least four times as expensive.

Location of the schools is a factor not just in terms of meeting the employment needs of a region, but also for meeting the students’ geographic limitations. Each of California’s counties is served by at least one community college, whereas the closest CSU campus may be 200 miles away and take hours to get to on public transportation. Commuting for hours a day or moving to live closer to a four-year college aren’t reasonable options for older students who need to be near families and jobs.

Given the opportunities the new programs will provide, Pamela Walker, the vice chancellor for academic affairs at the state community college chancellor’s office, expects the pilots to be hugely popular and estimates that within three years, all 15 programs combined may have “upwards of 5,000 students.”

However, she said maintaining quality will be paramount. That means admission into bachelor’s degree programs will test California’s historic mission of open access to community colleges. That won’t change for the first two years of the program, said Walker, but students will be required to maintain a minimum GPA — probably 2.0 or 2.5 — to be considered for the baccalaureate portion of the program

“We still want to provide access,” Walker said. “We also have to have some rigor so that students can be successful at the advanced level.”

Pam Piccione feels confident that she has an excellent chance of being admitted to the pilot bachelor’s program in dental hygiene at Foothill College in Los Altos Hills, near San Jose, where she just earned her associate’s degree in the field. She said a four-year degree is essential for professional advancement.

“I could go back and teach at my school. I could work in the field for a company and do sales or research,” Piccione explained. “I don’t think I’d even be looked at if I didn’t have a bachelor’s degree.”

(This story was produced by The Hechinger Report, a nonprofit, independent news organization focused on inequality and innovation in education. Read more about California.)