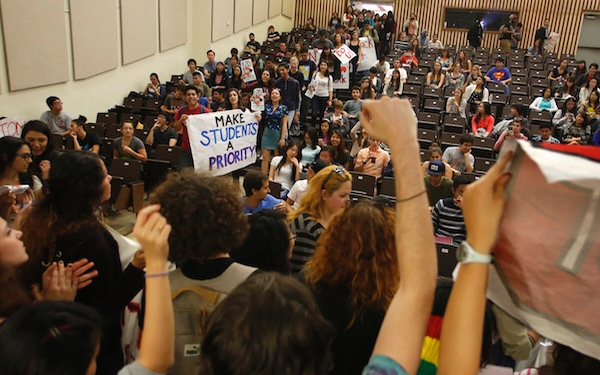 Students march through a metabolic biochemistry class on the campus of U.S. San Diego on Nov. 24, 2014 as part of a systemwide day of action protesting a proposed tuition increase.
(Credit: Don Bartletti/Los Angeles Times/TNS)

The 12-member university committee concluded that a reliance on state funding, even in a growing economy, is no longer sufficient to expand enrollment, expedite the time it takes to earn a degree and pay for badly needed technology and facility upgrades.

The report is scheduled for discussion by Cal State trustees at their November board meeting. Proposals are still in draft stage, and a final report will be presented in January.

The tuition proposal especially is likely to spark opposition from students and many lawmakers who say that annual rates — currently $5,472 for undergraduates — already are too high and lock out many qualified students.

The 23-campus Cal State system has not raised fees for four years under a plan by Gov. Jerry Brown that provides the higher education system incremental increases in state funding.

That growth, however, is far from making up for budget cuts during the recession that surpassed $1 billion for the Cal State and University of California systems.

During negotiations over the 2015-16 budget, UC eventually pulled back on a threat to raise tuition as much as 28 percent over five years after striking a deal with Brown for more funding.

Both Cal State and the University of California have long argued that extended periods without tuition hikes are not sustainable because of inflationary increases in such areas as healthcare, energy, salaries and pensions.

Small and predictable adjustments in tuition and fees allow students to more easily plan for education costs, officials contend, and would avoid the need for dramatic annual spikes such as the 22 percent hike at Cal State in 2011-12.

“Enrollment demand continues to exceed capacity, which presents a dilemma for the CSU,” the report said. “Denying admission to eligible students or accepting them without the additional or sufficient funds to offer an efficient pathway toward graduation are not acceptable alternatives.”

Among the group’s major recommendations:

Small, annual tuition increases tied to the rate of inflation — or on the order of about 2 percent. Such a boost given current tuition would yield about $30 million more in revenue a year and cost students about $50 more per semester.

A year-round academic calendar for some campuses that would expand summer sessions and allow for more efficient use of facilities and more flexible scheduling for students.

Allocation of some campus funding based on student performance, such as the time to earn a degree, income after graduation and other measures. The report recommends that the legislature change education laws to allow the system to expand its investment options to include those that could yield higher returns.

The panel also suggests that eligible Cal State applicants be steered to campuses that haven’t reached enrollment limits — even if those campuses are not their preferred choice.

Another proposal that could generate friction suggests that a systemwide student facilities fee may be necessary to pay for new academic buildings and infrastructure. So-called student success fees ranging from about $200 to more than $800 collected from students on top of tuition have been an option on many campuses to raise revenues. But their use is highly contentious and trustees and the legislature have imposed restrictions.

The proposals are intended to provide a starting point for discussion to improve student success in the 430,000-student system, said Elliot Hirshman, president of San Diego State University and co-chairman of the task force.

Cal State also will continue to vigorously pursue additional state funding, with the tuition increases a contingency should funding fall short, he said.

The system lobbied hard to win its full request of $216.6 million in additional state funding for 2015-16, but that has not been the pattern in recent years.

One key question was to determine whether all students, even those with low incomes, should be required to pay more of their education costs as an incentive to finish their degrees on time. The panel suggested that Cal State monitor the growth of tuition discount grants. But Hirshman said the task force is not proposing to reduce financial aid.

“The biggest impact of the task force is not in any particular proposal but in fostering an openness in discussing of how best to serve students — and how resources are critical to their success,” Hirshman said.

Many students, though, are already gearing up to oppose some of the recommendations, such as increasing student fees and changing investment policies.

The Cal State Student Association has yet to adopt a position on the proposals, said President Taylor Herren, a graduate majoring in agriculture at Cal State Chico.

But potential tuition increases and the facilities fee are raising concerns.

But students are aware that some changes are unavoidable.

“We know that Cal State doesn’t have the financial support it needs at the moment and it’s not going to,” Herren said. “We have to revamp our entire financial model.”

Other proposals could be controversial, such as allowing individual campuses to set out-of-state tuition, which could open a “Pandora’s box” of eventually allowing them to set different tuition for California residents, said Hans Johnson, a senior fellow at the Public Policy Institute of California.

The suggestion that Cal State needs a new financial model raises questions about the relevance of the state’s much-vaunted Master Plan for Higher Education, created in 1960 as a blueprint for tuition-free access for Californians to every major segment of higher education, Johnson said.

Cal State will probably use the proposals in whatever form they end up as leverage with lawmakers in Sacramento to remain committed partners.

“At the end of the day, they’re saying, look, we’re implementing a number of procedures to be as efficient as we can be, but we still need state funding,” Johnson said.