Iranian filmmaker disguises himself as a cabbie in fascinating ‘Taxi’ 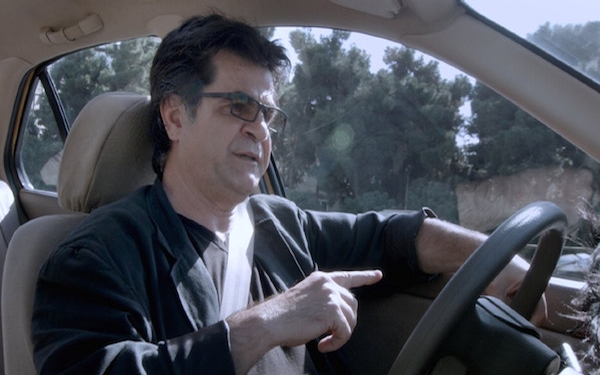 In 2010 the Iranian government arrested “White Balloon” and “Crimson Gold” filmmaker Jafar Panahi on charges of anti-government propaganda (he’s an outspoken supporter of Iran’s opposition movement) and sentenced him to six years in prison as well as a 20-year moviemaking ban.

Panahi has managed to avoid jail time. Remarkably, he has managed also to make three features since his arrest, films inevitably addressing the strange circumstances under which they were made as much as they concern contemporary Iran itself.

His post-arrest works, “This is Not a Film” (2011) and “Closed Curtain” (2013), were shot inside an apartment and a beach villa, respectively. (Panahi is allowed to travel within Iran, but not outside the country.) Now comes his latest, “Taxi,” and it finds the writer-director in moods both playful and bittersweet.

In “Taxi” Panahi plays himself. Banished from filmmaking, at least in theory, he makes a pretty poor cabdriver, always getting lost, often redirecting his passengers to other taxis and, out of guilt or kindness, neglecting to collect his fare. Made surreptitiously on the streets of Tehran, “Taxi” required three dash-cam video set-ups to capture the interactions inside and outside the vehicle. This is a personal essay disguised as a selfie documentary, though each new passenger Panahi meets is, in reality, played by an uncredited actor. Often Panahi is recognized by a passenger as one of Iran’s disfavored sons.

The conversations reveal so much in so few minutes (82 minutes in all). A self-described “freelance” hustler argues with a fellow passenger, a schoolteacher, about the merits of Shariah. Hang a couple of tire thieves, the man suggests, and it sends a message. The educator notes, as a counter-argument, that the hustler is pretty quick with the death sentences. She suggests that Iran untangle the roots of its impoverished, desperate citizens’ problems.

Despite that previous sentence “Taxi” is disarmingly breezy. A dealer in bootleg DVDs enters the taxi, recognizes Panahi from his video store, and recalls that the filmmaker recently took out contraband copies of Nuri Bilge Ceylan’s “Once Upon a Time in Anatolia” and Woody Allen’s “Midnight in Paris.” A bleeding man and his screaming wife, moments after a bike accident, are shoved into the taxi by a group of bystanders. Driving to the hospital, Panahi listens as the injured man (the DVD peddler filming all the while on a cellphone) concocts a last will and testament. Islamic law prevents his wife from inheriting. “At most she’ll get a few turkeys,” the man says.

It’s all doctored to resemble real time, unfolding naturally. Part of the stealth charm of “Taxi” is the way Panahi winks at his own conventions. My favorite face of the moviegoing year belongs to Panahi’s real-life niece, Hana Saeidi, whom Panahi is an hour late picking up from school. Wide-eyed, full of attitude, she has been assigned by her teacher to make a short film following the Islamic laws for (key word here) “distributable” movies. What makes a distributable film, Panahi asks, in the middle of his own undistributable “Taxi”? Flipping through her Angry Birds spiral notebook, Hana reads aloud the rules and regulations: “Respect the Islamic headscarf, no contact between men and women, avoid sordid realism . . . avoid discussing political and economic issues.” Films for Iranian screens must be scrubbed of any “dark and unpleasant” realities. They have to be real, but not, in her words, “real-real.”

From its initial first-person, behind-the-wheel viewpoint to its final implication of all-pervasive surveillance, Panahi creates a fascinating hybrid that becomes a microcosm of Tehran. Earlier this year, “Taxi” won top prize at the Berlin film festival. The Iran culture ministry issued a clenched smile of a statement, congratulating Panahi while also condemning Berlin for honoring a film that promoted “misunderstandings” about life in Iran. The filmmaker, according to the statement, is “freely enjoying” the “blessings” afforded by Iran. See “Taxi”; it’s a small but extraordinary testament to a filmmaker who may be confined, and banned, but he is hardly diminished.