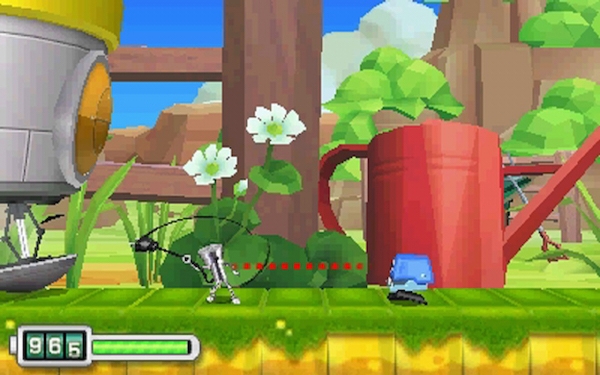 If Nintendo’s wide array of characters can be divided by popularity like a high school lunchroom, Chibi-Robo would be sitting with Dr. Kawashima and a few Nintendogs. The publisher is checkered with franchises that have been successful in the past to varying degrees, but failed to catch on long term. “Chibi-Robo” has been home to experiments like “Park Patrol” and “Photo Finder,” but “Chibi-Robo: Zip Lash” puts the character in a more traditional side-scrolling platformer. Nintendo’s sharp eye for design and polish makes this one breezy fun that overcomes some of its odd shortcomings, but feels unlikely to elevate him to the popular table with Mario.

Nintendo’s flagship plumber does carry a lot in common with Chibi-Robo, though. The sensation of jumping and even bopping enemies on their heads could be pulled straight from a recent “Mario” game, partly because that sense of momentum is so familiar in the gaming lexicon that Nintendo must not feel the need to fix what isn’t broken. Plus, “Chibi-Robo: Zip Lash” carries itself with occasional moments of weirdness that feel reminiscent of the Mushroom Kingdom, usually in the form of secondary characters.

The strangest element of all is the product placement, expanding on a trend from Pikmin. “Chibi-Robo” is filthy with collectibles, but the standouts are the various actual candy and snack products found throughout the world. Most are Japanese snacks, though some deals must have been struck with American companies like Utz. These can be given to hidden characters hankering for a snack, who will reward you with some moolah (money) and a short advertisement. You’re even encouraged to post about it on Miiverse!

The approach sounds irritating, and it certainly could be, but it’s so over-the-top bonkers that I actually laughed. If you’re going to use product placement in any medium, you either need to make it so subtle we barely notice or so on-the-nose that you’re winking at the audience. Nintendo took the latter approach and I appreciated it.

SHARP AS A WHIP

Chibi-Robo is no platforming clone. “Zip Lash” sees the tiny robot use his plug like some combination of whip and grappling hook, and most of the platforming is based around that mechanic, from defeating enemies to swinging from ceilings. The title comes from his “Zip Lash” move, a charged whip that grows in length as you find baubles throughout each stage. It ricochets off walls, so many of the puzzles involve bouncing it at the right angle to pick up collectibles or reach a grapple point. It’s like the mashup of “Mario” and “Castlevania” I never knew I wanted.

Those excellently designed platforming stages are punctuated by vehicle segments, which are almost universally awful. One particular vehicle, a sort of tiny hot air balloon, uses controls so nonsensical that it felt nearly impossible to progress. What’s worse, the vehicle segments are usually straight runs with instant death and no checkpoints, so if you fail you need to start over from the beginning. Or, after dying a couple of times, you can pay some of your moolah to skip them and get back to the good stages.

There’s no particular guarantee of which stage you’ll move to next, though, thanks to an utterly backwards level selection mechanic. Instead of progressing across stages in a normal order, the end of each stage presents a board-game-styled spinner. (You have a certain number of tries based on your success with a small ricochet puzzle at the end of each stage.) The spinner always shows the numbers 1, 2 and 3, and naturally I assumed that if you hit the higher numbers you would skip stages and progress towards the boss faster.

Not so. Each world’s stages are presented in a closed loop, and you need to finish all of them to progress to the area boss. That means if you skipped any stages, you just need to circle back around to them — likely replaying some of your other completed stages on the way. I’m not sure why Nintendo felt something so fundamentally simple as stage progression needed its own twist, and this isn’t even a good one. The pattern of the spinner becomes easy enough to exploit, but there’s no reason you should ever aim for anything other than a “1,” which renders the exercise pointless.

Nintendo similarly halts progress at the very end, requiring several big moolah purchases before proceeding to the final boss. It was frustrating to see such an excellently designed game trip over itself so often with bothersome, unnecessary gating.

It’s a testament to its stage design, though, that I came away feeling utterly satisfied despite the game so constantly getting in its own way. “Chibi-Robo” may not be destined for Nintendo stardom, but “Zip Lash” shows how the tiny robot still has plenty of room to grow, experiment and find what works for him.

This review is based on a 3DS retail copy provided by the publisher. Chibi-Robo: Zip Lash is available for $29.99. The game is rated E.

GamerHub is a leading online provider of videogame, entertainment and lifestyle content, as well as community and interactive services. Read more at GamerHub.tv

Reviews
‘Fire Emblem: Three Houses’ is Nintendo at its most flirtatious
2,472 views