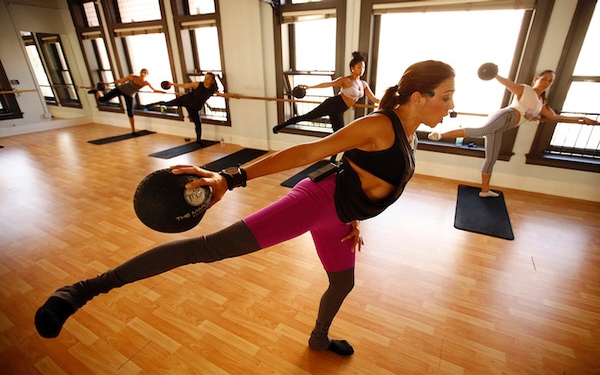 I never took a single ballet class as a girl, despite my whining, and while I got over that, I still can’t ignore the allure of long, graceful muscles and good posture, which are the sweet promises behind barre workouts.

Barre teachers say the workout’s combination of dance exercises, yoga and Pilates is perfect for an age when many of us spend hours hunched over devices, our behinds on desk chairs. We seem to agree: There are hundreds of barre programs out there, from boutique studios to their corporate cousins, Dailey Method, Pure Barre and Physique 57 among them.

“As an athlete, I do CrossFit and I like barre as a complement to the high-intensity workout,” says Allison Hagendorf, a health coach and the founder of FitToFeast.com.

Barre is popular, she says, because it’s “completely inclusive. Everyone can do it. It’s not intimidating. And it’s about flexibility and tiny movements.”

Much of the work in a barre class (generally mostly women, though open to all) involves small movements done in precise ways. It might seem that such a workout can hardly make a difference, but most practitioners look great, and a class can wear out even a fit person. The idea is to target specific muscles, such as transverse abdominals, psoas majors, inner thigh and obliques, ones that don’t always get attention.

“It works on your alignment of the body. Someone who is well aligned, standing with ears over shoulders, shoulders over hips, it creates a fit look from the start. Your shoulders are not rounded,” says Elisabeth Halfpapp, a former dancer who, with her husband, created the Core Fusion barre exercise program.

Like any method, each studio has its own style, some focusing more on cardiovascular workouts, some more on yoga. But barre has some core notions that play out in most studios. There are workouts at the barre and on mats to work specific parts of the body — thighs, for example. Position and alignment are key. There’s lots of clenching of glute muscles and pulling belly buttons in toward the spine.

Brittany Egbert, 25, owns a Pure Barre studio in North Hollywood, one of 300 Pure Barre locations. Her hourlong class is full of exact, muscle-isolating movements in the company’s structured program of warm-ups, thigh exercises, “seat lifters” and other moves. “You should be thrashed by the end,” she says. I was.

“I nerd out about this. It absolutely changes how you use your body,” says Egbert, who began teaching barre while a student at University of California at Irvine. She has written a musical anthem in tribute to Pure Barre that’s posted on YouTube.

Hagendorf likes barre’s focus on the core muscles. Working them out, among other benefits, can help people age gracefully.

“Core is everything. It is basically your home base of strength. ‘Abs’ used to be the buzzword, but ‘core’ is a more encompassing word,” she says. “Every move you are doing, any functional movement you are doing as a human being, should come from your core.”

“Instead of developing bulk in one area, you really elongate,” says Halfpapp, whose Core Fusion Barre is found at more than two dozen Exhale gyms. They also have 11 DVDs and a book coming out in November.

“It’s a workout that teaches you about your body, about actively working with your body. In those poses, you are isolating your muscles; that’s where the focus is,” says Audra Skaates, who has been teaching barre classes since 2007 and opened the Main Barre late in 2011. “I fell in love with the workout and what it gave me.”

“I’m not aware of any studies that have been published that say it’s that method that is significantly better than any other exercise. Any resistance-based exercise is good for the core,” says Scott Silveira, a registered clinical exercise physiologist at the California Health and Longevity Institute.

“The real secret is that they’ve found a way to make exercise fun and enjoyable,” Silveira says. “I think that is really the magic ingredient.”

Another reason for the barre explosion is that it doesn’t require expensive equipment, such as Pilates reformers, treadmills and weight machines. Commonly, studios have mirrors and ballet barres along two walls. Students also use small hand weights, stretch bands and balls.

Barre exercise classes are traced to Lotte Berk, a dancer in Europe who opened a studio in 1959. A student of hers brought the workout to New York more than a decade later. Halfpapp began teaching barre workouts in 1980, at the Lotte Berk Method studio; at the time it was for women only. And Berk teachers and others opened their own barre businesses — lots of them.

“The popularity is that people feel like they’re not really working out,” Hagendorf says. “It’s for all levels: dancers and those who never danced.”