Gaspar Noe's Love ain't for everyone, and that's okay 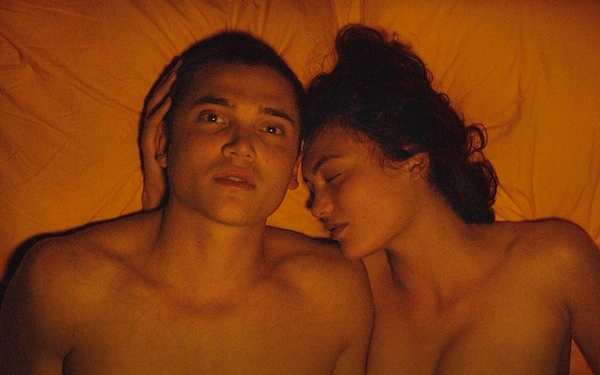 Ah, love. It’s in the air. We all love to talk about it, dream about it, hope for it, or, if you happen to be on the latter end of it, pretend like it’s the worst phenomenon to sweep the planet. But if you’re director Gaspar Noé, you’re sick of movies representing love in lukewarm fashion, where all of the true grit of relationships, both beautiful and profoundly ugly seems to be swept under the rug, never to be seen by the public eye, out of coyness or perhaps purely legal reasons. And so, he gives us the somewhat haughtily titled Love, and it brings all of passion right up to the surface, and past it—in 3D. And there is a big chance you might not like it. I’m still not sure if I do.

And so, I’m using this review to figure out my own stance on the film that has created such a fuss, which started with its premier at Cannes this year. That may be cowardly or indecisive on my part, but its because Noé’s portrayal of the highest and lowest points of a relationship is often emotionally poignant, while also being one of the most self-indulgent cinematic events in quite some time.

The story is uncannily straightforward. A young American named Murphy (Karl Glusman, Stonewall) goes to film school in Paris, where he meets an intoxicating artist, a woman who cannot be ignored, Elektra (Aomi Muyock). Love is the symbolization of their relationship from beginning to end. The major turning point? When they invite their beautiful young neighbor Omi (Klara Kristin) into their bed. What they thought was an adventurous turn in their sexual life would soon prove to be the catastrophic blow. But if you know Noé and any of his past works like Enter the Void (2009) or Irreversible (2002), then you know this straightforward tale is told in anything but a straightforward manner. By jumping back and forth through time, Noé alludes to the psychological state of our main character, Murphy, which, by the end, truly becomes the viewers’.

What we need to get out of the way is the sex—the copious amounts of explicit sex scenes that dot, at regular intervals, Love’s narrative. If you have even the slightest sense of self-consciousness when it comes to expressions of sexuality, you will be uncomfortable with his dedication to cinéma du corps.

The scenes, which are neither choreographed nor staged, are aggressive and unabashed, and that’s basically Noé’s point. To instill the mindset that an integral part of relationships—sex—should not be watered down out of what some might call respect or class. Love embodies the rightful physicality and emotional momentum that goes into such a bond, which alone sets it apart from images of pornography. Cutting away, as most films do, at the climax or at conveniently modest parts of the body, would be a disservice to the actual stakes of love, or so believes Noé.

That all being said, the execution with which Noé argues—no—drives his point home is simply relentless and hedonistic. Although I personally agree that sex should not be shunned from cinematic representation, I also believe that a story still needs to be stimulating, and often, Love stops from engaging and starts to drag. Noé wants to desensitize us with often shocking images, but the real effect is that we just stop caring, not about the gratuitous sex, but about his story and characters. The lengthy 135 minute runtime also seems readily unnecessary.

What this all boils down to is this: if you’re not one to be thrilled by bodily fluids coming at you in 3D, or about twelve five-minute scenes of lust and love, then this Love might not be for you. But then again, maybe it should be, because there are also moments of rich emotion and beauty that cannot be cast aside so easily.

Because Noé’s story, through its script and story arc, isn’t altogether complicated, Love relies on its actors to provide the grip and absorbing drama. Luckily, all three main characters bring, with gumption, that level of dedication to the table. Glusman, with his pained narration and unsteady emotional tides, is a solid force on the screen. Then, when paired with Muyock’s Elektra—a stunning and captivating presence, to be sure—their love affair takes on the appropriate heat, light, and ultimate derailing darkness that so oft trace our love lives.

However, the element that really ties all the hard hits and enigmatic splendor together is Noé’s camera. With cinematographer Benoît Debie (Spring Breakers (2012); Enter the Void) at his side, Love wields the proper juxtaposition of buoyant light and deep unnerving colors that are gorgeously embodied with the 3D element to throw us through the jungles of passionate turmoil. Many shots are molded as tableaus, as set pieces ready to be painted, begging for a full immersion into the film’s world, which is mighty hard to resist.

So, when all is said and done, I’ve come to realize Love is worth seeing, but is also not for everyone. While there’s plenty to scoff about in Noé’s filmic world, there’s also much to be embraced and learned from. He’s an auteur of the age, surely, and he’s ambitiously eager to break the limitations that often hold it back. That alone is an invaluable quality, and I’m happy to have witnessed a little bit of it in Love.