2 top University of Missouri resign as demanded by student protesters 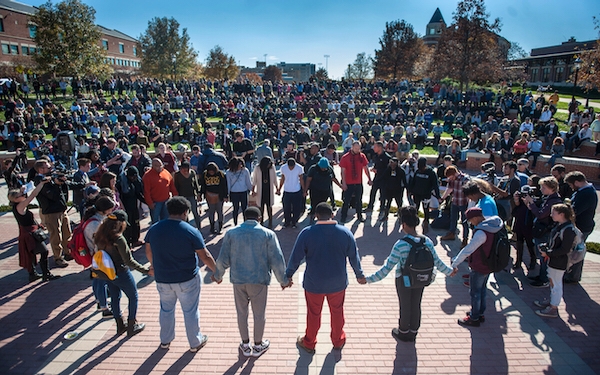 COLUMBIA, Mo. — After a remarkable and swift revolt by students and faculty centered largely on matters of race, the leaders of the University Missouri System and its flagship campus both stepped down from their jobs within hours of each other on Monday.

System President Timothy M. Wolfe announced his resignation just as the university Board of Curators was beginning an emergency meeting over the direction of a campus fractured by protests and accounts of discrimination. His action sent thousands of students to the heart of the campus to celebrate.

Then, by the end of curators’ meeting, Missouri Chancellor R. Bowen Loftin announced he would assume a lesser role.

Donald L. Cupps, chairman of Board of Curators, announced the formation of task forces, the hiring of a diversity, inclusion and equity officer. He promised to make the faculty and staff look more like the student body.

The events focused the country’s attention again on the state, even while images of protests and unrest in Ferguson were still fresh.

Less than two months after the head of the student body wrote a Facebook post about being called a racial slur, events snowballed with such ferocity that by Monday resignations seemed inevitable.

The tensions had escalated last week with a student’s hunger strike and promises from black football players to boycott team activities — a move that ensured the embarrassment of the university system on a national stage, threatened Mizzou’s finances and forced curators to act swiftly.

In October, a black student group said members were confronted by a man in Traditions Plaza on campus who used a racial slur. Also last month, someone used human feces to draw a swastika in a bathroom inside the university’s Gateway Hall.

Students first confronted Wolfe on Oct. 10 by blocking his car during Missouri’s homecoming parade. They were met by chants of “M-I-Z-Z-O-U” from white bystanders trying to shout down the protest.

Some black students accused Wolfe of being tone deaf and not doing enough to address the racism they are confronted with daily.

A statement for the Missouri Students Association on Monday criticized the university’s leadership for meeting the shooting death of Michael Brown last year with silence.

“In the following months, our students were left stranded, forced to face an increase in tension and inequality with no systemic support,” it read. “Over the last 16 months, the quality of life for our students has only worsened.”

Seven percent of Missouri’s 35,000 students are black. Some said that they have endured racial taunts and threats of physical violence.

On Monday, a tearful Wolfe said he would step down.

He urged the campus to “use my resignation to heal and start talking again.”

Wolfe’s voice wavered as he declared that, “My decision to resign comes out of love, not hate.” He then quoted from Psalm 46: “God is our refuge and strength, an ever-present help in trouble.”

Within minutes of the announcement, thousands of students, white and black, assembled at the Carnahan Quadrangle, linking their arms in a human circle hundreds of yards long around the tents that have sprung up in recent days as a part of the protests.

In the middle of the circle, members of the group Concerned Student 1950, who had organized many protests, pumped their fists in the air, shouting: “They said we couldn’t do this,” and “I believe we have won.”

Jonathan Butler, who is pursuing a master’s degree and was on hunger strike calling for Wolfe’s resignation, was met with cheers when he showed up to the quad.

At a news conference, Shelbey Parnell, a Concerned Student 1950 member, said Wolfe was a very reactionary leader. “While he was in his position, he was a businessman and that’s why we needed him out. We need an educator where an educator is supposed to be.”

Gov. Jay Nixon called Wolfe’s resignation “a necessary step toward healing and reconciliation on the University of Missouri campus.”

Lt. Gov. Peter Kinder, a Republican who is seeking the GOP nomination for governor next year, said in a radio interview shortly before Wolfe’s resignation that the students had no legitimate authority to drive him out, and were seeking “governance by mob rule.”

In Washington, White House press secretary Josh Earnest praised protesters for showing that “a few people standing up and speaking out can have a profound impact on the places where we live and work,” according to The Washington Post.

Meanwhile, curators kept meeting, discussing another key personnel change. And other top university officials, who also blamed Loftin for the lack of cultural and racial sensitivity campus as well as for other issues, capitalized on the on the momentum.

Loftin had been criticized for a decision to scale back tuition waivers for graduate assistants and strip them of their health insurance subsidies. After public outcry, the university reinstated the subsidies and agreed to leave the tuition waivers in place for a year. He also came under fire after the school discontinued the clinical privileges of a Planned Parenthood physician and terminated multiple relationships with different Planned Parenthood affiliates in September.

“The environment on campus is not conducive to moving forward, resolving issues and trying to make sure that all of our students are in a good learning environment,” said David Kurpius, dean of the Missouri School of Journalism.

Loftin was called into the curators’ meeting around 3 p.m. He surfaced about an hour and a half later, and stood at the same podium where Wolfe resigned that morning.

Starting next year, Loftin announced he would transition from the role of chancellor to a “new role where I will work with many people across the university and with the system to advance our mission.”

Cupps said that curators would find an interim system president soon. No details about a severance package or any other changes in compensation were immediately available.

Asked if curators would meet with members of Concerned Student 1950 as the group had demanded, Cupps remarked that he was just focused on getting through the day, but would be willing to sit down with any group.

David Alan Sklansky, a Stanford Law School professor and faculty co-director of the Stanford Criminal Justice Center, views the Missouri protests as an outgrowth the the Black Lives Matter movement that was triggered by events in Ferguson.

“It might embolden students elsewhere to speak out about aspects of their college experience when they believe they are not being treated as a fully fledged member of the community,” he said.

Emily Dickens, vice president for public policy of the Washington-based Association of Governing Boards of Universities and Colleges, said the upheaval provides an opportunity for the University of Missouri’s board of curators.

“A public university has a public agenda and an academic agenda,” Dickens said. “The needs of addressing civil rights and diversity and racism are some of the things that a university can take a lead on. After Ferguson, the students saw that the university could have taken a stand. Students are looking for leadership.”

Dickens said the board took the right approach to lay out the steps it will take in searching for new leadership. “The board coming out with their plan is a great step,” she said. “They’re out front saying, this is what we’re going to do in the next few weeks.”

For the past few days, University of Missouri students had erected a tent city in Carnahan Quadrangle with about 50 students occupying the space.

On Monday evening, as the sky grew dark, only about 20 students remained while reporters looked on. The tents remained.