Polyphonic Spree joy has its roots in deep sadness 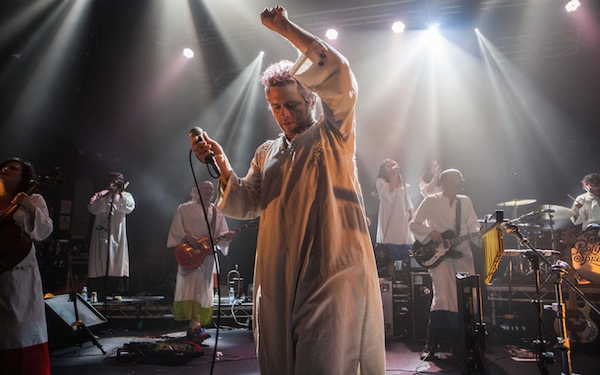 For a band known for exuding love and joy, the Polyphonic Spree rose from the ashes of great sorrow. Band founder Tim DeLaughter formed the group 15 years ago in the wake of a beloved friend’s death.

The singer, songwriter and guitarist had spent nearly the entire 1990s in the psychedelic rock band Tripping Daisy. His bandmate, guitarist Wes Berggren, died of a drug overdose in fall 1999. By the following December, Tripping Daisy had disbanded as a group.

A year later the Polyphonic Spree was born, a large orchestral pop-rock outfit known for its effusive theatrics. Shortly after forming, the band recorded a 10-song demo, which was later released as the group’s first album. Did Berggren’s tragic passing influence those initial songs?

“Without a doubt,” says DeLaughter, calling from a tour stop in Athens, Ga. “It was one of the most devastating times in my life. Wes wasn’t just our guitar player. He was a dear friend. It knocked me off my feet when it happened. I had just lived through the ‘90s being in my 20s. We could be extremely destructive to ourselves. When (Wes died), it showed me how fragile we were. It gutted us all. A lot of the lyrics of our first record were a direct reaction to that.”

It has been a long and circuitous road for this high-energy outfit with its charismatic frontman and rotating cast of musicians. In the past, band members have numbered as many as 28, including the musician and singer-songwriter Annie Clark who went on to solo fame as St. Vincent. For this tour, there will be 18 musicians and singers on stage.

Polyphonic Spree’s soaring sound is built on the traditional rock lineup of electric guitar, bass and drums combined with a wide range of symphonic instruments including cello, chimes, horns and a vocal choir. To accommodate the sprawling ensemble, the band travels on a bus normally used to transport hockey teams.

The wildly energetic stage show is a mix of gospel choir fervor and frenzied ecstasy. With its unabashedly sincere and positive outlook, the band has never been in step with the snarkier side of pop culture.

“We live in a cynical world and God knows I’ve experienced all the sarcasm and cynics in the world with this band,” DeLaughter says. “But I am who I am, and I’m doing what I’ve been doing my whole life. The Polyphonic Spree keeps going. I’m still talking about it 15 years later. Everyone doubted but us. And here we are.”

When DeLaughter formed the group, he thought he was just coming up with the concept and orchestrating the first show. Initially he didn’t foresee himself being a featured player, let alone fronting the large ensemble on the road. But after the group pulled off a well-received debut gig in its Dallas home base, he began to think the band might have legs.

Not everyone felt the same. In the beginning there were naysayers skeptical that this hard-to-categorize group could make a go of it in the post-grunge era. They also insisted that such a large band would be a logistical nightmare on the road.

DeLaughter was undaunted and pushed forward. The going was indeed tough at first. “We couldn’t get gigs because we were too big,” he recalls. “There were club owners and promoters who just didn’t get it. That’s when we made the CD ‘The Beginning Stages of … ’ in three days as a demo.”

With that promotional release in hand, the group started playing as many venues as possible. They landed a fortuitous slot at the 2002 South by Southwest Music Conference. That year, The Band’s legendary guitarist and songwriter Robbie Robertson was scheduled to give the event’s keynote address. Polyphonic Spree was booked to play an opening set before his speech.

“It was at 8:30 in the morning, the worst gig you could possibly get,” DeLaughter remembers with a laugh. “We played and it turned out that every journalist in the country was there to cover Robbie Robertson’s speech. We got a standing ovation. We just killed that show.”

The showcase instantly changed the band’s fortunes and kicked its career into high gear. A lot of important folks took notice. Two weeks after the South by Southwest appearance, DeLaughter got a call from David Bowie. The British rock star was curating the Meltdown Festival in England and wanted the band to fly to London to play the fest.

“When we got over there the band blew up big time,” DeLaughter recalls. “There were huge bidding wars for the band. It was unbelievable how fast something so unorthodox took off. Never in a million years did I think it could happen, but it did.”

The Polyphonic Spree has since toured the world several times over. It played the Nobel Peace Prize Concert in 2004 and made guest appearances on the TV series “Scrubs” and “Las Vegas.”

With its robed costumes, confetti machine and upbeat music and lyrics, the band’s shows resemble high-octane tent revivals. “I grew up in the South,” DeLaughter says. “My grandfather was a preacher. I went to big ole Baptist church throw-downs when I was a kid. I’m not dialed into any of those religions, but I do love the spectacle.”

A Polyphonic Spree concert feels much like a secular church service with lots of jubilation, dancing, clapping, singing and positive vibes. Does DeLaughter hear from fans who feel a spiritual connection to the music?

“Oh God, yes,” he says. “Big time. A lot of people come up after a show, or write through email or social media, and tell me how much this band means to them, how it saved their life and how it’s made such a difference. People have told me they wanted to kill themselves and all of a sudden they listen to Polyphonic Spree and they change their minds. It’s testimony after testimony. There is a spiritual element that is definitely in the air with this band.”

There is also a strong feeling of community in the crowd. DeLaughter is passionate about engaging his audience.

“It’s liberating to let your guard down and a Polyphonic Spree show is a safe place to do that,” he says. “You’re with like-minded folks. It can really turn into something special. We can get engaged and go there for a couple hours. You’re going to leave feeling a little lighter than you did when you walked in.”