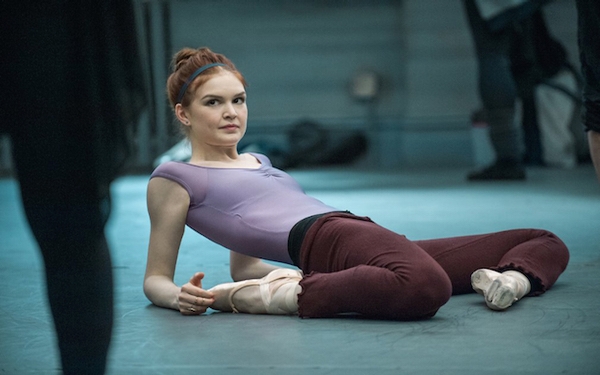 NEW YORK — When Sarah Hay, a soloist with the Semperoper Ballet in Dresden, Germany, got an email a few years ago asking her to audition for a new TV series about dancing, she assumed it was a reality show and was understandably apprehensive.

Then Hay, a Quentin Tarantino fan, noticed that Lawrence Bender, producer of films like “Reservoir Dogs” and “Pulp Fiction,” was attached to the project as an executive producer. “I thought, ‘Oh, maybe this is going to be something,’” said Hay, wearing jeans and a ponytail and looking younger than her 28 years. “I started doing some research and just thought, ‘What the hell, I’ll try.’”

The gamble paid off: After a nerve-racking audition process, Hay was cast as the lead in “Flesh and Bone,” a drama set in New York’s brutally competitive ballet world and created by Emmy-winning “Breaking Bad” writer Moira Walley-Beckett. The limited series opens on Starz on Sunday night, when all eight episodes will also be available to watch on demand or via the network’s streaming platform, Starz Play.

Hay stars as Claire Robbins, a preternaturally gifted dancer who flees a traumatic home life in Pittsburgh to pursue her dreams in New York. Though she is an unknown, Claire swiftly lands a position at the prestigious but financially troubled American Ballet Company and becomes a favorite of its artistic director Paul Grayson (Ben Daniels), a man who brings new meaning to the word “volatile.” The arrival of a wide-eyed ingenue stirs jealousy among the other dancers, including Mia, Claire’s promiscuous roommate (Emily Tyra), and Kiira, an aging prima ballerina (Irina Dvorovenko).

Starz seems to have picked an opportune moment for a series about ballet. Thanks to Natalie Portman’s Oscar-winning turn in “Black Swan,” the crossover stardom of Misty Copeland and, yes, even reality shows like “Dancing With the Stars” and “So You Think You Can Dance,” popular awareness of dance is at a strong point.

Like ice skating and gymnastics, ballet is a beautiful but punishing discipline that attracts a passionate breed, making it an ideal subject for a storyteller. As Hay put it, “If you put a lot of people with big personalities in one room, you can always count on some drama.” Indeed, sometimes reality is even wilder than Hollywood fantasy. Consider Sergei Filin, the artistic director of Moscow’s Bolshoi Ballet, who was nearly blinded in an acid attack carried out by a disgruntled dancer in 2013.

And even though Hollywood has long been fond of stories about young people, usually women, falling in love and overcoming adversity through dance, “Flesh and Bone” breaks new ground in its authenticity, according to Walley-Beckett and her collaborators.

Not only does the series feature professional dancers rather than artfully edited actors, it also portrays the uglier aspects of ballet — the eating disorders, sexual exploitation, psychological warfare and chronic physical pain — with an unflinching savagery made possible by its berth on premium cable. For added realism, Walley-Beckett interviewed many dancers and incorporated some of their most harrowing tales into the narrative.

“I know ‘dark’ is a term that’s bandied around a lot in television these days,” said Daniels, “but there’s glossy dark and then there’s ‘Flesh and Bone’ dark, which is like a slate dark. It’s fearless.”

There are few people in Hollywood better suited for a gritty ballet series than Walley-Beckett, a dancer turned writer with an affinity for complex, character-driven drama and firsthand knowledge of ballet’s many contradictions.

“It gives you these enormous advantages and enormous disadvantages,” she explained. “It teaches you incredible discipline — mental, emotional and physical. It also punishes you emotionally and in the relationship with yourself in the mirror. When I stopped dancing professionally I went into recovery.”

Walley-Beckett seems to channel this obsessive energy into her writing. Well before anyone was paying attention to “Breaking Bad,” she became fixated, even sending creator Vince Gilligan an episode she wrote on spec — a huge industry no-no. When to her surprise he asked her to join the writing staff, it was an easy decision.

“I never fit in on network TV,” she said. “Going deep into the intricate aspects and darker impulses of human nature has always been appealing to me.”

She’s not kidding: Walley-Beckett won an Emmy last year for writing “Ozymandias,” the brutal final-season episode of “Breaking Bad” that fans remember as The One Where Walt Makes That Phone Call to Skyler. (Daniels describes it as “the closest that I’ve seen to a television episode unfolding like a Greek tragedy.”)

While she was still on staff at “Breaking Bad,” Walley-Beckett was approached by Bender and his producing partner, Kevin Kelly Brown, about the possibility of developing a ballet series. Like Walley-Beckett, both men are familiar with the milieu: Bender studied dance and Brown comes from the well-known family of dancers who inspired the Oscar-nominated 1977 film “The Turning Point.”

The project was an obvious fit for Starz, which had been building a reputation as the premium cable destination for female-oriented drama series such as “Outlander” and “The White Queen.” “I’d always been interested in the ballet world and the intense discipline and artistry that goes into it,” said Carmi Zlotnik, managing director of Starz.

The network also has a keen eye for talent, plucking female leads like “The White Queen’s” Rebecca Ferguson (recently seen opposite Tom Cruise in “Mission: Impossible — Rogue Nation”) and “Outlander’s” Caitriona Balfe out of relative obscurity.

The quest for Claire “was like looking for a unicorn,” said Walley-Beckett, who was adamant that the series cast real dancers with acting ability rather than the other way around. “The verisimilitude is of paramount importance to me. The subject matter is so visceral.”

When producers failed to find their Claire after a nationwide search, they decided to cast a wider net. Ethan Stiefel, a consultant and choreographer on the series and former principal dancer at American Ballet Theatre, reached out to some dancers he knew in Europe, including Hay.

Having grown up in a New Jersey family with strong ties to classical music — her brother is an opera singer and her grandfather was in the New York Philharmonic — Hay has been dancing “from birth,” she said. “As a kid, I was always in a costume, always building up pillows in the living room and coming out of them with Prokofiev playing and wanting to tape it.”

Hay began to train seriously at age 7, but as she entered her teens and her body no longer conformed to ballet’s sinewy, almost pre pubescent, ideal, teachers began to nudge her toward other forms of dance. She stuck it out, dancing with North Carolina Dance Theatre, Pennsylvania Ballet Company and Los Angeles Ballet. But she failed to thrive until she settled in Dresden, where she was given a solo within a month. “They like that I’m curvy. They think I’m sexy, which is not a word you hear very often in America when referring to ballet dancers.”

Before she was cast in “Flesh and Bone,” Hay had appeared as a featured extra in “Black Swan” but gained little in the way of acting experience on the set of the Darren Aronofsky film. “For the most part I was just sitting on the floor staring at Natalie Portman,” she said dryly.

More useful was her own dancing, which Hay has always tried to infuse with emotion. “To me, acting is really important in dance,” she said. “Audiences don’t remember the 16 pirouettes you did or whatever, they remember the death scene when you made them cry. I had to focus on acting because I’m not the most perfect dancer or body type.”

Understandably, Hay was anxious about taking six months off from ballet to film the series. “There’s this saying in the dance world: If you take a week off you can feel it, and if you take two weeks off other people can see it.”

So it helped that the production was run like its own mini dance troupe, with daily rehearsals designed to keep the ensemble, which included Dvorovenko, a former principal dancer at American Ballet Theatre, and Sascha Radetsky, also a veteran of ABT, in peak condition.

Daniels was invited to sit in one of the practice sessions and recalls the physical toll wrought by the dancers’ graceful, seemingly effortless movements. “I found it incredibly moving to see the sheer ugliness of the dancers bent double, gasping for breath with blue lips,” he said, “while in the middle of the room they’re smiling like angels.”