‘The Night Before’ is an instant Christmas classic: naughty, but nice 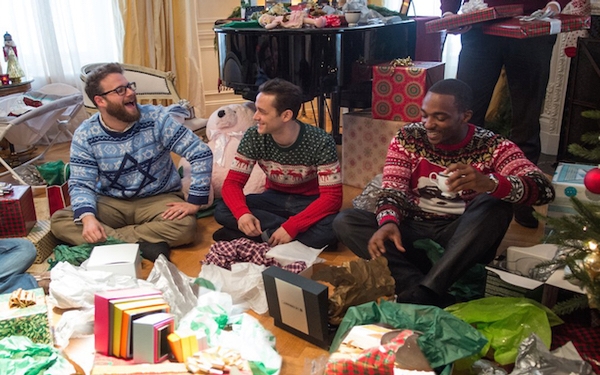 Directed by Jonathan Levine, “The Night Before” proves the stoner comedy and the holiday movie to be a surprisingly wonderful combination. An instant classic, the film features plenty of nice characters doing very naughty things to celebrate the season. But fortunately for audiences, this updated twist on seasonal cheer isn’t a lump of coal, with a warm-hearted message to be found amongst all the Christmas Eve mischief.

For 10 years, Ethan (Joseph Gordon-Levitt) has celebrated Christmas with his best friends Isaac (Seth Rogen) and Chris (Anthony Mackie), getting drunk and stoned, eating Chinese food, and singing karaoke. What started as a way to cheer him up after his parents’ death has turned into tradition, but while his friends have grown up and moved on, Ethan hasn’t. With a baby on the way for Isaac and newfound football fame for Chris, this is their “last Christmas” and Ethan’s got designs on a mythic, mysterious party, The Nutcracker Ball.

What ensues is one wild night on the town, where the friends try to commemorate their party hardy past, while also confronting demons of their own. Rogen’s Isaac has by far the funniest arc of the film. Gifted with a stash of drugs by his uber-cool pregnant wife Betsy (Jillian Bell), Isaac goes on the trip of his life, and ends up exchanging sexy texts with a mystery suitor, chatting with a friendly nativity scene, and memorably, freaking out at midnight Mass while wearing a Star of David sweater. Rogen makes the most of his gifts for physical comedy and nonsensical wordplay, but the sweet eagerness and trepidation that he brings to Isaac round out the character fully.

Mackie is unleashed in the role of the newly famous, nearly manic baller, and the actor is reveling in the freedom of the role. That leaves Gordon-Levitt stuck playing the straight man, and his Ethan is rather bland. His pining over ex Diana (an under-utilized Lizzy Caplan) is fairly standard-issue movie romance stuff. Surrounded by scores of character actors and celebrity cameos, his performance fades to the background. But that leaves room for the inimitable Michael Shannon as a drug dealer peddling green that unlocks the Ghosts of Christmases Past, Present and Future, and a wild turn from “Broad City” genius Ilana Glazer as a sexy, thieving Grinch.

The references to canonical holiday classics is what cements “The Night Before” in the legion of Christmas fare. Tracy Morgan takes on the “The Night Before Christmas” poem and makes it his own, and there’s a little thrill when the familiar strains of Tchaikovsky’s Nutcracker Suite greet the friends at the ball. References to “Home Alone” also make it into the film — there’s almost not a holiday classic that goes untouched.

For all the drinking, drugging, sexing, swearing, and sucker-punching, “The Night Before” works because its heart is in the right place — you might even say that its heart grew three sizes that night. It’s a story about how friends are your family, and even the most imperfect of Christmases can be great when you’re with the ones you love. “The Night Before” is a hilarious, heartfelt shot in the arm that offers a much-needed antidote to treacly holiday fare.

Rated R for drug use and language throughout, some strong sexual content and graphic nudity.