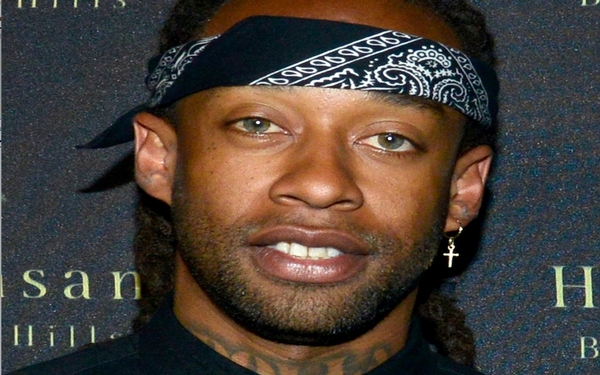 LOS ANGELES — Ty Dolla Sign’s voice is blaring through the cavernous Hollywood recording studio as the smell of freshly baked chocolate chip cookies and marijuana compete with each other.

The 30-year-old singer/songwriter/producer/multi-instrumentalist born Tyrone Griffin Jr. is playing an electrifying funk groove he cut with Sean “Puff Daddy” Combs called “You Could Be My Lover.” The collaborative song was released earlier in the day, and he wanted to play it for the small entourage gathered in the studio.

“You should have put this on your album,” someone shouted over the music. They were referring to the artist’s new, long-awaited debut, “Free TC.” But Griffin, lost in the groove, danced around the room as he ad-libbed lines, belting out freestyle lyrics in between puffs from a plump joint.

His voice — instantly recognizable by its gruff sandpaper texture — has helped popularize the minimal synth-and-bass driven brand of rap dubbed “ratchet.” Along with his frequent collaborator and friend DJ Mustard, the two have helped redefine West Coast hip-hop the same way Dr. Dre and Snoop Dogg did in the early ‘90s alongside Nate Dogg (to whom he’s often compared).

“I’ve been building slow, step by step. And now it’s happening. It feels good,” Griffin said. “But I want to keep it going. Now it’s time to work even … harder. I’m never satisfied. I want to get to the next level.”

Since his 2010 breakout in YG’s raunchy anthem, “Toot It and Boot It” — a song he co-wrote and produced — the L.A. native, who recently bought a home in Long Beach, has become the go-to artist for smooth, melody driven hooks.

Griffin has appeared on songs from Big Sean, Game, Wale, Wiz Khalifa and Kanye West, who invited him to Mexico for album sessions that yielded roughly nine songs, including “Only One” and Rihanna’s “FourFiveSeconds.” He’s written for Trey Songz, Snoop and Khalifa. And remember “Loyal,” that Chris Brown ear worm you couldn’t escape last year? Griffin penned it.

The lush, hedonistic blend of R&B and rap he’s synonymous with has anchored a series of well-received mixtapes, and his stellar 2014 EP “Beach House” spawned hits such as “Or Nah,” which went platinum, and “Paranoid,” a radio staple more than two years after its original release.

His debut, “Free TC,” was inspired by his younger brother, Gabriel “TC” Griffin, who was convicted of a 2004 gang-related murder and served with a 67-years-to-life sentence. Released recently through Atlantic Records and Khalifa’s Taylor Gang Records, it’s one of the year’s more anticipated albums. On it Griffin mixes the personal with his own commentary on the penal system — and offers his strongest play toward pop stardom yet.

“It’s crazy; I put out how many mixtapes, four or five (he’s actually credited with seven), and now they mess with us,” he said, laughing. “It happened quick for other artists. Some people can just put out one song and it (becomes) the biggest in the world. But I’ve been working toward this.”

Since his arrival, Griffin has often been categorized as a rapper. He’s certainly largely informed by the genre, his raw tales about street life and unbridled hedonism in line with what many emcees are spooling, but he’s a traditional R&B vocalist at heart with the pedigree and sensibility of a classically trained musician.

His father, Tyrone Sr., was a member of the funk band Lakeside (he now plays with Griffin’s band), his uncle played with the Isley Brothers and Griffin’s list of favorite musicians includes Jaco Pastorius, Victor Wooten, George Benson, George Duke and Freddie Hubbard.

Griffin grew up in South Central L.A., where he learned to play several instruments, including bass, guitar and drums. He jokes that he’s unsure if his violin playing made the album, but he’s more proud to have been able to spend $60,000 on string arrangements and an orchestra for the project.

“I grew up around a lot of church musicians. I wanted to make music that would make my dad go, ‘Oh, wow,’” he said, albeit with profane language to punctuate his excitement.

With “Free TC,” Griffin aims to go from a hip-hop outlier to a major pop player.

Combs, West, Kendrick Lamar, Future, Fetty Wap, R. Kelly and Brandy are among the guest collaborators. And he pulled from the pedigree that’s informed his musicianship to bring a stripped-down acoustic flair to his randy R&B (as in “ratchet & blues”). He even expanded his sonic palette to include pop hit-makers Benny Blanco and Stargate, the latter producing a dance track so catchy it’ll easily rule dance floors from Compton to Ibiza.

Despite the success of his mixtapes, Griffin felt like he was holding back musically — something he sought to rectify with his debut.

“When I first started, I made a lot of music like (what’s on the album), with lots of textures and getting people to come in and play crazy (stuff),” he said fumbling with a pack of sour candy. “Then I started making it simpler. The simplicity works. But I had to do me. Hopefully people love it.”

That doesn’t mean the new material has strayed from being unabashedly filthy — this is, after all, a man whose most famous song is about juggling multiple girls and contains about 21 usages of the word “bitch.” He follows a lighthearted strummer with Babyface with a ballad featuring the hook, “Horses in the stable that I can ride.” (“I’m saying she’s beautiful … and well fed and well groomed. A female (Tish Hyman) wrote it, and she’s a genius for it,” he offers with a mischievous laugh).

Spend an evening with Griffin and it’s clear that there’s little that separates him from his alter ego on record. On the way to filming a music video with rapper and labelmate Currensy (yet another song he’s featured on right now), he offered lots of frank sex talk and sophomoric humor — none of it printable here.

It’s a likely distraction from the heaviness that’s followed him ever since his younger brother was locked up.

Speaking about his brother, who he maintains is innocent, Griffin grew sullen.

“Every time I hear ‘Miracle,’ I feel a certain type of way,” he said, referring to the album cornerstone that has his brother singing an impassioned verse from prison. “Having all of this, I can’t really enjoy it without him.

The album isn’t just a tribute to TC — its cover is a close-up of Griffin’s “Free TC” knuckle tattoo pressed against the glass partition of a prison visiting room and album interludes are recorded phone calls between the two — but the singer’s way of trying to raise awareness of cases like his brother’s. Proceeds from the album’s sales, he says, will go toward an appeal.

“(Screw) a chain, or all the rap-guy kitsch,” Griffin said. “What can I do with all these eyes on me? I could change the world instead of doing what they expect of me. (I’d rather) buy a gang of property in my old neighborhoods and give people a chance to have a nice, clean neighborhood. I just want to do fly stuff for the people with the time I have here — and I will, trust me. But first, I need to get my brother out.”