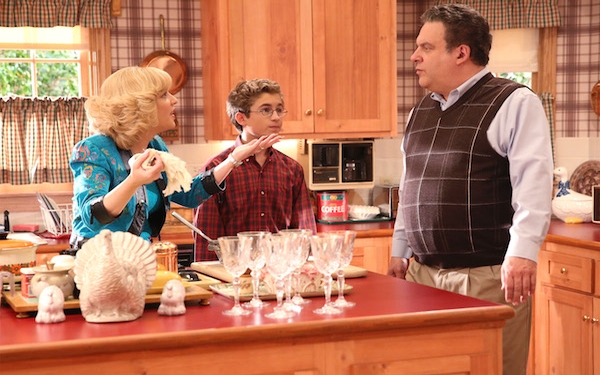 LOS ANGELES — Each week, “The Goldbergs” take viewers on a trip back to the 1980s. It milks humor out of some of the iconic elements of the decade.

It wasn’t a great decade. TV gave us such major flops as “AfterMASH,” “Casablanca” and “Manimal.” Then there were the films “Leonard Part 6,” “Bolero” and “The Lonely Lady.” It was the time of big hair bands, big shoulder pads, Milli Vanilli and the Rubik’s Cube.

These are all prime targets for humor. The cast and crew love poking fun at the decade.

“I hate all the fashions of the ‘80s. None of them need to come back in daily life. I’m pretty much horrified every day when I get dressed, but it’s what the character would wear,” says actress Wendi McLendon-Covey. “Do you remember when geese were a thing in the ‘80s? You would decorate your house with little geese that had bows around their necks?

“That makes me laugh. Why did we think that was cute?”

It’s a good thing geese were popular because they have stuck with series creator Adam F. Goldberg. He’s turned his memories of his family from that period (with a little help from videos he made at the time) to create one of ABC’s top comedies.

Goldberg has been willing to reveal embarrassing moments about himself and his family for comedy. He used actual video of himself dressed as Liza Minnelli, which his mother made him wear, in the TV show.

Then there was the New Kids on the Block video he made, or one based on the song “The Cat’s in the Cradle.”

There are certain home videos of Goldberg’s that will never be shown because they are too embarrassing. He also has to be careful not to mention certain things in the writer’s room or they will become part of the series.

One way Goldberg had planned to get around the more embarrassing videos was to change the name of the family. He finally decided to stick with his own family’s story.

Much of the show is based on events in the ‘80s, but the cast is certain “The Goldbergs” has an appeal beyond the decade.

Hayley Orrantia, who plays Erica Goldberg, is convinced every family, no matter what background they come from, can watch this show and say that person reminds them of their mother or that’s the same relationship they had with their brother.

There are so many things about the 1980s, Goldberg is certain the series can go on as long as the network wants.

“I don’t really specify any kind of time. In fact, I haven’t even aged the kids yet in terms of their grades, and no one’s even really seemed to notice. So it’s definitely not chronological,” Goldberg says. “They’re like ‘The Simpsons.’ It’s basically a live action ‘Simpsons.’

For the record, “The Simpsons” started as a short on “The Tracy Ullman Show” in 1987, proving that not everything about the decade is bad.