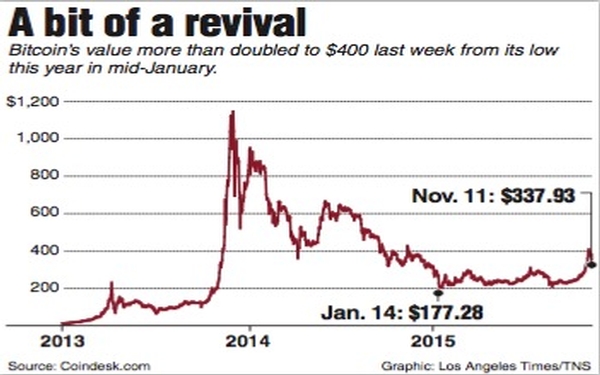 NEW YORK — Long off the public radar, digital payment network bitcoin has been gaining momentum this fall, bolstering the views of some advocates that bitcoins will be a mainstream currency worldwide in the not-too-distant future.

The value of a bitcoin surged to more than $400 last week from its low this year of $177.28 in mid-January. Meanwhile, the technology known as blockchain that underlies bitcoin trading is slowly being adopted for uses far removed from currency.

Analysts also are getting more bullish on the bitcoin system.

“We believe bitcoin and its associated blockchain technology have the potential to disrupt the existing financial infrastructure over the next several years, and believe the value of the bitcoin currency will benefit from this trend,” Gil Luria, an analyst at Wedbush Securities in Los Angeles, wrote in a research report last week.

For the last three years, the virtual currency has struggled with wild price fluctuations that hit more than $1,100, a murky regulatory status and its use on the Internet’s dark side, including drug sales.

Though the price had fallen since last week and hovered around $330 on Thursday, the recent rally has renewed more favorable attention on the virtual currency than it faced early last year in the collapse of the biggest bitcoin exchange, Mt. Gox.

The price of a bitcoin surged passed the $400 mark last week for the first time in more than a year before pulling back, but it’s still up 25 percent in the last month and more than 72 percent from its January lows. Although the reasons for the recent rally are unclear, analysts point to an upsurge in bitcoin trading in China as one reason for the growing momentum, saying the surge may reflect attempts to move money out of the country as the economy slows and financial markets fluctuate.

Luria said the price bump also may have been partly driven by recent Chinese regulatory changes allowing for easier transfer of money out of conventional bank accounts to bitcoin exchanges. But he said deeper currents also have been pushing up the price.

“The long-term price is driven by how many people use it for actual economic applications,” he said. “The price of bitcoin has sort of caught up to the usage.”

In his report, Luria said that the number of bitcoin transactions per month has grown from about 1 million in October 2012 to more than 4 million last month, and he forecasted a price target of $600 a year from now. He estimated that the market for online payments, money transfers and other uses for bitcoin will grow from about $8.6 billion last year to about twice that by 2025.

“The fluctuations that happen day-to-day don’t matter,” said Jerry Brito, executive director of Coin Center, a nonprofit virtual currency research center, noting that deeper trends are embedding the currency in the economy. “It’s part of a long march toward normalcy.”

Under a federal court order last week, the U.S. Marshals Service sold 44,341 bitcoins worth more than $17 million in its fourth bitcoin auction of assets seized in the prosecution of Ross Ulbricht, founder of the online black market Silk Road. The government sale of bitcoins is seen as one more mark of legitimacy for the currency as a store of value.

To be sure, Bitcoin has a long way to go. The total value of bitcoins is still a little more than $6 billion, a rounding error in the multitrillion-dollar currency markets.

As a decentralized digital currency that uses peer-to-peer technology to operate without a central authority, bitcoin potentially has a large effect on the international money exchange and transmission business now dominated by big banks and players such as PayPal and Western Union.

Meantime, the blockchain technology has even wider applications.

The blockchain is a giant ledger, or spreadsheet, that anyone with an Internet connection can access. However, its entries can’t be changed, only added to, allowing transactions to be tracked permanently and theoretically enabling the low-cost, verified exchange of a wide range of assets.

A startup, OneName, has garnered attention with technology that aims to allow users to claim a single, secure identity that can be used across the Internet.

This year, the Nasdaq Stock Market launched a pilot ledger, known as Nasdaq Linq, using the blockchain to keep track of and transfer the securities of non-public companies. Adam Ludwin, chief executive of Chain.com, which is providing blockchain technology for the exchange, said the idea was a natural extension to tracking and transferring virtual money.

“What we’re saying is, why shouldn’t other assets function this way?” he said.

A report released Wednesday said that major banks could start using blockchain technology to track syndicated loans as early as next year. The report, by New York research firm Tabb Group, said the use of the blockchain for such complex tasks as securities trading is probably a decade away but the potential for the technology is nonetheless far-reaching.

A consortium of major banks led by financial technology firm R3 is developing a framework for applying blockchain technology to capital markets. In September, the consortium added Bank of America, Citigroup, Morgan Stanley and Deutsche Bank, bringing membership to more than 20.

Meanwhile, states are positioning themselves as the most hospitable environment for bitcoin startups while protecting consumers against blowups.

New York this year issued its much-anticipated BitLicense, but then suffered a backlash amid industry complaints that the license’s requirements were ambiguous and unduly onerous.

In California, Assemblyman Matt Dababneh, a Democrat, introduced a bitcoin licensing bill that has gained widespread, if not universal, industry support. The bill, which has passed the Assembly and made it to the Senate floor, is expected to brought to a vote in the next session.

A spokesman for the California Department of Business Oversight said the department is working with Dababneh and other stakeholders on the bill.

“California is the natural home of bitcoin,” Dababneh said. “We want to keep it and have it flourish in our state.”